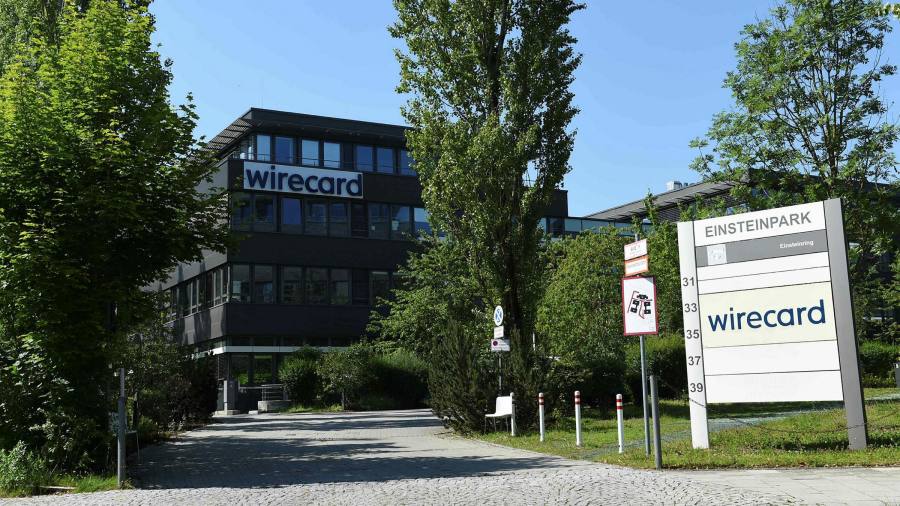 Wirecard collapsed on Thursday as the once high-flying German payments service provider announced it would file for insolvency following revelations of a multiyear accounting fraud.

The Aschheim-based technology company, which a week ago had a market value of €13bn, said in a regulatory statement that it faced “impending insolvency and over-indebtedness”.

It is the first insolvency of a member of Germany’s Dax index of blue-chip companies in its 32-year history. Wirecard shares, down 90 per cent in the last week, were suspended for one hour shortly before the company’s announcement that it will file an application for insolvency at the Munich district court later today.

The unravelling began a week earlier, when Wirecard announced that €1.9bn of cash was “missing” and it could not file accounts, prompting urgent negotiations with the banks owed €2bn. A further €1.4bn of debt, issued in September last year, is also outstanding.

The insolvency puts the future of Wirecard Bank, a fully-owned subsidiary of the group, in doubt. Germany’s financial watchdog BaFin earlier this week appointed a special supervisor in an attempt to ringfence the lender — which has €1.9bn in total assets and is a member of the deposit protection scheme of the Association of German Banks — from the stricken group.

BaFin and the Association of German Banks were not immediately available for comment. Wirecard said it was “currently evaluating whether insolvency applications have to be filed for subsidiaries”.

Wirecard is a member of the Visa and Mastercard networks, responsible for collecting for money for credit card payments and distributing it to thousands of businesses.

The true scale of its business and the extent of its customer base is unclear. The dramatic collapse caps a turbulent 18 months spent fighting whistleblower allegations of accounting fraud reported by the Financial Times.

Wirecard was audited by EY for the last decade. In 2018, the last year for which accounts are available, the group claimed to process €125bn worth of credit and debit card transactions, on which it generated €2bn of revenues.

As much as half of those sales appear to have been fabricated, according to a KPMG report on a special audit of the group published in April, and documents reviewed by the Financial Times.

The suspect outsourcing arrangements were the supposed source of the €1.9bn in cash which appears to have never existed, and the “lion’s share” of the €1bn in operating profit Wirecard reported between 2016 and 2018, according to KPMG.

The apparently fake business was booked by Wirecard units in Dubai, Dublin and Munich which dealt almost exclusively with the outsourced payments processing, according to KPMG. The rest of Wirecard’s 40-plus businesses were collectively lossmaking in 2018, based on its own disclosure of each unit’s performance.