For the past nine years, Jessica Tucker has earned $7.50 an hour working at a bulk laundry company in Greenville, Mississippi, which services several hospitals in the state as well as neighbouring Louisiana and Arkansas. Even at the best of times, it is gruelling work. The 100 or so employees, most of them African-American, wash and sort dirty linen in a damp, poorly-ventilated room that is prone to flooding.

When coronavirus forced Mississippi to shut down its economy in early March, Ms Tucker and her colleagues were classified as essential workers, meaning they had to keep reporting for work. But the laundry company took few extra precautions to protect their safety, she says: social distancing was not enforced and the employees had to buy their own disposable masks and gloves.

Now they fear they will catch the virus from the sheets, which arrive daily covered in blood, faeces and urine. “People say it’s a blessing to be working, but it’s a risk,” Ms Tucker, 41, says. “We got family, and we’d rather be at home just like everybody else doing quarantining.”

When protests erupted in the US in response to the killing of George Floyd on May 25, the anger over police brutality was also fuelled by a sense of simmering injustice over the impact of coronavirus. Not only have black people died from the disease in disproportionately high numbers: there are early signs they will bear the brunt of the economic fallout too. 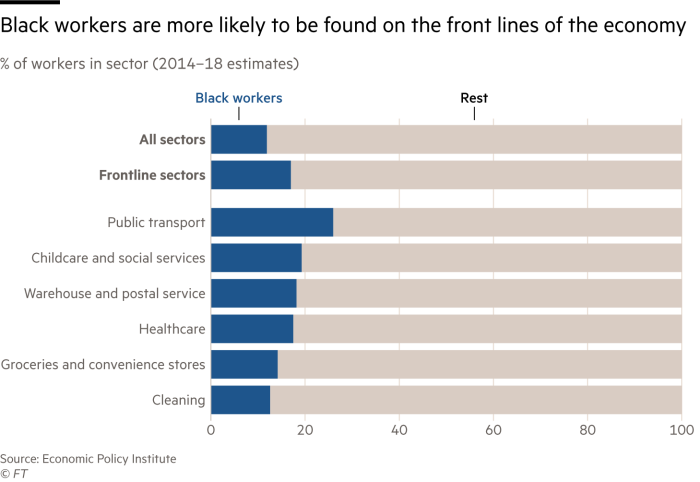 The preponderance of black workers in jobs that have been deemed essential, such as those in public transportation and healthcare, is but one reason the African-American community has been hit so hard by the worst pandemic of modern times. Deep-seated disparities in access to healthcare, high rates of poverty and cramped living conditions have combined to make the virus especially lethal for people of colour.

“You have people who are disenfranchised, with subpar access to healthcare and subpar finances, a population that is waiting to explode,” says Chad Ricks, a pastor and senior nurse who manages a state-run Covid-19 hospital in California. “Then you’ve got a disease that hits the black and brown community the worst. I think it’s compounded the situation. It’s a bad soup.”

A recent study by the APM Research Lab found that the mortality rate from coronavirus is 2.6 times higher than for white people. Almost 22,000 black people have died from the coronavirus in the US, accounting for about a quarter of overall deaths even while making up roughly 13 per cent of the population, according to APM. If black people had perished at the same rate as white Americans, about 13,000 would still be alive.

“None of what we’re seeing should come as a surprise,” says Valerie Wilson, an economist at the Economic Policy Institute, a think-tank which recently published a report on the impact of the virus on African-Americans. “If you’ve been alert and attentive to these inequalities over the generations, you can almost predict how any crisis is going to play out.”

Ms Tucker says she and her co-workers at the laundry are “very worried” about contracting coronavirus, adding that, before the outbreak, one employee caught a staph infection from a batch of dirty sheets. “They say we’re essential workers, but we’re not getting paid any extra for putting our lives on the line.”

A bus driver in Detroit, Michigan. The preponderance of black workers in such jobs is but one reason the African-American community has been hit so hard by the pandemic © Seth Herald/AFP/Getty

High levels of in-work hardship lead to lower rates of health insurance among those earning the minimum wage, who do not benefit from Medicaid, the publicly-funded healthcare programme for the very poor. This “coverage gap” is especially wide in some southern states such as Alabama and Mississippi, which refused to expand Medicaid when President Barack Obama passed his signature healthcare reforms in 2010.

According to an analysis of data from the American Community Survey, a continuing study conducted by the US Census Bureau, 12.3 per cent of black workers are uninsured versus 7.5 per cent of whites. “If you don’t have insurance, you’re more likely to delay seeking care until you get very sick,” says Ms Wilson, the EPI economist.

Catherine Flowers, founder of the Alabama-based Center for Rural Enterprise and Environmental Justice, says there is also a “deep mistrust of the public health system” in sections of the black community that has led some African-Americans to question the severity of coronavirus. “There was a lot of negative stuff put out on social media saying black people couldn’t get it,” she says.

Ms Flowers says the scepticism has its roots in the Tuskegee scandal, one of the worst examples of unethical medical research in history. For four decades, starting in 1932, federal public health officials and researchers at Tuskegee University conducted a study of 600 poor black men with syphilis. Even after the wide introduction of penicillin as a cure in the 1940s, hundreds of the participants were told that their illness was being treated when in fact they were receiving a placebo. The deception allowed researchers to study how the disease progressed if left unchecked.

By the time the whistle was blown, 128 participants had died from syphilis or related complications, while at least 40 spouses had been infected and 19 children contracted the disease at birth.

Health disparities have always existed in the US, but they have been compounded during the pandemic due to the disproportionate numbers of black people in front-line jobs. If a worker is classified as essential, they have few if any legal protections if they decide not to report for work.

“There is this duality where people are having to choose between two unfavourable outcomes: either you keep your job and expose yourself to the virus, or you don’t, and you lose your job,” says Ms Wilson. “What kind of choice is that to have to make? The option of not having a job is such a challenging and daunting prospect, especially if you don’t have a nest egg to fall back on. It’s a double-edged sword.”

A postal worker monitors packages in California. Some African-American campaigners say the high proportion of black people in insecure, low-paid jobs classed as ‘essential’ during the pandemic has its roots in centuries of injustice © Justin Sullivan/Getty

Some African-American campaigners say the high proportion of black people in insecure, low-paid jobs that have been classed as “essential” during coronavirus has its roots in centuries of injustice dating back to the time of slavery. “What we see in Alabama still is a mentality that stems from the plantations,” says Ms Flowers. “They want black people to work for next-to-nothing in so-called essential jobs.”

Jaribu Hill, executive director at the Mississippi Workers’ Center for Human Rights, describes these roles as “Jim Crow jobs”, a reference to the racist laws that enforced segregation in the south during the late 19th and early 20th centuries. “We are assigned to the dirtiest and the most dangerous jobs, and that was before Covid.”

Mr Ricks notes that one of the few qualifications available to people without a college education is a Certified Nursing Assistant diploma, which prepares people for careers in nursing homes. He says that many African-Americans with this qualification end up working in poorly-funded facilities, which were the first to crumple in the face of coronavirus. “They are in workplaces where people are getting sick by the thousands, and they are willing to go into the inner cities and underserved counties where no one else wants to work,” he says.

It is not just healthcare workers who run the risk of catching the coronavirus. Bessie Wallace contracted the illness while working as the manager of a low-income housing development in Coweta County, Georgia, where many of the residents are essential workers.

“Staying at home wasn’t an option,” says Ms Wallace, 50, who passed the virus on to her husband, a fork-lift truck driver. “It makes me feel like some white folks have an advantage,” she adds, noting that people in higher-paid jobs have been able to continue working from home. “We don’t have a choice.”

The fact that many African-Americans live in high-density housing developments might also explain why coronavirus has spread more quickly in areas where black people make up a high percentage of the population, according to Paulette Henriquez, the director of a health charity in the Bronx, the hardest-hit borough of New York City.

“These public housing developments are like Petri dishes because of their density,” she says. “There is no social distancing, the buildings are filthy, the elevators are broken.” Ms Henriquez says the problem is exacerbated by the fact that many of the residents live in multigenerational households where younger members are still working in front-line jobs. “You’ll have grandparents, parents and children all living in the same apartment. The youngsters are going out to work and bringing Covid back in, spreading it to the elders even if they’re staying at home.”

Care home workers hold a vigil in Brooklyn, New York. One of the few qualifications available to people without a college education is a Certified Nursing Assistant diploma, which prepares people for careers in nursing homes © Stephanie Keith/Getty

In addition to suffering from higher death rates, there are early signs that black people will also bear the brunt of the economic fallout from coronavirus. Last week’s US jobs numbers, which were much better than expected, reported falling unemployment rates for every racial group except African-Americans, which experienced another rise in joblessness. An FT-Peterson poll published last week found that far more African-Americans had seen a reduction in family income as a result of the virus compared with white people.

In a television interview last week to address Floyd’s killing, Kenneth Frazier, the chief executive of Merck, called on businesses in the US to do more to close the “opportunity gap” between black and white Americans. Many African-Americans do end up in positions of power like Mr Frazier, whose father was a caretaker and whose grandfather was born into slavery. But Mr Frazier said there were still far too many “inequities and disparities” in employment, housing, healthcare and the criminal justice system. “What business can do, whether you want to call it reparations or not, is step up to address in today’s world the continuing results of years and years of racial prejudice in this country.”

Abigail Taylor, who lives in the apartment building managed by Ms Wallace, says she has lived from “pay cheque to pay cheque” her whole life. In early March, she was furloughed from her job at a plastics moulding factory in Troup County, Georgia, which pays her $12 an hour to work on a production line that makes mudflaps for dirt-bikes and oil tanks for jetskis.

A delivery driver unloads boxes in Washington. If a worker is classified as essential, they have few if any legal protections if they decide not to report for work © Drew Angerer/Getty

An administrative error in the factory’s human resources department meant she went for six weeks without receiving unemployment benefits or the $600-a-week booster payment funded by the federal stimulus package. “We were barely holding on. We were hungry and we didn’t have any gas for the car,” says Ms Taylor, who has an 11-year-old daughter. “Miss Bessie was a big help. She helped us with groceries and gave us a couple of rolls of toilet paper.”

Eventually, Ms Taylor had to raid her defined contribution pension scheme, known as a 401(k). During her five years at the factory, she had managed to save $2,000 towards her retirement but ended up withdrawing $1,500 of that to tide her over for the period when she had no income.

Now she worries that she will lose her job permanently because the factory has started laying off workers following a fall in demand for its products. “I suppose I will have to find another job,” she says. “I’m just going to keep on hoping things get better.”

* Some names have been changed to protect identities