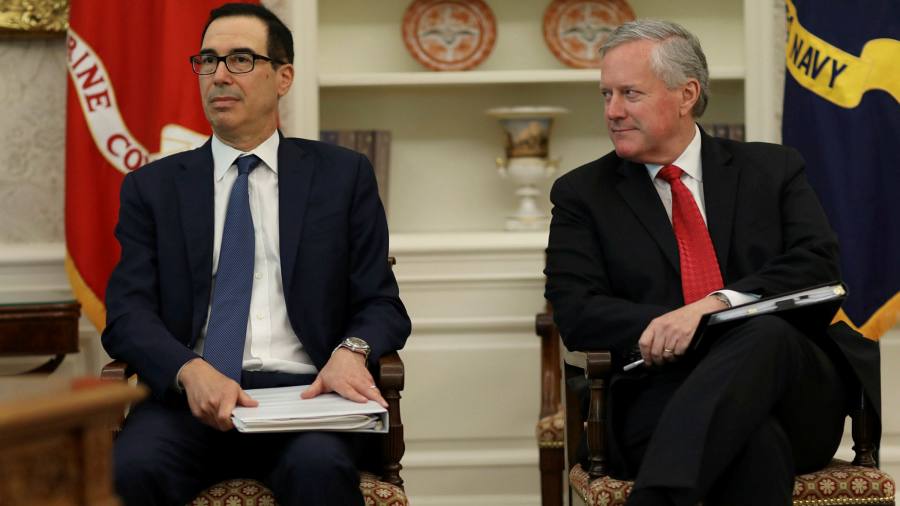 The Trump administration has signalled it will hold firm on its position that enhanced unemployment benefits should not continue at their current levels in the next coronavirus relief package.

President Donald Trump and Steven Mnuchin, US Treasury secretary, met with Republican congressional leaders Mitch McConnell and Kevin McCarthy at the White House on Monday to discuss the contours of Republicans’ stimulus proposal, as Congress prepares a new relief package.

Speaking in the Oval Office, Mr Mnuchin indicated the administration did not want to see enhanced unemployment benefits continue at their current level of $600 a week, and would open negotiations for $1tn in supplemental aid. The House of Representatives has passed Democratic-sponsored legislation that would provide an additional $3tn in aid, but the Republican-controlled Senate has refused to consider it.

“We don’t think any federal money should be spent” to create “a disincentive to work”, he said.

Congress has returned to Washington from a two-week recess for negotiations over the next stimulus package, which both parties say they want to see passed before the end of the month, when current benefits expire.

One of the sticking points is the question of enhanced unemployment benefits, which have put the additional $600 a week in the pockets of unemployed Americans, on top of benefits from their states, since the $2tn Cares Act was passed in March.

Democrats have said they would like to see those enhanced unemployment benefits continue, arguing they have played a critical role in helping Americans service their debts and put food on the table while the unemployment rate remains in the double-digits.

Republicans have countered that the enhanced unemployment benefits have dissuaded some Americans from returning to work, pointing out that in some cases recipients are earning more on unemployment than they would at their jobs.

Mr McConnell said Republicans also planned to focus on the issue of liability for schools and businesses stemming from reopening. “We don’t need an epidemic of lawsuits,” he said on Monday.

Mr Trump has also repeatedly raised the issue of a payroll tax cut, an idea that has not gained traction in Congress but will probably become a central point of the debate given Mr Trump’s focus.

Mr Trump said on Monday a payroll tax cut would be “a tremendous saving and an incentive for companies to hire their workers back and to keep their workers.”