Warner Music owner Len Blavatnik has cashed in part of his investment in the music industry with the $1.9bn sale of shares on Wednesday, in the biggest US initial public offering of the year.

After delaying pricing its flotation to show solidarity with the Black Lives Matter movement, the company that represents artists including Cardi B and Meek Mill sold 77m shares at $25 a share, valuing the group at $12.8bn.

The listing breaks a lull in big deals this year that has dragged the sum raised in US flotations to two-thirds below the amount raised for the same period last year, according to Refinitiv data.

The Warner Music sale priced towards the higher end of the range announced last week and was upsized by 10 per cent, an indication of strong investor demand.

The proceeds will not go to Warner itself but to the investment vehicle of the Ukrainian-born Mr Blavatnik, a citizen of the UK and the US who bought Warner Music for $3.3bn in 2011, when the music industry was in the doldrums and Spotify had yet to catch on widely in the US.

The sale represents the biggest test for the music business since Spotify’s listing two years ago and will be closely watched as a barometer for how far the industry has come from the dark days of piracy.

Warner had initially filed to list in February but when the pandemic began to grip the US and Europe the company put the plan on ice. However, in the ensuing weeks, the company’s executives saw that demand for streaming entertainment was rising as people were stuck at home.

Shares in Spotify, the music streaming group, were resilient even as the broader market plunged. Dua Lipa, a Warner artist, released an acclaimed album in March that went on to top the charts in the UK, bringing a boost of confidence. 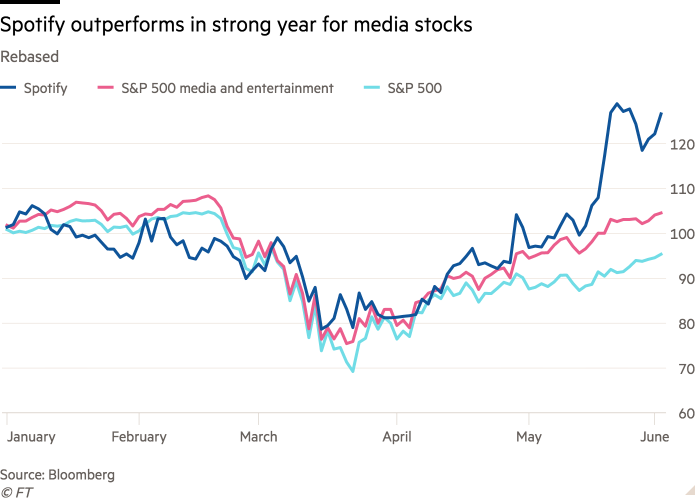 The business has enjoyed a renaissance as global recorded music revenues grew for five years in a row, reaching $20bn in 2019, according to the IFPI, the trade group. Institutional investors have taken note: Universal Music was recently valued at €30bn, or 27 times its 2019 ebitda, by a Tencent-led consortium.

As Mr Blavatnik sought to cash in on the soaring value of music companies, the magnate evaluated options with his team at Access Industries, his sprawling conglomerate that controls Warner Music. It ultimately decided that an IPO was the best avenue as it would allow Mr Blavatnik to take on outside investors without ceding control, said one person close to the situation. Access will still control Warner through supervoting shares.

On Wednesday, the company also announced a $100m fund to support “charitable causes related to the music industry, social justice and campaigns against violence and racism,” supported by Mr Blavatnik’s family foundation.

Warner Music made adjusted net income of about $300m on $4.5bn in revenues in fiscal 2019. The company had punched above its weight during the streaming boom, helped by a bet on US hip-hop acts, said Mark Mulligan, analyst at Midia Research. “Their [artist and repertoire] strategy has been appreciated as being really strong, making a big bet on US hip hop earlier than the competition,” said Mr Mulligan.

The IPO comes during a rapid stock market rally that has added more than a third of value to US stocks, in a run that equity bankers expect will encourage more companies to list. ZoomInfo, a tech group focused on marketing, is set to raise up to $890m when it lists on Thursday after increasing the original price range of the listing earlier this week.