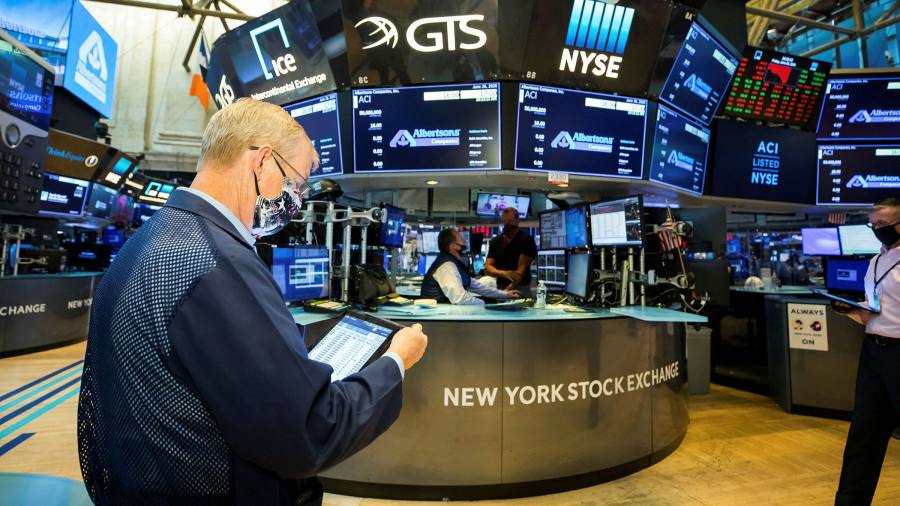 US stocks dropped on Friday after Texas and Florida rolled back state reopening measures, raising fresh fears that the coronavirus would derail an economic recovery. Bank stocks were among Wall Street’s sharpest fallers after the US Federal Reserve ordered them to preserve capital.

The S&P 500 had dropped 1.6 per cent by lunchtime in New York while the Dow Jones Industrial Average fell 1.8 per cent.

European markets slipped back in tandem with Wall Street, erasing most of their intraday gains. The Euro Stoxx 50 closed 0.5 per cent lower, Germany’s Dax fell 0.7 per cent and the FTSE 100 ended the day little changed, having earlier been up as much as 1.8 per cent.

The Fed said on Thursday it would cap share buybacks and dividends by America’s biggest banks after stress tests showed Covid-19 could trigger $700bn of loan losses and push some lenders close to their capital minimums.

Shares in JPMorgan Chase, Bank of America, Wells Fargo and Citigroup fell between 5 and 7 per cent in response. The price moves reversed gains on Thursday that were prompted by a decision by regulators to relax certain pre-financial crisis rules.

“The Fed created more uncertainty which will probably leave investors frustrated,” said DA Davidson analyst David Konrad. “We believe the group will be able to maintain their dividend in the third quarter, which we believe would have driven a positive response from investors. However, the continued uncertainty from the undisclosed Covid stress test coupled with the requirement for banks to resubmit capital plans later in the year added unexpected uncertainty that will weigh on bank multiples. Moreover, the implication that banks need to earn their dividend could put a few banks’ dividends at risk going forward.”

Investors remained focused on pandemic statistics, with Texas, Florida and California reporting 5,000 new coronavirus infections on Thursday. Texas Governor Greg Abbott said on Friday that a spike in new coronavirus cases meant bars had to close and restrictions would be put on outdoor gatherings. Florida stopped bars from selling alcohol.

“Equities will surely remain under pressure so long as the worrying resurgence in new coronavirus cases in the US continues unchecked,” analysts at Capital Economics said in a note. “But if outbreaks can be controlled across the world’s largest economies without reinstating tough nationwide lockdowns, we think that equities will comfortably outperform again.”

BofA analysts concurred. “The more the US virus numbers deteriorate, the more the market will probably doubt the sustainability of the recovery,” they said in a note.

Still, a slower case count in many European countries has lifted hopes for a recovery, BofA said, as it expects confidence to improve in the eurozone over the next few weeks.

“While higher US virus numbers could weigh on market sentiment, it would be highly unusual for asset prices not to respond to such a strong improvement in macro momentum,” they added. BofA forecasts “are consistent with a further 15 per cent upside for the Stoxx 600 . . . by November”. The bank’s analysts forecast outperformance, for example, in the banking, energy and mining industries.

Wall Street sentiment has been bolstered in recent weeks by the expectation of further stimulus if reimposed lockdowns or changes in consumer behaviour due to fresh outbreaks knock the nascent economic recovery off course.

“The market is being supported by hope — hope of more stimulus both from the US government and, if required, from the Federal Reserve,” said Derek Halpenny, an analyst at MUFG.

Christine Lagarde, the European Central Bank president, was also in the mix on Friday, saying the eurozone was “probably past the lowest point of crisis”.

She added the caveat that the economic recovery from the pandemic hit would be “restrained” as households save instead of spending. Furthermore, some airlines and hotels would suffer “irredeemable” damage, warned Ms Lagarde.

In the Asia-Pacific region, Japan’s Topix had closed higher by 1 per cent, with the Australian ASX/200 gauge up 1.5 per cent. South Korea’s Kospi rose 1.1 per cent.

Oil prices followed equities lower, with Brent crude, the international benchmark, down 0.9 per cent to $40.70 a barrel, while West Texas Intermediate, the US marker, fell 1.5 per cent to $38.13.