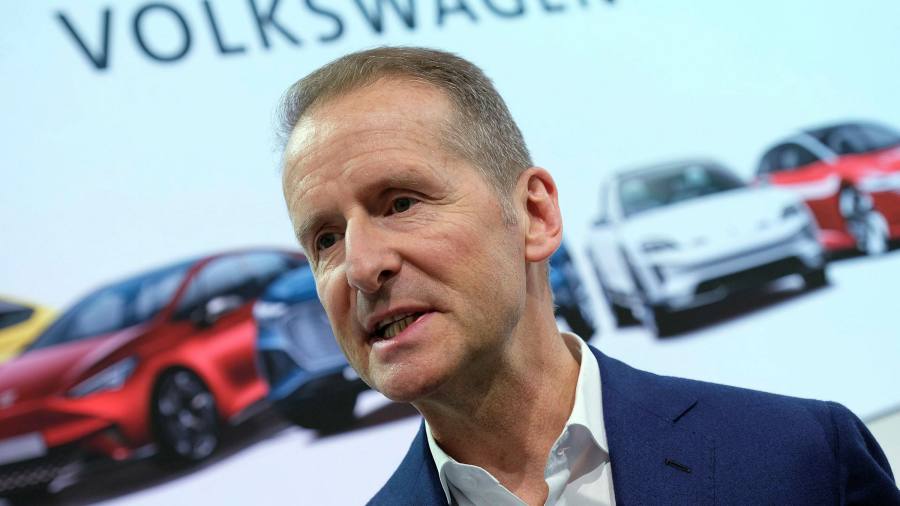 Volkswagen chief executive Herbert Diess apologised to the carmaker’s supervisory board on Monday for accusing its members of being responsible for damaging leaks, just hours before leaving his position at the helm of VW’s core brand.

The German group announced a series of sudden management changes late on Monday, after workers’ representatives criticised executives for technical problems that delayed deliveries of the new Golf 8 model, and hampered the production of VW’s flagship electric vehicle, the ID.3.

The Wolfsburg-based company said Ralf Brandstätter, previously chief operating officer at Volkswagen brand, would take over from Mr Diess at the marque, while group procurement executive Stefan Sommer would leave at the end of the month.

Last week, Mr Diess told thousands of managers that confidential information about the group’s software failings had leaked from the supervisory board, which includes members of the works council, as well as representatives of shareholders Porsche SE and the state of Lower Saxony.

The accusation angered several supervisory board members, and at a meeting on Monday, the 61-year-old apologised in person and in writing, according to a person familiar with the matter.

German corporations are run via a two-tier board system, with the management board, made up of executives including the chief executive, reporting to a supervisory board including a chairman and representatives of workers and shareholders.

Mr Diess, who moved from BMW to become head of the VW brand in 2015, was made chief executive of the entire VW group in 2018, but continued to occupy both roles. The VW brand is by far the largest of the group’s 12 marques, accounting for €88bn in revenues last year.

In a statement on Monday, VW said the move would give Mr Diess “greater leeway for his tasks as group CEO”.

“The objective will be a stronger focus on the tasks at the top level of the group and the brand in the current transformation phase of the automotive industry,” it added.

Mr Brandstätter, a VW veteran born just a few miles away from its headquarters, said the VW brand was “developing into one of the leading providers of carbon-neutral mobility and is on the way to becoming a digital technology company”.

However, Prof Ferdinand Dudenhöffer, the director of the Center Automotive Research in Duisburg, warned that VW was facing a “self-inflicted leadership crisis at an extremely challenging time”, when the shift to electric vehicles and the effects of the coronavirus pandemic were already weighing on the group.

“The organisational structure of VW, the world’s largest car manufacturer, is unbalanced,” he said, pointing to the strength of the unions and large stakeholders.

Mr Sommer, who helped VW secure battery supply for its electric vehicle ambitions, will leave at the end of this month.

In a statement, the group said Mr Sommer, who had previously led the large car supplier ZF, was “leaving the company at his own request by amicable and mutual agreement”.

Later on Tuesday, VW’s executive board will discuss the initial findings of an internal investigation into the publication of an Instagram advertisement that the company admitted was racist for its depiction of a dark-skinned man being manipulated by a large white hand.