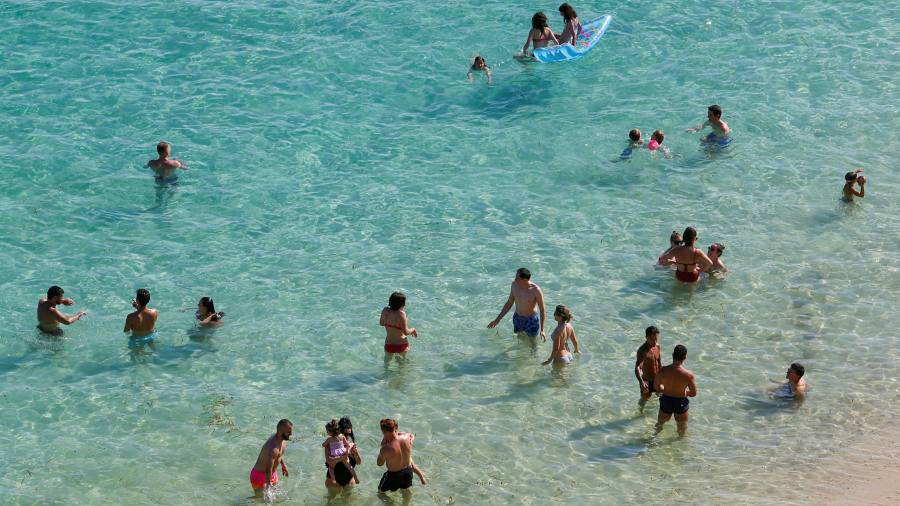 Calls are growing for people to take vitamin D supplements to reduce the risk of contracting Covid-19, as some research suggests they could be especially beneficial to those with darker skin.

This week people in the UK were urged to make sure they were consuming enough vitamin D by three influential organisations, including the government’s Scientific Advisory Commission on Nutrition.

But even advocates of the “sunshine vitamin” — so called because the body makes it in the skin through exposure to sunlight — say more evidence is needed to prove definitively that it cuts the risk of coronavirus infection and severity of symptoms.

Vitamin D, a steroid hormone, is essential for maintaining a healthy immune system. In mid-latitude countries such as the UK, people with pale skin can make enough of it during summer by exposing bare arms or legs to sunlight for a few minutes a day.

The process takes longer in those with heavily pigmented skin that blocks more UltraViolet radiation from the sun. In winter all our vitamin D has to come from foods, such as oily fish, egg yolks and mushrooms, or pills.

Other reports promoting vitamin D came from the National Institute for Health and Care Excellence and the Royal Society, Britain’s senior scientific body. The latter urged the government to strengthen its public health advice for the public to take daily vitamin D supplements while more research takes place.

Charles Bangham, professor of immunology at Imperial College London and co-author of the Royal Society paper, said: “I started from quite a sceptical position, doubting whether vitamin D was going to play an important role in Covid-19, but I am now convinced that there is strong evidence that people who are deficient in vitamin D are more susceptible to acute respiratory tract infections.”

He added: “It is possible that higher rates of vitamin D deficiency could be one reason why people with darker skin are affected more seriously by the disease, but there are a lot of other factors as well so we need to collect this data.”

Vitamin D has long been recognised as essential for bone and muscle health, but other benefits such as warding off infections and cancer are controversial.

The government’s advisory commission on nutrition and the National Institute for Health and Care Excellence reviewed evidence from clinical studies to see whether taking vitamin D supplements reduced the risk of acute respiratory tract infections in general or Covid-19 in particular.

Both concluded that research results so far were insufficient to give a clear answer. But Alison Tedstone, chief nutritionist at Public Health England which commissioned both reviews, said: “With many people spending more time indoors, particularly the more vulnerable groups and those ‘shielding’, there is a risk that some people may not be getting all the vitamin D they need from sunlight. It’s important they consider taking a daily 10 micrograms vitamin D supplement.”

Naveed Sattar, professor of medicine at Glasgow University, remains sceptical, after leading a study of 340,000 UK Biobank participants, of whom 650 were hospitalised with Covid-19 and 200 died from the disease. After adjusting for other variables the researchers found no association between Covid-19 and vitamin D levels in blood.

“Many want to believe Vitamin D works but we all have to be fully objective and look at the best evidence,” said Prof Sattar. “You can argue biological plausibility for anything but only a well-controlled randomised clinical trial of vitamin D will tell us the answer.”

Adrian Martineau, professor of respiratory infection and immunity at Queen Mary University of London, aims to provide more evidence. His team pooled data from 25 clinical studies in 2017 and found a modest protective effect of vitamin D against respiratory infections, which was stronger in people with low levels of the vitamin in their blood.

Prof Martineau is expanding that meta-analysis to take in data from 14 more trials while aiming to provide new evidence through Covidence UK, a national study examining risk factors for Covid-19 with a particular focus on vitamin D.

Sue Lanham-New, head of nutritional sciences at the University of Surrey, led a study that dismissed the effectiveness of very high doses of vitamin D — above 100 micrograms or 10 times the recommended UK daily intake — for preventing coronavirus infection or treating disease.

“Although these excessive doses do not reduce the risk of contracting Covid-19, it is very important that people have enough vitamin D — and many people from Afro-Caribbean and Asian backgrounds have too little,” said Professor Lanham-New. “Amid all the misinformation and confusion about vitamin D, the most important message is that people must avoid deficiency.”