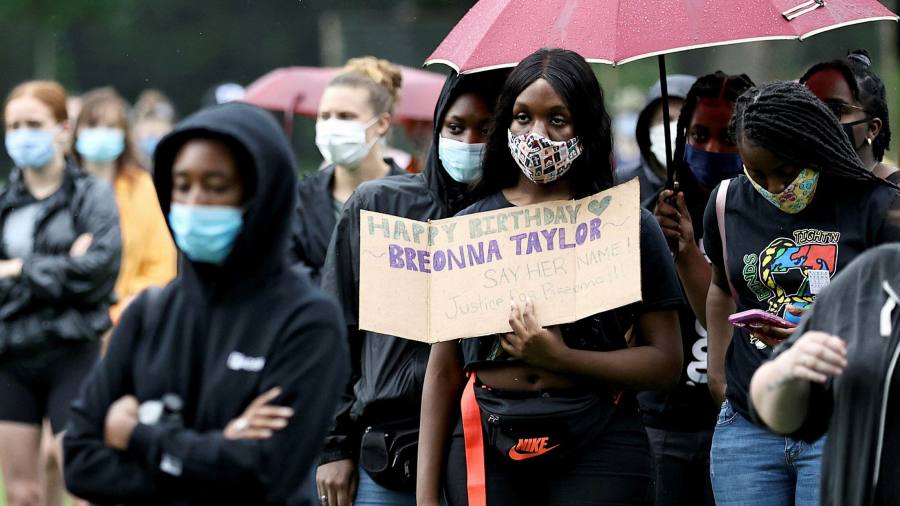 Breonna Taylor was asleep in her own bed when plain-clothed police forced their way into her Kentucky home with a battering ram. A Louisville judge had issued a no-knock warrant in an ongoing drug investigation and one of the suspects was linked to her address. The man was already in custody when the three officers broke down her door on March 13. Her boyfriend fired a round at the men he says he had mistaken for intruders. He survived but she was killed. The officers shot her at least eight times.

Three weeks into a global wave of Black Lives Matters protests, posters that once heralded the memory of George Floyd are now plastered with Taylor’s name. Public pressure is mounting for an ongoing FBI probe to bring criminal charges against the officers who shot her.

As demonstrations and calls for justice shake the world, both cases of police brutality leave much to untangle. While the taped killing of Floyd exposes the savagery of systemic racism, the delayed response to Taylor’s case reveals its gendered twist.

The outrage at the lack of accountability is widely shared by activists. In late 2014, the Say Her Name campaign was launched to highlight the erasure of female experiences of police violence against the African-American community. Its report the following year revealed a sad truth. Even in commemorating the lives of black women who were killed in, or died after, encounters with the police, the scarcity of information was telling. Their stories had neither captured public interest nor warranted a criminal investigation thorough enough to fill in the gaps.

Like Taylor, many black women are collateral damage in police action against black men

Like Taylor, many black women are collateral damage in police action against black men, even when they are looking for protection. Meagan Hockaday, Janisha Fonville, Aura Rosser and Yvette Smith were shot and killed in 2014 and 2015 by police responding to calls about domestic disturbances.

Five years on, little has changed. While black women work to propel the civil rights movement forward in the US and beyond, their struggle is largely invisible. Despite their clear vulnerability to both racism and sexism, there is little to no new government research exploring their plight. A US Department of Justice report using census data from 2005 to 2010, showed higher rates of rape for black women and girls over the age of 12 than for white and Latina women and girls. Social scientists argue that black women’s exposure to sexual violence is both disproportionate and wildly under-reported.

In 2015, the metropolitan police department in the District of Columbia was forced to acknowledge they had wrongfully arrested an 11-year-old black girl seven years before when she came to report she had been raped by two men. Even though she showed signs of sexual trauma, the police charged her with filing a false report.

The invisibility of black women and girls is not just a US problem. In the UK, protests are calling for justice in the dimly lit case of Shukri Abdi, a 12-year-old Somali refugee who mysteriously drowned in a river last summer while playing with classmates. The four-month inquest into her death was recently adjourned with no confirmed resumption date or commitment to examine allegations of extensive bullying she faced at school.

Everyday this week, I have woken up to news of violence against black women. The experience of black womanhood is steeped in collective and individual trauma. A history of violence, haunted by spectres of chattel slavery, colonialism and exploitation, is continually dismissed as a byproduct of mainstream state brutality, while our pain is questioned and our need for protection persistently ignored.

With the focus now on systemic violence against the black community and stories such as Taylor’s bleeding into calls for change, the depth of racist and sexist discrimination faced by black women is becoming more difficult to ignore. An acute struggle is slowly moving from the periphery of the civil rights movement and settling firmly at its heart.

The writer is a Sudanese-British journalist based in London