Stephan Dolezalek recently sat in his house in San Francisco watching a video feed from a camera mounted on a hard hat.

The executive director of the agritech investment firm Wheatsheaf was getting an hour-long tour of a facility as he did his due diligence on a promising start-up.

From Zoom team meetings to video site visits, some of the venture capitalists who are still doing deals during the coronavirus pandemic say that many of these practices have made their jobs more efficient and are here to stay.

“The question we never really asked ourselves in the past was: ‘If I do this by video rather than getting on a six-hour plane flight, how much money and time do I save and what do I get less of than I would have gotten in person?’” said Mr Dolezalek. “In 12 to 24 months from now, and at least some of the time, the answer will be ‘Video is fine’,” he added.

In Beijing, Philip Beck, an angel investor and fundraiser, said that while the official lockdown has ended, most people still prefer video meetings using Zoom or DingTalk, another video app, to face-to-face meetings.

Due diligence has sped up by about 25 per cent, he added. In the past, investors typically spent about two weeks with a start-up to understand its business. But now people “are probably saying no more quickly”, he said.

That also reflects increasing caution around new investments in the current climate.

While first-quarter VC investments were steady at €8.2bn in Europe and $34.2bn in the US, Nalin Patel, an analyst at data provider PitchBook, said he expected dealmaking “to slow considerably in the next two quarters” and that VC firms were focusing on investing in their existing portfolio companies rather than searching for new start-ups.

Many VCs said face-to-face meetings remain important. Niccolo Manzoni at Paris-based Five Seasons Ventures said: “We are not going to invest in a company without meeting the team directly. The deals we are closing are conversations which started [earlier].”

Duan Lanchun, an investor at Cathay Capital in Shanghai, said her team had restarted office visits at start-ups while wearing face masks and taking along lots of hand sanitiser.

“Investing takes trust, so if you don’t go meet someone in person it’s hard to get a sense of them,” said Ms Duan, adding they had made frequent visits and even stayed two or three days before finalising an investment.

Some investors said they were holding meetings in parks and other open spaces where they could have private conversations while social distancing.

But other VCs said that digital due diligence could provide a level playing field for entrepreneurs who are not located near a tech cluster or a big city where financiers congregate. 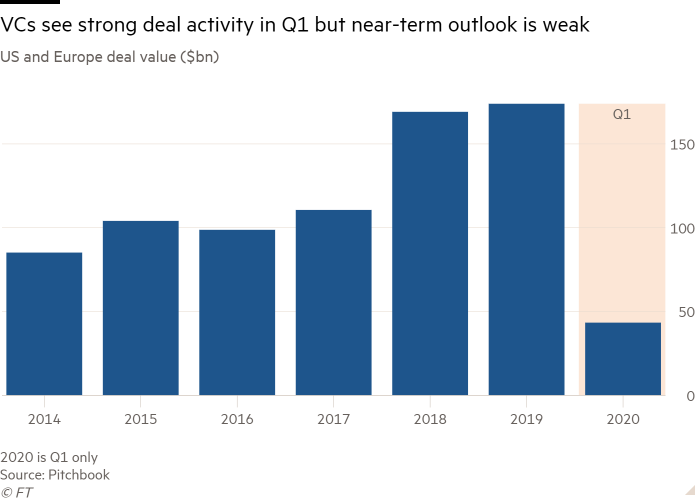 Steve Case, the former chairman of AOL who chairs VC fund Revolution based in Washington DC, said the pandemic and the new due diligence methods would prompt investors to look beyond the big hubs such as New York, Silicon Valley and Boston.

Revolution has a seed fund called Rise of the Rest that focuses on start-ups in emerging hubs. “[People] can be in Ohio, Pennsylvania, Virginia, Illinois, Indiana, Texas and Florida. It shouldn’t matter whether you’re three blocks away, three miles or 3,000 miles away.” he said.

“Covid-19 is the best thing in the long run for entrepreneurs and start-ups. Silicon Valley has, in the way it’s structured, a typically 90-mile radius from the Bay area,” said Rob Leclerc of AgFunder, an online funding platform. “[VCs] are now forced to do virtual DDs. This expands the global footprint [and] creates opportunities for investing all over the world,” he added.

Mr Dolezalek said that while he missed opportunities such as driving over to a start-up’s car park in the evening to see who was still in the office and to check how hard they worked, he welcomed videoconferencing with people who were usually at home.

Wheatsheaf has just completed an investment done entirely through digital due diligence during the lockdown. Using their local contacts including business executives and fellow VCs they trust, they recently invested in a Dublin-based start-up.

He doubted digital platforms could completely replace face-to-face networking but said they could help new entrepreneurs and start-ups who were located away from the VC hubs. He said: “Can remote companies and investors close the gap in playing fields? Probably yes, particularly if they get really good at leveraging these new communication tools.”