Venezuela’s president Nicolás Maduro said that two former US soldiers were in custody after trying to come ashore in a motor boat in an alleged plot to assassinate him.

In a televised address on Monday night, Mr Maduro showed what he said were the passports and identity cards of the two men, Airan Berry and Luke Denman. He described them as “members of Donald Trump’s security”.

He said the pair were captured in a boat in the sea west of Caracas along with six other “terrorists”. Venezuelan state television showed images of the boat and then several men, face down on dry land with their hands tied behind their backs.

Mr Maduro said another five men had been detained elsewhere as part of the same operation.

“Who were they fighting for? For Donald Trump. It’s that simple,” he said.

US president Donald Trump told reporters on Tuesday that the incident “has nothing to do with our government”.

The detentions come a day after the government said security forces killed eight “terrorist mercenaries” and arrested two more as they tried to steal ashore before dawn. The Venezuelan government said one of the detainees worked for the US Drug Enforcement Administration. The DEA said it had “no involvement in this weekend’s events”.

On Sunday night, a former US Army special forces officer, Jordan Goudreau, and a former Venezuelan National Guard captain, Javier Nieto, claimed responsibility for the incursion, saying it was part of a wider plan to topple the Maduro government.

In a video posted on social media, Mr Goudreau said his men had conducted “a daring amphibious raid” and penetrated “deep into the heart of Caracas”. There were no apparent signs of uprising in the Venezuelan capital.

The incursions come at a time of heightened tension between the US and Venezuela, as the Trump administration intensifies efforts to force Mr Maduro to step down. The US and a number of other countries recognise opposition leader Juan Guaidó as the country’s legitimate interim president and have called on Mr Maduro to step down.

The US state department did not immediately return a request for comment. 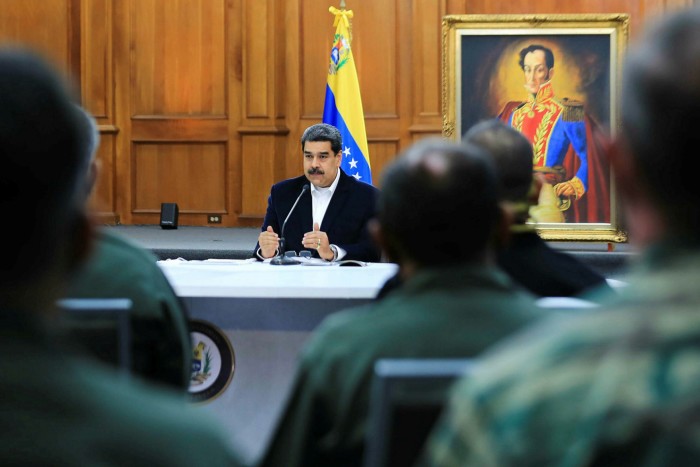 Speaking to Reuters, Mr Goudreau acknowledged that Mr Berry and Mr Denman worked for him. “Those are my guys,” he said. Mr Goudreau, who served in Iraq and Afghanistan, is the director of Silvercorp USA, a private security company based in Florida.

Venezuelan state television showed photos of what it said were the two Americans. It showed footage of a number of detainees standing on a seafront, flanked by black-clad security officers, and an image of a bare-chested man being pulled from a helicopter by men wearing black balaclavas and military uniform.

Mr Maduro said his security forces had confiscated weapons, ammunition, US helmets, dollar bills and cocaine from the suspects. He said he had deployed 25,000 troops to the coast in response and that there might be further arrests.

The incidents come a month after a former Venezuelan general based in Colombia claimed he was planning “a military operation against the Maduro dictatorship” from camps on the Guajira peninsula, which Colombia and Venezuela share. He said US contractors and Colombian politicians were involved. The US government denied any involvement.

In March, the US Department of Justice charged Mr Maduro and a dozen associates in connection with “narco-terrorism” and other crimes, offering $15m for information leading to the president’s arrest.

Last month, the US sent warships close to the Venezuelan coast to stop what Mr Trump described as “cartels, criminals, terrorists and other malign actors” exploiting the coronavirus pandemic to smuggle drugs to the US.

As Monday’s events unfolded, the Venezuelan opposition led by Mr Guaidó backpedalled from its initial claim on Sunday that the incursion was a government fabrication to deflect attention away from internal problems.

In a statement, Mr Guaidó recognised it had happened and urged the government to respect the human rights of those involved. He also denied the opposition had any ties to Mr Goudreau and his security company.