Yields on long-dated US Treasuries climbed to the highest levels since March on Thursday as hedge funds and other investors crowded into a trade that will pay off if the yield curve continues to steepen.

Investors were buying shorter-term Treasuries on the expectation that the Federal Reserve would continue to pin interest rates near current low levels, while shorting 10- or 30-year bonds, traders and strategists said.

The intensification of the three-day sell-off in the longer-dated bonds pushed one part of the yield curve to its steepest level since late 2016, ahead of an update from policymakers at the Fed next week and more sales of new government debt to fund the federal stimulus.

The difference in yields between 5-year and 30-year Treasuries rose to 122 basis points, the most since December 2016.

“At this point I have a hard time thinking about who isn’t doing it,” Jon Hill, US rates strategist at BMO Capital Markets, said about the investor strategy. “It is becoming a very crowded trade. A lot of people see this as intuitive given [Treasury] supply, the pull back in demand and the flows.” 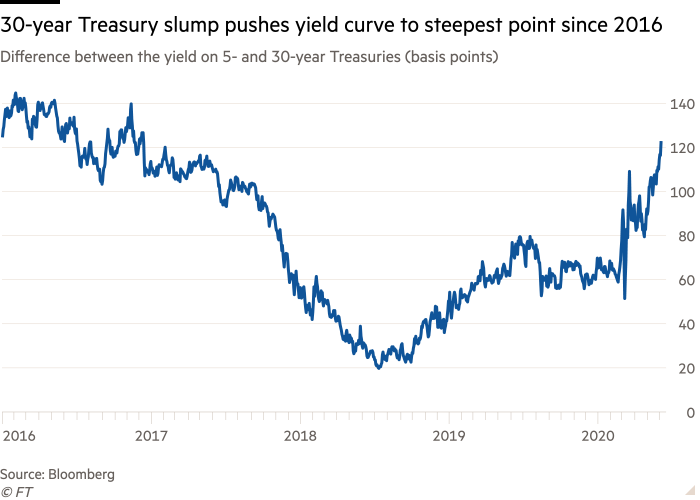 Traders were closely watching Treasury futures markets, where there had been elevated levels of activity in recent days. That signalled that funds using trend-following trading algorithms — known as commodity trading advisers — were selling out of long-dated Treasury positions, strategists said.

Markets are also digesting a record spurt of debt issuance, including a move by the US Treasury department to shift a greater portion of its borrowing to longer-dated bonds, at the same time as the Fed has been reducing its emergency purchases of Treasuries.

“The Fed has been slipping the ‘training wheels’ off the Treasury market,” said Citigroup rates strategist Bill O’Donnell. “All eyes will be on next week’s Fed meeting and whether the Fed accepts these higher rates or deems it necessary to dial up the balance sheet further to support bond prices and keep borrowing rates contained.”

Although data on Friday are expected to show the US unemployment rate surging above 19 per cent, investors have taken heart that some indicators are signalling that economic conditions are stabilising.

BMO’s Mr Hill said that was also contributing to the reduced demand for longer-dated Treasuries, including the 10- and 30-year.