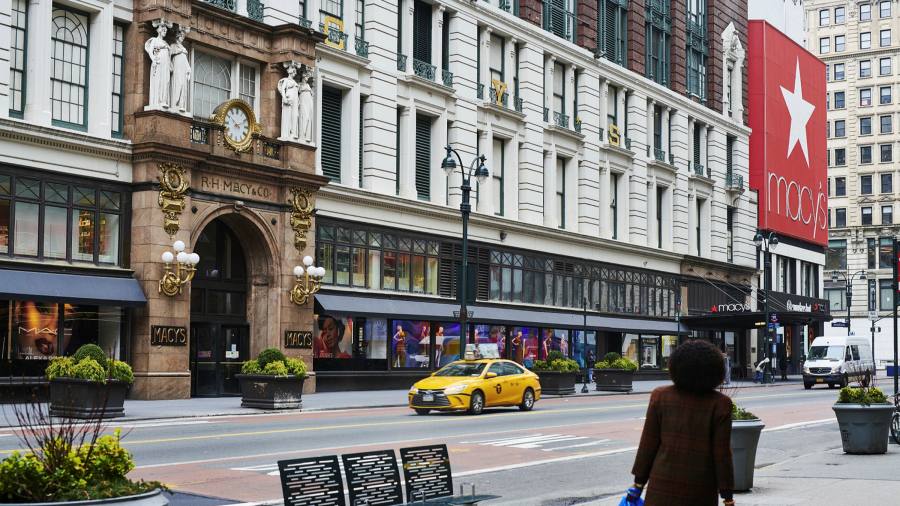 Shopping malls and clothing stores are hoping to woo back Americans emerging from lockdown with some of the heaviest discounts in years on a wide range of fashion lines.

Macy’s, Ross Stores and TJ Maxx owner TJX have within the past week disclosed writedowns on the value of their merchandise running into hundreds of millions of dollars as they turn to promotions to shed unsold stock.

“A lot of the apparel is out of date as it has been sitting in stores at least since the Covid-19 outbreak,” said industry consultant Jan Rogers Kniffen, adding that reductions being offered were the heaviest he had experienced in five decades. He expected the discounts to last until August at least.

Among the many promotions, Gap is offering reductions of 50 per cent, Levi Strauss up to 50 per cent and American Eagle up to 60 per cent.

Almost two-thirds of products being sold by US department stores online are being offered at a discount and clothing accounts for most of the goods on sale, according to data providers StyleSage and Refinitiv.

Not all items are being reduced, because some products have sold well during the pandemic. Athleisure, in particular, is in more demand as people choose comfortable clothing while they work from home. Yogawear company Lululemon is not offering discounts.

However, financial updates from several retailers in recent days have shown how inventory levels have risen during the crisis, with coats and other seasonal wear expected to be particularly difficult for groups to shift.

Inventory writedowns are another sign of the pain the shutdown is inflicting on discretionary retail. Companies including JCPenney, Neiman Marcus and J Crew have been unable to cope with a collapse in sales and filed for bankruptcy. Revenues should pick up as stores reopen, but discounts will put profit margins under pressure.

Macy’s said it would take a $300m writedown on the value of its stock and Paula Price, the department store chain’s outgoing chief financial officer, told investors she expected “significant markdowns” in the current quarter.

Ross Stores took an “inventory valuation charge” of $313m, which chief executive Barbara Rentler said was because the company expected to sell items “below our original cost”. TJX has also written down its inventory by about $500m. Some of the merchandise was already in markdown and “was expected to be reduced further”, the company said.

However, reductions were not as large as they might be, in part because retailers whose stores had been forced to close had ordered less stock, said Simeon Siegel, analyst at BMO Capital Markets.

“Certain products are being heavily discounted, but we’re also finding there’s an appetite to purchase products at full price — those that cater to the new normal,” he added. “Overall, I’d characterise the environment as mixed.”

Investors will learn more this week about how the US clothing sector is coping with the crisis, with earnings reports scheduled from companies including Abercrombie & Fitch, Burlington and Ralph Lauren.