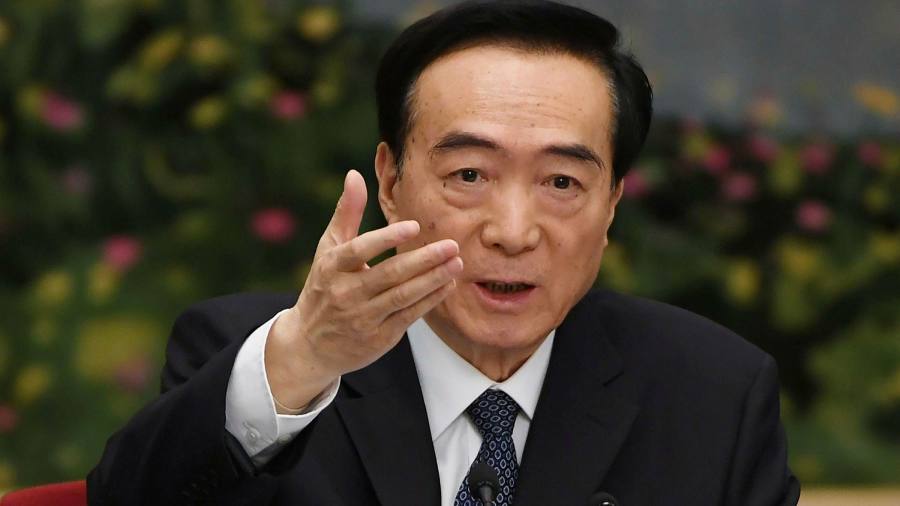 The Trump administration has sanctioned several top Chinese Communist party officials over their involvement in the detention of more than 1m Muslim Uighurs in re-education camps in Xinjiang province.

The US Treasury sanctioned three current officials and a former cadre, in addition to designating the Xinjiang public security bureau. The Department of State said three of the officials would be barred from entering the US.

“The US is committed to using the full breadth of its financial powers to hold human rights abusers accountable in Xinjiang and across the world,” Steven Mnuchin, Treasury secretary, said in announcing the move.

The sanctions mark the latest escalation in the Trump administration’s push to punish China over everything from human rights abuses in Xinjiang to the recent imposition of a draconian security law in Hong Kong.

Treasury said the Chinese officials included Chen Quanguo, the Communist party secretary of Xinjiang, and Zhu Hailun, who helps oversee policy in the province. The sanctions also target Wang Mingshan, head of the Xinjiang public security bureau, and Huo Liujun, a former head of the bureau.

Naming the officials comes after the state department in recent weeks said it was imposing visa restrictions on officials, and potentially their family members, although it did not disclose the names of any of the targeted cadres.

Mike Pompeo, secretary of state, said Washington was responding to the “horrific and systematic abuses in Xinjiang” and urged other countries to join the US in condemning the Chinese government’s approach to the region.

Daniel Tannebaum, a former Treasury official, said the move was meaningful in the sense that the US administration was highlighting perceived significant human rights abuses. But he said Washington would require more than unilateral sanctions to have a chance of getting China to reverse course.

Relations between the US and China have been worsening to levels not seen in decades. Wang Yi, China’s foreign minister, on Thursday said in a speech that the Sino-US relationship was “facing its most serious challenge since diplomatic relations were established” four decades ago.

Tensions have recently returned to the boil after China circumvented Hong Kong’s legislature and imposed a national security law in an effort to stamp out the pro-democracy movement in the semi-autonomous territory.

Donald Trump, US president, said the move showed Hong Kong no longer enjoyed the autonomy it was granted under the “one country, two systems” model that was introduced as part of the return of the former British colony to China.

While Mr Trump has on occasions pulled his punches on China to avoid derailing trade talks, his administration has taken an increasingly tough stance over everything from human rights to espionage.

In his new memoir, John Bolton, who served as national security adviser for 17 months, said Mr Trump had not objected to the detention camps in Xinjiang during meetings with Xi Jinping and had essentially given his Chinese counterpart the green light to continue the mass detention.

More recently, Mr Trump has taken a tougher stance. As he has faced criticism for his handling of the Covid-19 pandemic, Mr Trump has accused China of concealing the extent of the outbreak which originated in Wuhan.

The growing frustration with China in the Trump administration is matched by rising anger on Capitol Hill, where the need to become tougher on Beijing is one of the few areas on which Democrats and Republicans agree.