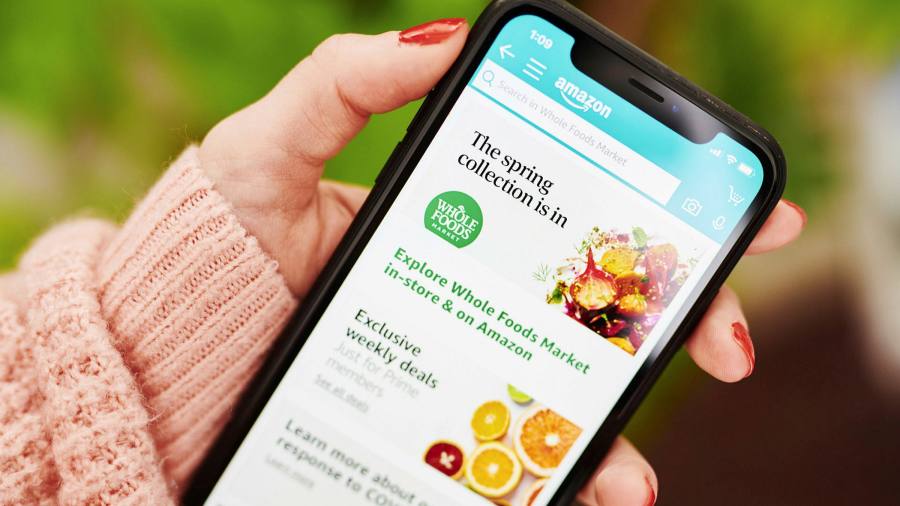 Online grocery sales in the US jumped by a quarter over the past month, according to research, as retailers solved the teething problems caused by heavy demand in the early stages of the pandemic.

A Brick Meets Click/Mercatus survey suggested that 43m US shoppers placed 73.5m online grocery orders in May, at an average of $90 per order. Sales in the period are estimated at $6.6bn, a 24 per cent increase over April — and a 450 per cent increase on the level in August last year.

It also found that household penetration for online grocery buying had risen to 33 per cent in May, up 2 per cent from April, and more than double what had been projected for this period before the impact of coronavirus.

The growth from April to May was said to have been driven by retailers expanding their capacity to handle online orders, by offering more time slots for delivery, hiring additional staff and reconfiguring stores.

At Amazon-owned Whole Foods, for instance, five stores are now “dark” — closed to walk-ins but ready to fulfil online orders. One further store, in San Francisco, has reduced its hours to focus on online customers only after 1pm each day. Other retailers have made similar moves.

The demand for online shopping suggests that the inconvenience of queueing for groceries, and of reduced shopping hours, has pushed more consumers online.

“We have just leapt forward several years relative to what our expectations would be for households shopping online,” said David Bishop, from Brick Meets Click, an ecommerce consultancy. “But that is not to say it is not full of challenges.”

Despite the added capacity, customer satisfaction with online groceries appears to be lower than before the crisis began, with less than half of those surveyed in March saying they would be “extremely” or “very” likely to use the same service again over the next 30 days.

“That’s really a reflection of the realities of getting a time slot, finding the products that you wanted to buy and delays around when you are getting them,” Mr Bishop said.

The demand for online orders is expected to drop off once lockdown measures are fully lifted across the country, with the impact of lowered household incomes making people less likely to pay a premium for the convenience of ordering online.

Retailers are also wary of such high levels of online sales, since margins are thinner compared with sales from customers who walk in the door, while the disruption caused by staff clogging the aisles as they pick online orders from shelves could deter more profitable walk-in shoppers from spending as much.

Automation could play a role in solving some of these problems, by using robots to aid in the picking and packing of customer orders away from the shop floor. At one of its stores — in Salem, New Hampshire — Walmart is testing Alphabot, a machine created by Massachusetts-based Alert Innovation. The robot is designed to autonomously pick items from a store room, preparing them for online pick-up or delivery.

Within the next decade, suggested Alert Innovation chief executive John Lert, hybrid stores — where humans picked fresh produce while backroom robots did the rest behind the scenes — would be able to cater to both online and in-person customers adequately.

“When I pick my peaches, I want to look for bruises and I want to look for ripeness, I’m exercising choice and judgment,” he said. “But I don’t look at boxes of cereal to see which is the best-looking box. Let the robot pick those.”

Amazon is also experimenting with the hybrid model. A new outlet in Woodland Hills, Los Angeles, is expected to offer a walk-in traditional grocery store and, in the same building, a robotics-powered mini-fulfilment centre for local online orders.