Washington hopes to capitalise on anger over persistent Chinese aggression in the South China Sea to rally rival claimants against Beijing.

China has continued to assert its dominance of the strategically important waters during the coronavirus pandemic even as other littoral states have been focused on dealing with the health crisis.

“Their harassment has not served them well. And it has helped start some conversations that we are having now about how to deal with China,” said a US diplomat in south-east Asia.

The incidents have piled up in recent weeks: the sinking of a Vietnamese fishing boat by a Chinese coast guard vessel; Chinese maritime survey activity in waters off Malaysia; and Beijing’s inclusion of disputed land features in new Chinese administrative districts.

Mike Pompeo, the US secretary of state, has accused Beijing of taking advantage of the pandemic and urged members of the Association of Southeast Asian Nations (Asean) to stand up to China.

“It is important to highlight how the Chinese Communist party is exploiting the world’s focus on the Covid-19 crisis by continuing its provocative behaviour. The CCP is . . . coercing its neighbours in the South China Sea,” Mr Pompeo said in a videoconference with Asean foreign ministers last month.

“The United States strongly opposes China’s bullying; we hope other nations will hold them to account, too.”

The push comes as Washington is targeting China with increasingly fierce criticism on an ever broader range of issues from trade to coronavirus.

Analysts reject the idea that Beijing has embarked on a new South China Sea campaign during the pandemic. But they do believe the outbreak is having an effect on perceptions of Chinese policy.

“China is doing what it is always doing in the South China Sea, but it is a lot further along the road towards control than it was a few years ago,” said Gregory Poling, director of the Asia Maritime Transparency Initiative at CSIS, the Washington-based think-tank.

“The US sees a window of opportunity now that Chinese diplomacy in south-east Asia is hitting a wall.”

Since 2012, China has built and militarised artificial islands and developed its coast guard and maritime militia, giving it de facto control of large parts of the waters. Other claimants have been powerless to stop or even slow that push.

From April 16, just as a Chinese maritime research vessel started survey work near an oil and gas exploration ship operated by Malaysia’s oil company Petronas in Malaysia’s exclusive economic zone, the US navy and marines began F-35 fighter exercises in the South China Sea. Shortly afterwards an Australian warship joined three US naval vessels for a joint exercise in those waters. 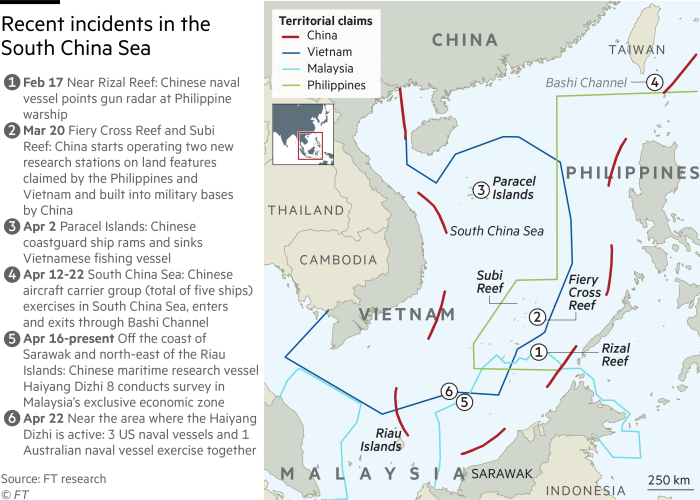 US naval ships or aircraft regularly traverse waters or airspace claimed by China. But such operations are largely meant to assert freedom of navigation, with other south-east Asian states seeing the US as focused on its own interests rather than supporting them.

Analysts said that impression had grown since Donald Trump became US president as his administration’s South China Sea policy had been limited to the so-called Freedom of Navigation Operations.

Malaysia, which is usually more subdued, protested against the stand-off at sea, but without mentioning China by name.

More surprisingly the Philippines — whose president Rodrigo Duterte is one of south-east Asia’s most pro-China leaders — made two diplomatic protests against the redistricting of islands and a previously undisclosed clash between warships from the two countries.

According to the Philippine navy, a Chinese corvette in February pointed a gun radar towards it. When the Philippine ship issued a radio warning, the corvette responded: “The Chinese government has immutable sovereignty over the South China Sea, its islands and its adjacent waters.”

Analysts believe the latest confrontations could convince a few countries to close ranks or align more closely with the US.

“It is interesting that the Philippines expressed support for Vietnam after the fishing boat incident,” said Bec Strating, a South China Sea expert at La Trobe University in Melbourne. “It is also interesting that the Australian navy exercised together with the US in some of the disputed waters.”

Michael O’Hanlon, head of the foreign policy programme at Brookings, a US think-tank, said China’s behaviour could play into the US’s hands. “It gives us a much stronger bargaining position over things like basing,” he said.