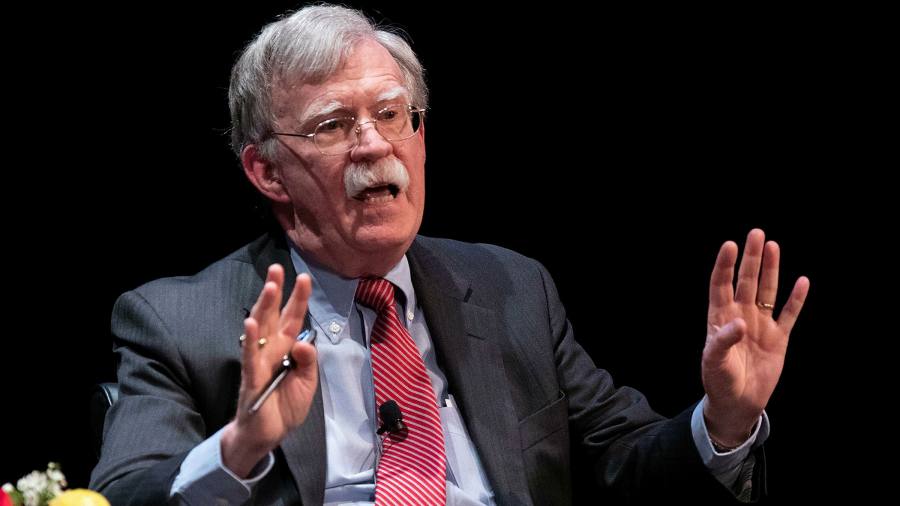 The US Department of Justice sued John Bolton on Tuesday in an attempt to delay the impending publication of a book about his time working as Donald Trump’s national security adviser.

US government officials with access to classified information are typically required to sign agreements promising to submit any books they write for pre-publication review.

Mr Bolton’s book, The Room Where it Happened, has not yet been cleared, but he and his legal team have claimed the Trump administration has abused the process to target him for political reasons.

The former national security adviser left the White House last year after disagreements on questions about Iran and North Korea. Mr Trump and Mr Bolton have publicly sparred over whether he was fired or resigned.

Mr Bolton, a well-known advocate for overseas regime change, has touted his book as a tell-all about Mr Trump’s misdeeds in the foreign policy arena. He declined earlier this year to testify in the House Democrats’ impeachment inquiry into Mr Trump’s dealings with Ukraine, and later offered to appear before the Republican-controlled Senate, which ultimately did not hear from witnesses before acquitting the president.

Mr Trump on Monday criticised Mr Bolton for writing about his time in the White House, claiming that “Any conversation with me is classified” and threatening that his former national security adviser would have “criminal problems” if “the book gets out”.

The civil lawsuit filed in federal court in Washington claimed Mr Bolton was trying to renege on his non-disclosure agreement by “unilaterally deciding that the pre-publication review process is complete and deciding for himself whether classified information should be made public”.

It asked the court to rule that Mr Bolton had committed a breach of contract, seize any money he earns from the book, and “instruct or request his publisher, insofar as he has the authority to do so” not to publish until the pre-publication review is complete.

Mr Bolton’s attorney, Charles Cooper, did not immediately return a request for comment. In an op-ed for the Wall Street Journal last week, Mr Cooper said the White House had sought “to use national security as a pretext to censor Mr Bolton, in violation of his constitutional right to speak on matters of the utmost public import”.

Simon & Schuster, the White House and DoJ did not immediately return requests for comment.

Mark Zaid, a Washington-based lawyer with experience handling pre-publication review matters, said the justice department was likely to succeed in winning any profits from Mr Bolton’s book, though he was sceptical the government could block publication.

“Anyone who finds themselves on the receiving end of one of these lawsuits best be prepared to write a cheque,” he said.