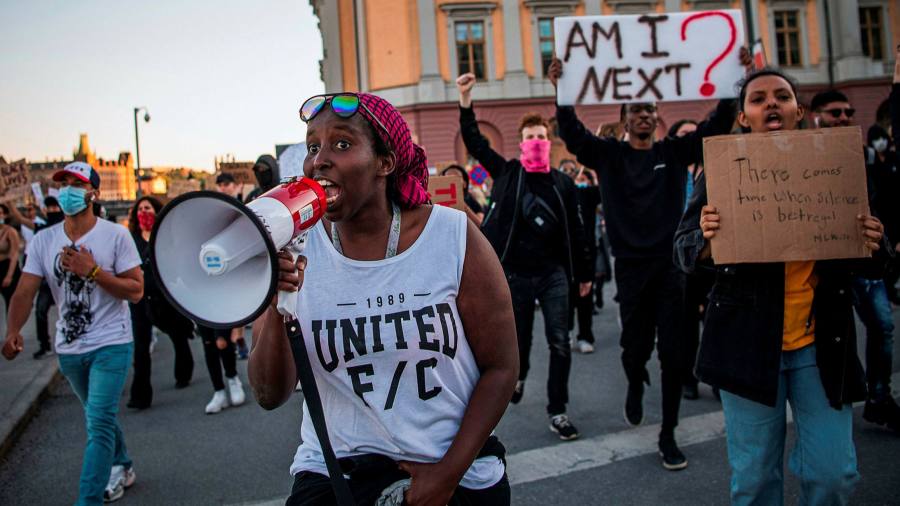 At its midpoint, 2020 is turning out to be one of the darkest years in the peacetime history of the US. It has also affirmed the nation’s global primacy beyond any doubt. Fear not for your columnist’s grip on logical reasoning, at least any more than usual. These contrary claims are reconcilable.

The first comes from a mere glance at the facts. The US accounts for a quarter of the world’s recorded deaths from Covid-19. Its people are ignominiously barred from entry to the EU and other allied territories. Unemployment is at its highest rate for a human lifetime. The killing of George Floyd has exposed racial inequities and highlighted once more a homicide rate that marks America out among rich countries.

Even if the Depression was more acutely harrowing, there was no pandemic and, from 1933, people had Franklin Roosevelt to lead them, not a thrown, lost-looking Donald Trump. On that point, with the logistical test of a presidential election still ahead, the year has ample room to get worse.

Compounding these traumas is intense scrutiny from the rest of the world. And so to the second claim. The US is the only nation today whose domestic failings could set off vast protests in other continents. For all its heft, China does not draw young Europeans to the streets on behalf of Uighurs or the cause of democracy in Hong Kong. At least not in such awesome numbers. It took the Floyd killing at the hands of police to do that. And, while the US has botched its response to the coronavirus pandemic, other countries with dismal records (namely Britain) escape without the same volume or tenor of foreign coverage.

Such exposure was the price America once paid for its overwhelming superiority in economic scale and military potential. It was a tax on world leadership and, as such, eminently affordable. With China’s gains in both gross domestic product and armaments, however, even this consolation no longer applies.

The US, then, finds itself in the worst of all possible worlds. Its external power and internal cohesion are manifestly in decline. Its psychic hold on the rest of humanity is not. The result is a level of scrutiny that no other nation, not even the other superpower, has to experience — or, perhaps, could withstand. The tighter the inspection, the more numerous the revealed flaws, and the more compromised is America’s ability to command global deference. The whole process is viciously circular. What is a boon for a Washington correspondent — everyone, everywhere has an opinion on the US — can be a bane for Americans themselves.

As the tussle develops, China’s obvious advantages over the US include a four-times-larger population and a one-party system’s ability to plan long-term. But a less discussed one is the world’s lower level of obsession with it, for now. This is more often framed as a liability: a lack of soft power, of cultural magnetism, compared with the land of Netflix and all-conquering pop stars. But the corollary is greater freedom from outside invigilation.

A discreet rise is what China is said to have achieved over recent decades. The US is condemned to the exact opposite: to wane in public, like an actor who no longer commands the plum roles but remains hounded by paparazzi. Its crimes and mistakes are still aired like no other nation’s.

It was natural that America held the world rapt when that world was unipolar. That it continues to do so in 2020 needs some explaining. One reason is the country’s relative openness to media coverage. Another, reinforcing the first, is the English language: it is easier for the average European (or Australian or Nigerian) to follow US public life than China’s. Yet a third reason, it has to be said, is America’s self-image as a standard bearer for the species. Claim city-on-a-hill status, and cynics will comb the city for blemishes and signs of subsidence, even if they do so with tasteless relish or with great hypocrisy. Mr Trump, a raw nationalist, tends to avoid talk of the US as a moral experiment on behalf of mankind. His successors should retain this if no other feature of his presidency.

This week, the UK government named some policies after Roosevelt’s New Deal, a now almost 90-year-old programme of disputed effectiveness undertaken in different circumstances in a different continent. The way the US continues to serve as a reference point is impressive. It is a vestigial mark of its time as a truly unchallenged power. But it comes at the cost of painful exposure. The world is moving on from American hegemony. It is not moving on from the American spectacle.