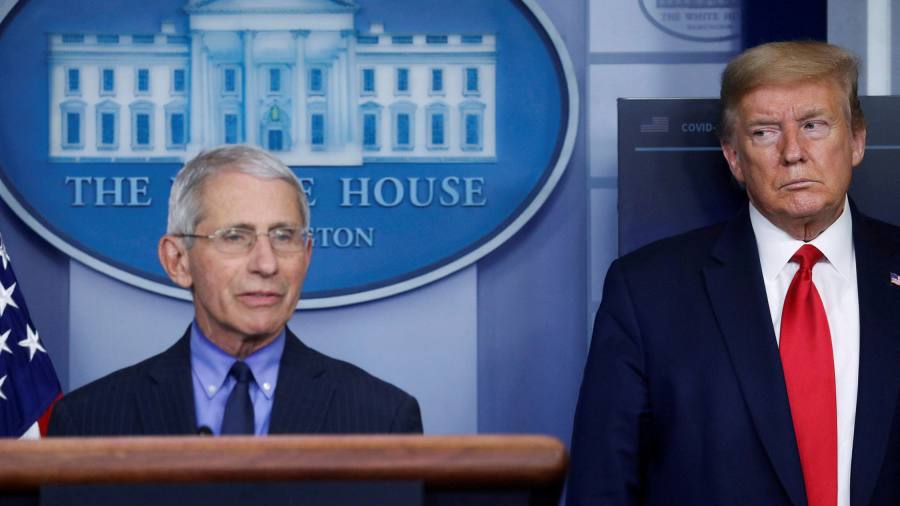 The writer is chairman of Fulcrum Asset Management

The relentless rise in the number of new US Covid-19 infections, which is being followed by increased hospitalisation rates and fatalities in the worst affected states, suggests that Anthony Fauci of the White House coronavirus task force was justified when he recently described the deteriorating situation as a “perfect storm”.

So far, the US policy response has been muted, certainly compared to nationwide lockdowns in other countries in March. And markets remain surprisingly relaxed, reportedly because investors are optimistic that an effective vaccine from the Oxford university or Moderna trials may be “within sight”. Those trials are highly encouraging. But even the most favourable outcome in vaccine development would come too late to save the US economy from the spread of the virus over the next three months.

Unless public policy can control the rate of infections across the American sunbelt, there could be adverse consequences for any US economic recovery over the rest of this year. Consensus economic forecasts have not yet given much weight to this increasing risk, although the US Federal Reserve is increasingly worried.

Fulcrum economists have developed a new model which tracks the epidemic on a state-by-state basis, based on the now-familiar SIRD model used by the Imperial College Covid-19 response team and other researchers.

It suggests that the virus’s effective reproduction number, known as R, is now above the critical level of 1 in all but five of the US’s 50 states. Weighted by gross domestic product, this means that 95 per cent of the US economy is affected by a viral reproduction rate high enough to cause an exponential rise in the number of cases — unless something intervenes to prevent this. Other researchers have found similar results.

This spread of R levels above 1 is the broadest it has been since the epidemic started. In March, absolute levels of R were higher in the north east, when the reproduction rate exceeded 3 for several weeks and infection numbers doubled every few days.

In the current wave, the generally lower levels of R have slowed down the spread of the disease. Furthermore, the age distribution of the infected group is younger, and the case fatality rate within intensive care units has fallen as treatment has improved.

As a result, there has been political resistance to full lockdowns in the most severely affected states. Unfortunately, international experience suggests that delayed lockdowns result in worse outcomes for cases and fatalities, at least in the short term.

The key economic question now is how much damage to activity will be incurred as policy lockdowns and voluntary social distancing bring the epidemic under control. So far, the answer is very little.

According to Harvard University economist Raj Chetty’s website, which tracks the recovery and is based on big data, US consumer expenditure has flattened since late June but not fallen substantially — even in the most affected states. Trackers based on Google searches and other big data paint a similar picture.

Most forecasters therefore assume that there will be nothing worse than a brief period of stable activity. This would result in strongly positive growth between the second and third quarters. For example, Goldman Sachs believes the virus may be controlled by measures focused on ending indoor gatherings and promoting the wearing of face masks. Both of these have been effective in some states.

Such measures would fall short of full stay-at-home lockdowns, permitting the economy to resume recovery. Arizona is one example of a state that has made encouraging progress. However, the downside risks are obvious.

This would lead to a large drop in activity — in effect, a double dip — of about 7 percentage points through the whole economy while the lockdowns last. If the situation persisted for three months, it would knock almost 2 percentage points from this year’s growth rate, compared to the latest consensus forecasts.

This double dip may not be the most likely outcome, right now. But is a highly plausible worst-case scenario if the national spread of the virus is not brought under control soon.