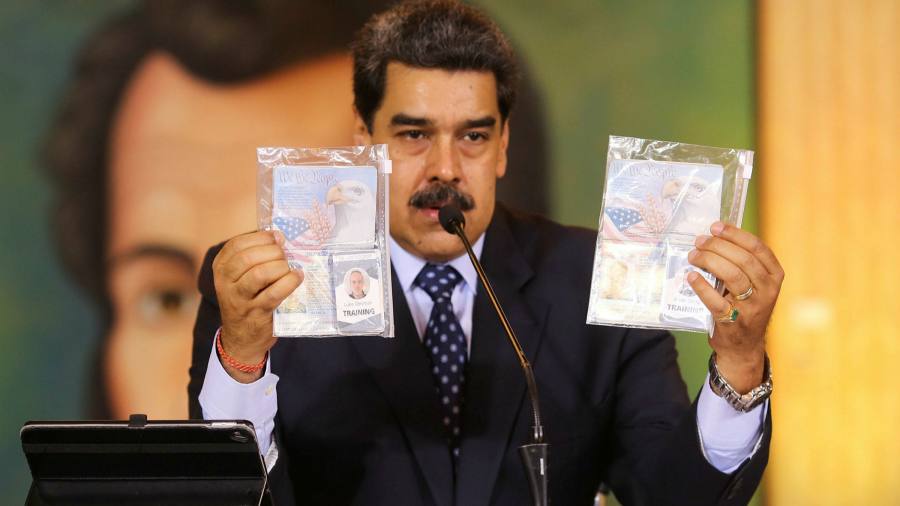 A former US soldier being held captive in Venezuela said in a statement broadcast on national television on Wednesday that he and a team of accomplices planned to seize an airport in Caracas and use it to fly the country’s socialist president, Nicolás Maduro, to the US.

In the video, aired during a Maduro news conference, former army officer Luke Denman said he has been instructed by his boss “to ensure that we took control of the airport for safe passage for Maduro and receiving of aeroplanes”.

He said his tasks included “securing the sector . . . bringing in planes, one of which includes one to put Maduro on and take him back to the US”.

It was not clear where or under what circumstances the video was recorded. Human rights groups have in the past accused the Maduro regime of using coercion to extract confessions from suspects.

As this week’s extraordinary developments on the Venezuelan coastline have unfolded, the US state department has said the Maduro regime is undertaking a “major disinformation campaign” and that it was hard to separate facts from propaganda.

In the video, Mr Denman, 34, appeared calm and lucid. Wearing a grey T-shirt, he was asked a series of questions from off-camera in English. He replied in English, mostly looking directly into the camera. A former US special forces operator said US officials would study Mr Denman’s expressions for indications he was speaking under duress.

The Maduro government says he and another former US soldier, Airan Berry, were arrested on Monday after they and several Venezuelans tried to come ashore on a beach west of Caracas. Mr Maduro described the group as “terrorist mercenaries” aiming to overthrow his government.

Mr Trump and other members of his administration — including Mike Pompeo, US secretary of state, and Mark Esper, secretary of defence — have strenuously denied any involvement by Washington.

“Assertions to the contrary are not credible, and in fact, they are almost comical. A US operation would have looked much different,” a senior Trump administration official said.

The US was committed to pursuing its “maximum pressure” campaign against the Maduro regime, the official added, in an effort to bring about a peaceful transition of power.

The official said the US was “intensely monitoring any potential threats to the safety and security” of Venezuela’s opposition leader, Juan Guaidó, whose claim to be the country’s legitimate interim president has been backed by Washington and dozens of other governments. Mr Guaidó has denied any involvement in the alleged plan aimed at Mr Maduro.

On Sunday, the Venezuelan government said security forces killed eight “terrorist mercenaries” and arrested two more as they tried to steal ashore before dawn. It said one of the detainees worked for the US Drug Enforcement Administration. The DEA has denied any involvement.

Mr Maduro has showed what he says are the passports and identity cards of Mr Berry and Mr Denman. He described them as “members of Donald Trump’s security”, without offering evidence.

The incursions come at a time of heightened tension between the US and Venezuela. In March, the US Department of Justice charged Mr Maduro and a dozen associates in connection with “narco-terrorism” and other crimes, offering $15m for information leading to the president’s arrest.

Last month, the US sent warships close to the Venezuelan coast as part of a major anti-narcotics operation.