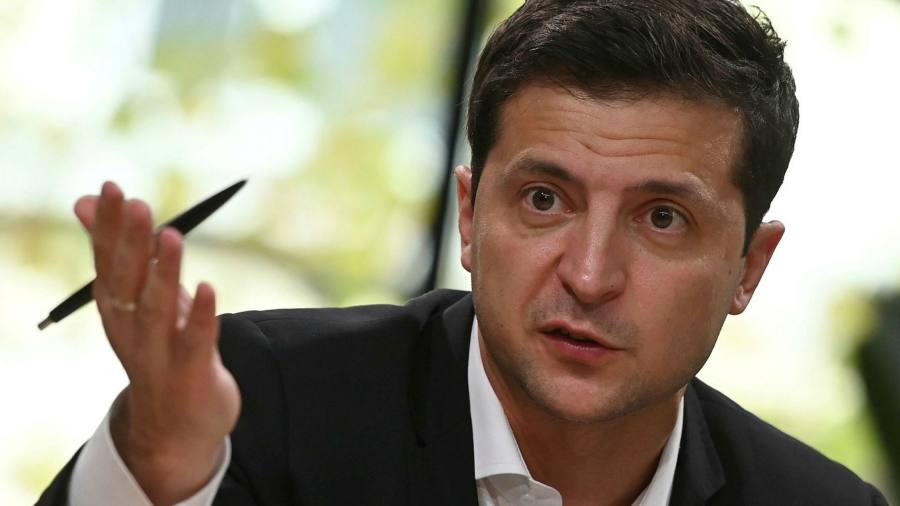 The head of Ukraine’s central bank has resigned saying he had been subjected to “systematic political pressure” that prevented him from doing his job.

The departure of Yakiv Smolii as governor of the National Bank of Ukraine is a serious blow to the reformist credentials of President Volodymyr Zelensky and could jeopardise a recently agreed $5bn IMF bailout as the country reels from the economic effects of coronavirus.

“This decision has been taken as an answer to systematic political pressure that denied fulfilment of my duties as the Governor,” Mr Smolii said in a tweet. “Let it be a warning for attempts to undermine institutional independence of the central bank.”

Valeria Gontareva, Mr Smolii’s predecessor as governor, said his departure was a “disaster”.

“The NBU is the last bastion of reforms in Ukraine,” she said.

In a joint statement on Twitter, ambassadors from Ukraine’s G7 allies in Kyiv issued a warning to Mr Zelensky following Mr Smolii’s resignation announcement. “To undermine this crucial institution would be a big step back and jeopardise the credibility of and support for Ukraine’s reforms,” they said.

The central bank has been under attack since the presidential election. As soon as Ukraine got its IMF aid tranche the attacks accelerated

“The NBU is the most trusted institution among foreign institutional investors. Terrible news for Ukraine,” said Timothy Ash at BlueBay Asset Management in a tweet. “The future of the IMF programme must be in doubt. Who succeeds Smolii will be critical.”

Mr Zelensky is a former television comedian who was elected president last year on a promise to tackle corruption and modernise the economy. But in March he ditched his prime minister and US-educated economy minister as well as a reforming prosecutor-general, raising serious doubts about his commitment to clean up the country.

The NBU is one of Ukraine’s few well-respected government bodies and is credited by international investors and Kyiv’s western donors with taming inflation and stabilising the economy after Russia’s annexation of Crimea and instigation of an insurgency in the east of the country in 2014.

It also spearheaded a clean-up of Ukraine’s dysfunctional and corrupt banking system, closing down scores of institutions. It nationalised PrivatBank, Ukraine’s largest lender after regulators found a vast hole in its balance sheet, allegedly from corrupt loans. Given PrivatBank’s systemic importance, it had to be recapitalised costing the taxpayer as much as 7 per cent of gross domestic product.

The bank was owned together with some associates by Igor Kolomoisky, a powerful oligarch and supporter of Mr Zelensky. Mr Kolomoisky has been waging a campaign to have the nationalisation declared illegal in the courts.

In December, the NBU issued a statement decrying a campaign of intimidation against the central bank.

“Terror and pressure on the NBU — the institution, the board, and the collective staff — is continuing. Yesterday and today, it has taken the form of personal persecution of the employees and families of employees of the NBU. [The NBU] is outraged at how paid ‘organisers’ of such rallies distort the democratic right of citizens to freedom of speech and free expression of their views, in the service of certain business interests.”

“The central bank has been under attack since the presidential election,” said Ms Gontareva. “As soon as Ukraine got its IMF aid tranche the attacks accelerated. Zelensky and his team wanted this resignation long ago.”

Ukraine’s parliament recently passed legislation to safeguard the banking clean-up, an IMF condition for agreeing to a rescue, but the law is being challenged by Mr Kolomoisky in Ukraine’s constitutional court.

“The business community has serious concerns now about the independence of the National Bank and the continuation of the IMF programme,” said Andy Hunder, president of the American Chamber of Commerce in Ukraine. “Governor Smolii commanded great respect among international business and investors for his excellent track record. The timing of this unexpected move couldn’t have come at worse time with Ukraine’s economy in decline.”

Mr Ash pointed out that the governor’s resignation came as Kyiv launched a new 12-year eurobond.

“Investors will be sitting on loads of bonds feeling very worried now where this is going,” Mr Ash said.