Uber has abandoned a plan to run its own food delivery kitchens, taking itself out of competition with its ousted founder Travis Kalanick.

Since November 2018, Uber had run an “Eats Delivery Hub” in Paris, renting kitchen space to restaurateurs to make delivery food for its Eats business. But as part of a drive to cut costs and focus on profitability, it quietly closed the operation at the end of last year.

“At this point, we don’t have a desire ourselves to own real estate,” said Pierre-Dimitri Gore-Coty, head of Uber Eats, to the FT. “We’ve had a few pilots, but no intention at this stage to start our own proprietary network of dark kitchens, or warehouses . . . or however you call them.”

Over the past few years, several start-ups and some of Uber’s food delivery rivals have poured money into kitchens that only serve delivery customers, building networks of so-called “cloud”, “ghost” or “dark” kitchens.

Some of these companies are now reassessing their business models, with both restaurants and apps struggling to turn profits from food delivery.

Mr Kalanick, who has poached some of his former colleagues at Uber, has rapidly expanded his CloudKitchens start-up in the US, Europe and Asia, spending heavily to buy up warehouse space and convert it into delivery kitchens.

But one of his key collaborators from the restaurant industry has backed out, unconvinced the model can both produce quality food and make money.

“I think the only reason why other people are doing [delivery kitchens] is because they’re seeing him do it,” said Eric Greenspan, renowned LA-based chef and restaurant entrepreneur. “Travis sets the pace.”

Mr Greenspan launched several restaurant concepts with CloudKitchens, lending his face to the company’s website as a means of attracting more like him.

But he has since cut ties, saying it was difficult to use a cloud kitchen, without a storefront, to attract business, unless you were offering an already known brand — such as a national fast-food chain — or you spent heavily on marketing in order to rank highly for searches such as “pizza”.

“It’s not what interests me as a chef, or as an entrepreneur,” he said.

Uber said it would focus on persuading existing restaurants to create new menus and brands to be cooked at the same location. For example, a San Francisco location of the chain Umami Burger uses the same kitchen to cook food for Sam’s Crispy Chicken, a brand which exists only on food delivery apps. 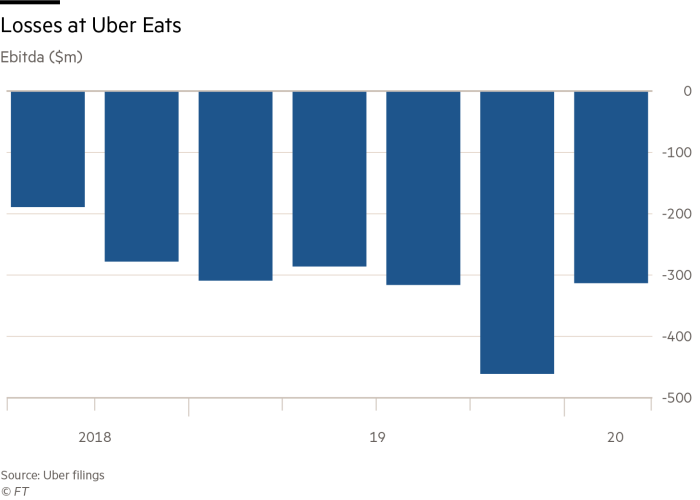 Other delivery kitchen start-ups have doubled down on the business.

Reef, formerly known as ParkJockey, operates thousands of car parks across North America. After exploring turning these parking lots into hubs for autonomous vehicles or e-scooter charging, Reef has now accelerated plans to deploy delivery kitchens after the pandemic shut down in-house dining for most restaurants. Ari Ojalvo, Reef’s chief executive, said it now has more than 90 kitchens up and running, almost doubling during the pandemic.

“Over the next four or five years, we are looking at several thousand” such facilities, he said. “With Covid, this is a giant experiment in what happens if everyone suddenly moves to an on-demand economy.”

Reef has settled on a business model that sees it license brands and recipes from restaurateurs, for a single-digit percentage of the price of a dish, and then prepares food delivery orders using its own food suppliers and staff.

“We are the operator, we produce within their quality requirements,” Mr Ojalvo said. “That is the business model we like the most and we believe in for the future of the company.”

To fuel its expansion, Reef is now in talks with investors to raise hundreds of millions of dollars in new investment, Mr Ojalvo said, at a “significantly higher” valuation than when SoftBank invested in late 2018 at a price tag in excess of $1bn.

Corey Manicone, the chief executive of start-up Zuul, said the pandemic meant “every restaurant became a ghost kitchen overnight” and restaurateurs are now wondering if they can use the same model to expand into new areas.

As well as renting out kitchen space, Zuul is looking to offer a wider range of services to its tenants. It provides software so restaurants can take orders directly from their own online storefronts, avoiding delivery-app providers’ fees. “By bringing the tech in-house, the idea is to drive demand for the brands at better margins,” Mr Manicone said.

Each of these approaches to dark kitchens is an attempt to squeeze new efficiencies from online food delivery. In an industry yet to produce any real winners, drivers are feeling exploited by low pay, restaurants are feeling cheated by high rates of commission and tech platforms are burning cash in pursuit of market share.

Mr Greenspan, the chef and author, said efforts by Mr Kalanick and his rivals were “super smart”, but success with dark kitchens would likely mean leaving acclaimed restaurateurs like him behind.

“I just think that we’re in a different business,” he said. “They’re in a global domination, facilities business. I just want to make you a great fried chicken sandwich.”