Turkey’s death toll from coronavirus could be as much as 25 per cent higher than the government’s official figure, adding the country of 83m people to the raft of nations that have struggled to accurately capture the impact of the pandemic.

Ankara has previously rejected suggestions that municipal data from Istanbul, the epicentre of country’s Covid-19 outbreak, showed that there were more deaths from the disease than officially reported.

But an analysis of individual death records by the Financial Times raises questions about the Turkish government’s explanation for a spike in all-cause mortality in the city of almost 16m people.

The FT findings show 3,377 more deaths in Istanbul when compared with the average for the same period in March and April over the previous five years.

Nationwide, all-cause mortality data for Turkey are only available with a lag of more than a year. But the Istanbul figures suggest that the true Turkey-wide toll could be as much as 25 per cent higher than the official figure, which stood at 2,706 on April 26. 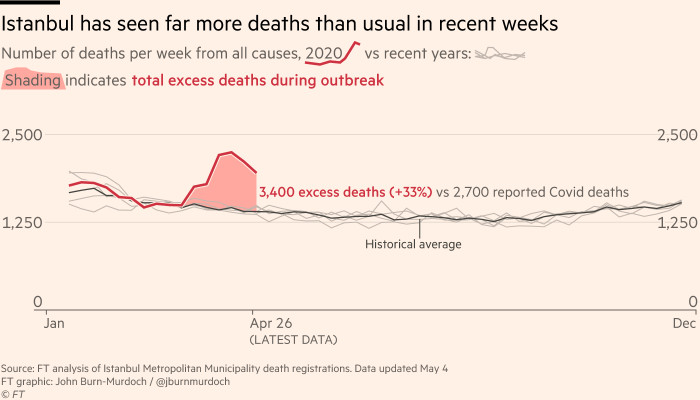 “These figures indicate under-reporting of Covid-19-related deaths,” said Onur Altindag, an economist specialising in health at Bentley University in Massachusetts, US. “There are clear patterns of excess mortality in Istanbul, which is not surprising.”

Mr Altindag stressed that there was no evidence of deliberate misreporting, adding that accurate coronavirus mortality data was “a notoriously difficult task even for countries with the most advanced death registries”.

Previous analyses by the FT have suggested that the death toll in the UK is double the official figure, while the worldwide figure could be 60 per cent higher than reported.

The true death toll has become a subject of heated debate in Turkey, a deeply polarised country where there is profound mistrust between opposition groups and the government.

Doubts about the figures have been stoked by the government’s sometimes harsh response to those who have questioned the data — including the arrest of several hundred people for “provocative” social media posts — and its reluctance to publish regional breakdowns.

The FT’s analysis lends credence to warnings from the Turkish Medical Association (TTB), a trade union, that the official death toll is under-reported. Deaths from coronavirus are only officially counted following a positive test, and the TBB says that, while testing levels have increased, they are still not high enough.

Yet the analysis also supports President Recep Tayyip Erdogan’s claim that Turkey has a much lower death rate than many European countries and several US states. It corroborates official assertions that the country has reached a “turning point” in the outbreak, with the number of new daily deaths on the decline.

Details of deaths in Istanbul are available almost in real time through a central government website. A comparison of this year’s data with previous years shows a marked spike in deaths that began in mid-March, less than a week after Turkey’s first confirmed case of Covid-19.

Some of these deaths could be explained by a reluctance among people who are sick with other ailments to go to hospital to seek treatment amid the pandemic. But expert consensus worldwide is that the impact of that phenomenon is usually dwarfed by deaths from coronavirus.

Stephen Evans, a statistical epidemiologist at the London School of Hygiene and Tropical Medicine, said that all-cause mortality was important for examining the true impact of the outbreak. “You actually need to look at total deaths, and not just deaths ascribed to Covid-19,” he said.

Turkey’s government has repeatedly rejected assertions that the Istanbul figures point to a higher-than-reported death toll from coronavirus in the country. Responding to an article published last month by the New York Times, Turkey’s health minister Fahrettin Koca insisted that the Istanbul data set was a registry of burials in the city rather than a registry of deaths.

He said that travel restrictions aimed at stopping the spread of coronavirus meant that Istanbul residents who would normally be buried in their ancestral homeland were instead being laid to rest in the metropolis, leading to higher than usual burial numbers.

Ekrem Imamoglu, the opposition mayor of Istanbul, disputed this, claiming that 30 to 35 per cent more people were dying than usual in the city.

The FT analysis supports Mr Imamoglu’s assertions. It shows that, both before and after the onset of the virus outbreak, people who died in Istanbul but were buried elsewhere were usually logged in the city’s records.

Asked to comment on the findings, Turkey’s health ministry directed the FT to comments made by Mr Koca during a press conference last week.

The health minister accused some people of trying to “play politics” with the crisis and rejected claims that the official death toll could be incorrect.

He said that there had been a small increase in nationwide all-cause mortality this year, which was lower than the official coronavirus death count. “Where are they, these imaginary deaths?” he said.

But Kayihan Pala, a public health expert and a former opposition parliamentary candidate, said deaths due to some other common causes could have dropped during the pandemic. “We also need to examine the secondary effects of measures taken against coronavirus,” he said. “For example, because of the decrease in traffic, deaths linked to traffic accidents may have fallen.”

The FT examined 15 Turkish media reports of deaths from both before and after the coronavirus outbreak. All of the cases were people who died in Istanbul and were buried elsewhere in Turkey.

In 11 out of the 15 cases, we found that those who died had been logged in the Istanbul records, even though they were buried in other provinces. This raises questions about official claims that the Istanbul data shows burials in the city, rather than deaths.

For example, Cengiz Koc, the father of an official from Turkey’s ruling party, died of a heart attack in Istanbul in February and was buried in Konya. His death appears in the Istanbul data.

The same recording practice has continued since the onset of the coronavirus outbreak, both for Covid-19 deaths and those from other causes.

Nafiye Ilce, a woman in her nineties who died in Istanbul in late April, was buried in Amasya province but appears in the Istanbul records.

The FT only examined data for Turkey’s largest city. Bentley University’s Onur Altindag, who has analysed data for 10 other provinces across Turkey, said he found “little evidence” of a similar upsurge in mortality rates in those regions, suggesting that the problem of under-reporting may be limited to Istanbul.

But recent death records for Ankara and Izmir — Turkey’s second and third-biggest cities — are not publicly available. The government has resisted calls to publish a daily city-by-city breakdown for confirmed coronavirus cases and deaths.