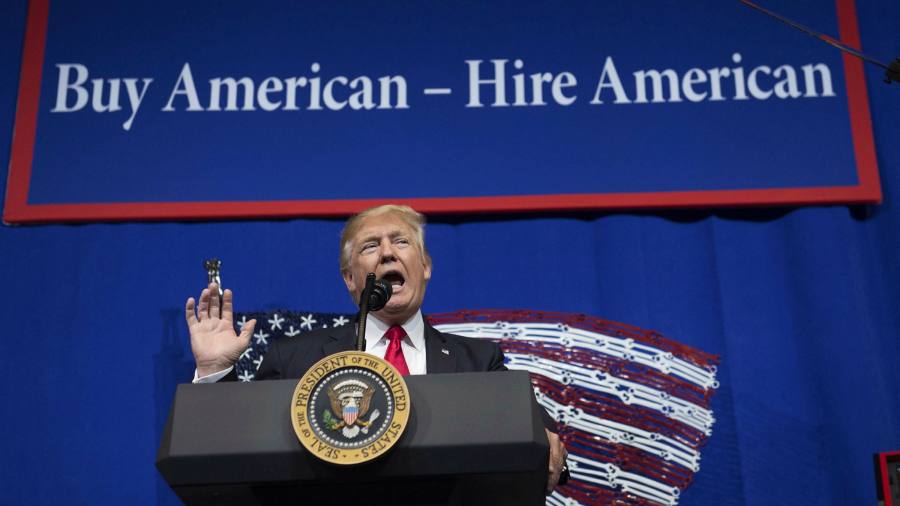 Donald Trump will extend a suspension of immigration into the US imposed in response to the coronavirus pandemic, banning green card applications for the rest of the year and introducing restrictions on other visa categories, including those for high-skilled jobs.

A senior official said Mr Trump was also limiting other visas, including H-1Bs, which are frequently used by technology companies, and H-2s, which are used for lower-skilled jobs. The official said the restrictions would create employment opportunities for roughly 525,000 Americans.

“He is leading an ‘America First’ recovery and as part of that. He’s extending and expanding the suspension of certain visas . . . through December 31,” the official said about the restrictions introduced by Mr Trump.

In April, Mr Trump suspended immigration by ordering a ban on applying for green cards — which grant US permanent residency — for at least 60 days. He said the move was meant to protect jobs, as US unemployment surged due to the pandemic.

“There is no way to protect already disadvantaged and unemployed Americans from the threat of competition for scarce jobs from new lawful permanent residents,” Mr Trump said in April.

Chuck Robbins, the chairman and chief executive of Cisco Systems who chairs the immigration committee of the Business Roundtable, on Monday told the Financial Times that business leaders had been adamant in explaining to the administration why it would be damaging to shut these programmes down.

“We still have a talent shortage in the tech field,” Mr Robbins said. “This may be a Canadian Jobs Creation Act. You can go to Toronto and hire people there and work quite effectively. That is the risk we run if we start to eliminate these programmes.”

In a memo that accompanied the April order, the White House said Mr Trump would review “guest worker” programmes, which includes people on agricultural H-2A visas and non-agricultural H-2B visas, as well as H-1B visas used to hire the critical high-skilled labour for technology companies.

The move to further restrict immigration comes as Mr Trump revs up his re-election campaign. Four years ago, he won the White House partly by stoking fear about illegal immigration from Mexico and other countries. Political analysts expect Mr Trump to return to the issue of immigration again this year, particularly as he struggles against Joe Biden, the Democratic presidential nominee, in the polls.

Mr Biden leads Mr Trump by 9.5 points, according to an average of recent polls compiled by Real Clear Politics. Mr Trump relaunched his campaign with a rally in Tulsa, Oklahoma on Saturday, but the event was attended by fewer than 7,000 supporters, despite the campaign saying they had received interest from more than 1m Americans.