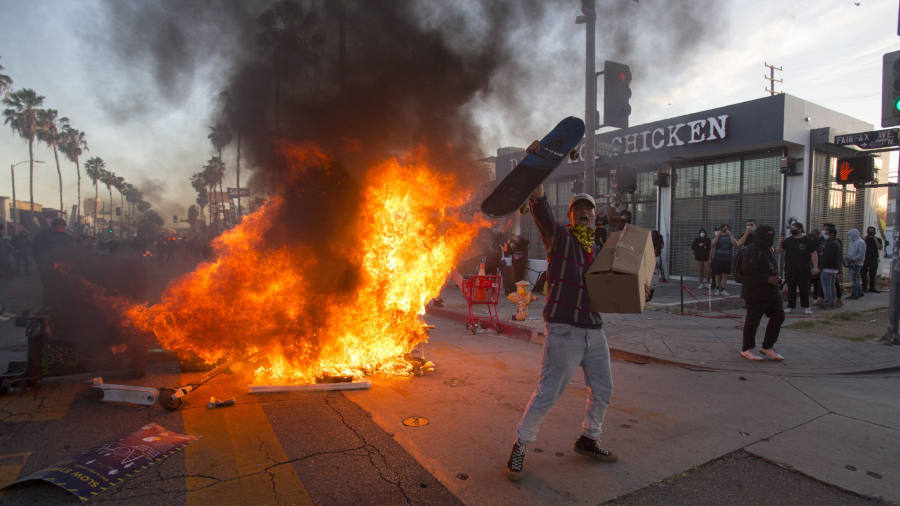 The novelist William Faulkner said: “The past is not dead. It is not even past.” The past 72 hours of burning US cities triggered parallels with 1968 — a year of urban white flight that ended with the election of Richard Nixon. He won on a law-and-order platform that appealed implicitly to white anxiety. Donald Trump does not deal in implicit language. In response to protests in Minneapolis after the police suffocation last week of George Floyd, a 46-year-old black man, Mr Trump tweeted: “When the looting starts, the shooting starts”. The line was used by George Wallace, the segregationist third-party candidate in 1968. Republicans launched the “southern strategy” to win over resentful white Democrats after the civil rights revolution. Mr Trump’s 2016 campaign was the apotheosis of that approach.

But history offers little clue as to whether a sitting president can profit from the same manipulation. The stark brutality of Floyd’s killing — and the fact that his eight-minute suffocation was captured on video — has curbed Mr Trump’s ability to portray the police as victims. He has veered between threats of deploying the military to quell the protests and appeals for calm. Mr Trump’s record suggests he will not be able to resist the temptation to incite. It worked for him once. America’s Black Lives Matter movement took off in Barack Obama’s second term just as Mr Trump was weighing up his presidential bid. “White lives matter” and “Blue lives matter” banners festooned his rallies.

But can he pull off the same feat from the White House? That will depend on how America defines the protests. Wildly different narratives can be built from the harrowing range of video clips over the past few days. Some show white police officers brutally attacking peaceful black and white marchers. Others show cops marching in solidarity with them. Then there are the scenes of looting and burning. Mr Trump claims that most of the Minneapolis protesters are far-left radicals. Anti-Semitic memes claiming that financier George Soros is funding an army of Antifa (anti-fascist) militants have spread. Russian bots have helped disseminate the conspiracy theory. The Trump administration has picked up that thread. In a televised statement Bill Barr, the US attorney-general, said the protests were “planned, organised and driven by anarchic and far-left extremist groups using Antifa-like tactics”. Without evidence, Mr Trump said 80 per cent of the Minneapolis protesters were from out of state. On Sunday, he tweeted that he would designate Antifa as a “terrorist organisation”.

America now faces the spectre of a long summer of unrest, with a president stoking the polarisation. It comes amid a pandemic that has disproportionately claimed minority lives in the most densely populated areas of urban America. Floyd’s dying words — “I can’t breathe” — serve as a metaphor for a society choking on its increasingly toxic politics. The alternative narrative advanced by Joe Biden, Mr Trump’s opponent, is that America is crying out to be healed. Mr Biden promises to “restore America’s soul”. If recent polls are any guide, Mr Biden’s message is hitting home. A Washington Post/ABC poll gave him a 53 per cent to 43 per cent lead over Mr Trump.

But that snapshot was taken mostly before the protests had spread to other cities. Harking back to America’s better angels, as invoked by Abraham Lincoln, Mr Biden’s message has historic appeal. But nations do not possess souls. They have competing ideas of themselves. Mr Biden wants to restore the US to where it was before Mr Trump was elected — a multicultural society with its first non-white president. Mr Trump makes little disguise of conjuring a pre-civil rights America where white males held uncontested sway. He will blame Mr Obama, China, radical leftists and “thugs” for America’s unhappy condition — anybody, in other words, but himself. It is hard to imagine a more dystopian backdrop for the world’s most powerful democracy to settle on its future.