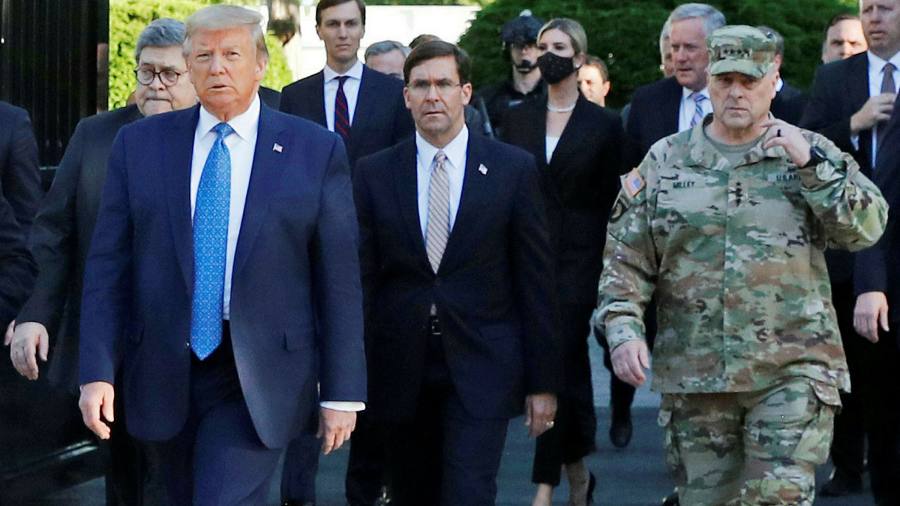 The top uniformed US military official has apologised for walking with Donald Trump to a church near the White House last week after police cleared the area of protesters, saying it was a “mistake” for him to accompany the US president.

“My presence in that moment and in that environment created a perception of the military involved in domestic politics,” General Mark Milley, the chairman of the joint chiefs of staff, said on Thursday in a recorded address to graduates of the National Defense University.

“As a commissioned uniformed officer, it was a mistake that I have learned from, and I sincerely hope we all can learn from it.”

Police last week aggressively dispersed people who were protesting the death of George Floyd in Lafayette Square, in front of the White House, clearing a path for Mr Trump to walk to St John’s Episcopal Church. When the president arrived at the church, he held up a copy of the Bible for the cameras in what was widely panned as a publicity stunt.

The president was joined on the walk by General Milley, who wore combat fatigues, and other top officials, including US defence secretary Mark Esper.

After the episode, Mr Esper broke with the president and said he did not agree with Mr Trump about sending the army to clamp down on protests.

Mr Trump has repeatedly threatened to invoke the Insurrection Act to overrule state governors and send active-duty military on to US streets.

The National Guard was activated earlier this month in dozens of states in response to civil unrest over Floyd’s death, although a National Guard spokesperson said Wednesday that the number of soldiers on the streets is now “steadily decreasing as governors assess their needs”. The National Guard, a reserve of 450,000 citizen-soldiers who serve on a part-time basis, reports to state governors.

Mr Trump’s actions in Lafayette Square have sparked sharp criticism from across the political spectrum, including multiple Republican senators and Jim Mattis, a retired general who previously served as defence secretary to Mr Trump. Mr Mattis accused the president of making “a mockery” of the US constitution, which guarantees Americans’ rights to “peaceably . . . assemble”.

Mr Trump, who was expected to travel to Dallas, Texas, on Thursday afternoon to talk with law enforcement and small business owners about race relations, did not immediately respond to Gen Milley’s comments.

The president, who is seeking re-election in November, has seen his approval ratings decline sharply in recent weeks over his handling of the antiracism protests following Floyd’s killing by police, as well as the Covid-19 pandemic. Mr Trump’s approval rating fell to 39 per cent, according to Gallup figures published on Wednesday, a 10-point drop from the previous survey.

Joe Biden, the presumptive Democratic presidential nominee who will challenge Mr Trump in November, accused the president on Thursday of “run[ning] away from a meaningful conversation on systemic racism and policy brutality”, and said his trip to Texas “won’t change any of that”.

“President Trump is more interested in photo-ops than offering a healing voice as our nation mourns,” he added.