Highly rated companies including ­Disney, Apple and ExxonMobil have borrowed $1tn in five months as they seek to fortify their balance sheets against the coronavirus-induced economic downturn.

US corporate bond issuance from investment-grade companies — which sit in the top half of the credit-rating table — has crossed $1tn this year, according to data from Refinitiv. That total, which includes debt raised by financial institutions, outpaces the $540bn issued over the same period in 2019, and is closing in on the $1.3tn full-year average over the past five years.

“All the big names decided to come in and build up their war chests,” said Shankar Ramakrishnan, senior bonds editor at Informa Global Markets.

Total issuance topped $200bn for three consecutive months to May — the first time that has happened in data running back to 1990 — as companies used the funds to pay back emergency credit lines and replenish their cash piles after global lockdowns plugged their income streams. 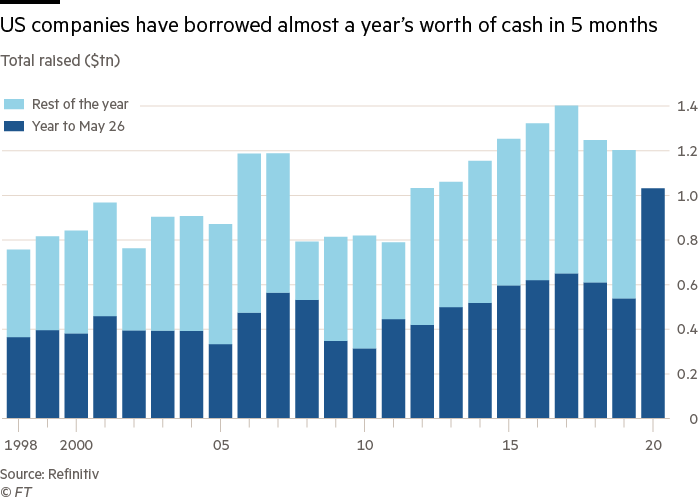 The borrowing spree comes in the face of a significant deterioration in economic conditions because of the Covid-19 crisis, increasing the risk that businesses are unable to repay their debts. But big support packages from central banks across the globe have helped keep conditions stable, and meant that some investment-grade companies even managed to cut their borrowing costs compared with what they had to pay before the pandemic.

The Federal Reserve has cut its target interest rate to between zero and 0.25 per cent, helping drag down the average yield on investment-grade bonds to 2.6 per cent, according to an index run by Ice Data Services. That is below the 2.9 per cent level at which it started the year.

The US central bank is also expected to soon begin buying individual corporate bonds to further support the market, having already ploughed $1.8bn into exchange traded funds that own the debt, according to official Fed data.

Bank of America analysts expect the pace of new bond issuance to slow for the rest of 2020, predicting between $200bn and $300bn over the second half of the year.

“With a reopening global economy, we think US investment-grade companies have built enough of a war chest . . . we expect more normal new issuance activity in June,” the analysts said.

Other banks also said they expect issuance to decelerate. “We are entering a different phase in investment-grade . . . and issuance is clearly slowing from the breakneck pace of April,” said Pete Mason, head of debt capital markets Emea at Barclays.

Issuance of lower-rated, high-yield bonds has run at a gentler pace, notching $123bn so far this year, compared to $99bn over the same period in 2019.