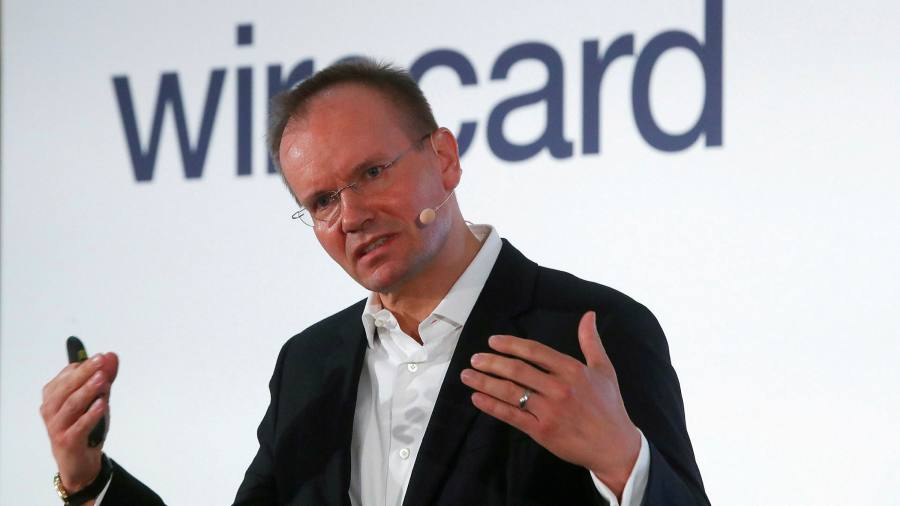 Deka Investment, a top-10 shareholder in Wirecard, has called for the dismissal of chief executive Markus Braun, raising the pressure on chairman Thomas Eichelmann after shares in the German payments group collapsed 38 per cent in a week.

The sell-off, which has wiped more than €5bn from Wirecard’s stock market value, was triggered by the results of KPMG’s special audit into its accounting and business practices.

The Big Four accountancy firm said it could not verify that large parts of Wirecard’s reported revenue were real and disclosed it ran into obstacles during a six-month investigation.

Ingo Speich, Deka’s head of sustainability and corporate governance, told the Financial Times that he called for Mr Braun’s removal in a personal conversation with Mr Eichelmann earlier this week.

“The company owes [Mr Braun] a lot but we don’t think that he is the right person to stabilise Wirecard and overcome the current crisis,” said Mr Speich, adding that the chief executive was “primarily responsible for the massive loss in confidence”.

The KPMG audit was commissioned by Wirecard’s supervisory board last October after the Financial Times reported about whistleblowers’ accusations of accounting fraud.

While KPMG said it found no evidence of fraud, it pointed out it could not verify the existence of certain sales and clients as it lacked the necessary data. It also raised questions over how Wirecard calculated its revenue and cash.

Deka, which holds a 1.4 per cent stake in the company, is the first long-only investor to explicitly call for the chief executive’s dismissal. Frankfurt-based Union Investment, which holds a 4 per cent stake, on Tuesday told the Financial Times that Wirecard “needs an organisational and personal renewal” and called for the appointment of “untainted, external managers to the executive board”.

In an interview with Handelsblatt, Mr Eichelmann last week said a discussion about managerial change “would currently not at all be in the company’s interest”, adding that, “I do not see a removal of Mr Braun at the moment.”

Ousting Mr Braun may be complicated by the fact that he is one of Wirecard’s largest shareholders, holding a stake of more than 7 per cent.

After the KPMG report was published, Mr Braun called it a “big step forward”, adding that there was “not any reason to have even the faintest doubts over account balances”.

Mr Speich said the KPMG report was, in fact, “a disaster” and “the final straw” for Deka, causing it to lose confidence in the CEO. “Mr Braun has been talking down Wirecard’s issues for too long and failed to deliver necessary changes to its organisation and governance,” he said.

Mr Speich called on the supervisory board to act quickly. “Otherwise, the risk is that the crisis spills over on its clients and damages the operating business.”