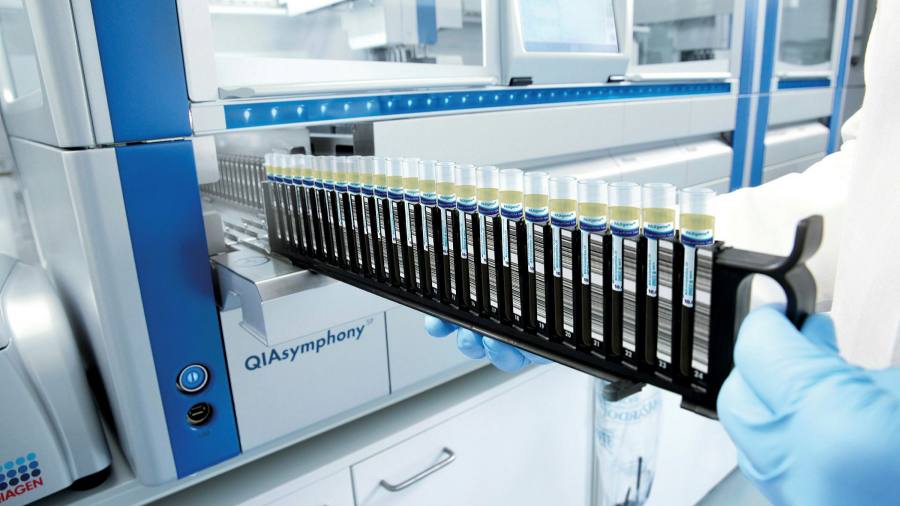 Thermo Fisher has sweetened its offer to buy Qiagen by nearly €1bn, following a surge in demand for its coronavirus-testing equipment that led investors to push the diagnostics-maker to secure a higher takeover bid.

The revised, all-cash deal unveiled on Thursday will see the US scientific equipment maker pay €43 per share to acquire Dutch-headquartered Qiagen. That is an increase of 10.2 per cent from the €39 per share price agreed in early March.

It is unclear if the new deal will gain the support of hedge funds who have built stakes in Qiagen’s shares in recent months and demanded a higher takeover price. The revised offer still falls short of the €50 per share price that US hedge fund Davidson Kempner said Qiagen would reach if it remained a standalone company.

Thermo Fisher appears to have taken steps to reduce the chances that a deal will fall through. Under the new agreement, it has reduced the minimum threshold of Qiagen shareholders who need to vote in favour of the transaction to 66.7 per cent from 75 per cent.

Should Qiagen investors not approve the deal, the company is now liable to pay $95m to Thermo Fisher in what was described as an “expense reimbursement” fee.

Qiagen’s supervisory and management boards said they unanimously supported the new terms, urging shareholders to vote in favour of a tie-up.

Thierry Bernard, Qiagen chief executive, said: “The rationale for this strategic step is stronger than ever, especially as the value of molecular testing becomes ever more evident.”

Marc Casper, chairman and CEO of Thermo Fisher, said: “Both of our companies are playing important roles in helping customers to battle the Covid-19 pandemic. After careful consideration, we’ve decided to increase our offer for Qiagen to reflect the fair value of the business given the current environment.”

Frankfurt-listed shares in Qiagen, which has a large operational presence in Germany, climbed 2.7 per cent to €41.81. The new agreement values Qiagen’s equity at €9.81bn. It has net debt of €878m.

Last week, an arm of Davidson Kempner called Thermo Fisher’s first offer “wholly inadequate,” saying it had failed to take into account the impact of the pandemic in its calculations.

In its preliminary results for the second quarter, Qiagen said net sales were up almost 20 per cent from the same period last year, driven by the “unprecedented demand” for its coronavirus-related products, which has offset weaker sales among its other divisions.