With just 25 minutes until showtime, it’s touch and go whether the enormous inflatable screen at the end of the parking lot will rise to the occasion. Tonight’s showing of Disney’s Moana — a four-year-old movie, but who cares — is hanging in the balance.

Cars filter into the lot. “Living the dream, I guess,” says the masked woman on the gate when I ask how she is. This site is usually home to the San Mateo County Fair, cancelled this year due to coronavirus. Organisers are instead hosting a number of drive-in movie nights to make use of the plentiful space, keep some income coming in, and offer a safe, distanced night out in a city where those are very few and far between.

By the time I was born in the late 1980s, the vast majority of America’s drive-ins had closed. But I’ve seen them in the movies. They provoke a kind of second-hand nostalgia, soundtracked in my head by the Beach Boys. 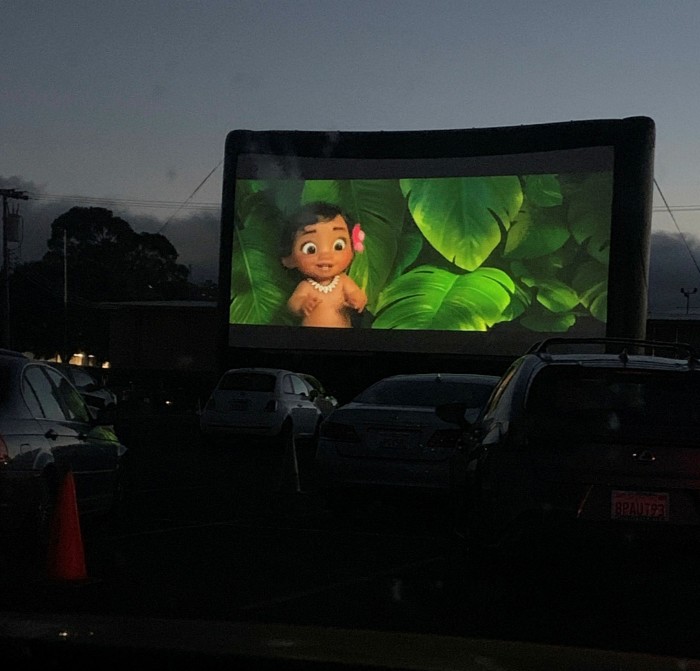 ‘Moana’ playing at the San Mateo drive-in this month: ‘A four-year-old movie, but who cares?’

For the children here — and there’s plenty of them — it’s an even more alien experience: the chance to be glued to a screen that isn’t in their hands. “It’s going to blow some of these kids’ minds,” said Kletra Newton, one of the organisers, announcing the plan on local radio. “Because this will be their first experience with it, and that is going to be awesome.”

This scene is being repeated all over the country.

“This is something that our community has not seen in a long time,” said Ayana Stafford-Morris, a film-maker who, with her husband Siree Morris, cleared out the site of a demolished baseball stadium in Newark, New Jersey, setting up a 385-car theatre that opened last week. “It was a forgotten experience, you know. People forgot how cool it is.”

From now until October, Walmart is planning to host more than 300 showings at 160 of its parking lots across the country. Tribeca Enterprises, hosts of the annual film festival, have set up four locations to host more than 30 screenings of classic movies, with additional showings for essential workers and first responders.

Faced with no better option, other forms of entertainment are moving into the drive-in format as well, with mixed results. Country singer Garth Brooks, who had to postpone his 2020 tour, recorded a one-off performance that was later shown at about 300 theatres across North America. Tickets were $100 per car. “If this is what the future of ‘concert-going’ looks like, go ahead and count me out,” read a review in the Charlotte Observer.

And last Sunday, American comedian Jim Gaffigan performed to a New Jersey parking lot of 1,000 cars. “Was it ideal? No,” he told CBS News afterwards. “Were the laughs as loud? Definitely not. But it was a show.”

The drive-in movie theatre was at the very heart of America’s boldest cultural era — when Cadillacs roared down Main Street and the kids ate at a cool new joint named McDonald’s.

New Jersey businessman Richard Hollingshead was the first to patent the concept. In 1933, he placed a Kodak projector on to the hood of his car and invited people to drive up rather than sit in cramped theatres. Drive-ins were comparatively enormous: a 1957 edition of Popular Science magazine detailed the 28-acre Johnny All Weather Drive-In in Copiague, near New York City, which on a busy night would host 2,500 cars. Its popularity, the magazine offered, was down to a “mass move to Suburbia, more autos, and a shortage of babysitters”. For those not in need of childcare, the drive-in provided an affordable, not to mention cosy, date night.

In 2020, wandering around the drive-in like a forlorn John Travolta in ‘Grease’ is out of the question

Many locations, particularly in the segregated south, became a flash point for the civil rights movement. Black movie-goers, often barred from indoor movie theatres, or forced into the indignity of entering via a back entrance, started visiting drive-in theatres before the Jim Crow laws could adapt.

“Negroes flock to the open-air theatres,” observed Variety magazine, in 1949, “which are generally deluxe affairs as compared to the second rate flickeries generally available to them.”

One man who campaigned against those “second rate flickeries” was congressman and civil rights pioneer John Lewis. Fitting, then, that on the night of his death last week, a drive-in in Brooklyn aired a documentary celebrating his life’s work — the timing a sad coincidence.

As the years went by, the drive-in movie theatre fell into irrelevance. First, the energy crisis of the 1970s had Americans downsizing their cars, making drive-in visits less comfortable. By the 80s, drive-ins were vying
for attention alongside the new, exciting possibilities for home movie rental
on VHS.

In 1961, a detective checks that teen viewers are behaving themselves  © LIFE Images Collection/Getty Images

In a desperate bid to save lost revenues, drive-ins turned to shock value, showing slasher horror movies and other less-family friendly shows. Some theatres took it a step further: the Sonomarin Adult Drive-In, in the heart of northern California’s wine country, showed pornography up until its closure in 1989. The screen, visible from Highway 101, thankfully faced away from the flow of traffic.

Past the turn of the millennium, many of the remaining drive-ins were dealt a fatal blow when major movie studios started to distribute their movies in digital formats only — forcing theatres to invest tens of thousands of dollars to convert their equipment if they wanted to show the latest titles. Many couldn’t afford it and bowed out.

Ultimately, the land on which drive-in movie theatres existed became more valuable as something — almost literally anything — else. On the site of Johnny All Weather now stands a Target, a Home Depot and a Tesla charging station.

Today’s drive-in revival will probably only last as long as the pandemic, with many of the new locations only a temporary novelty. Twenty miles south of San Francisco, San Mateo is one of the several small, rather indistinct cities that make up Silicon Valley. After what was a successful period in lockdown, a resurgence in cases means the city looks set to follow much of the state in rolling back some efforts to reopen.

“It’s a sell-out!” says the attendant at the fairground, guiding cars into alternate spaces, separating them out like draughts pieces to make sure
each car has a good line of sight to the screen — which, after much flailing about, eventually and triumphantly springs to life.

An Epson logo briefly flashes up, followed by a screen telling the audience to dial their radios to 92.1FM in order to hear the movie. It works, albeit with a distracting low hum that never went away.

I suspect we’re not quite getting the 1950s drive-in experience. In 2020, wandering around the drive-in like a forlorn John Travolta in Grease is strictly out of the question. In a list of rules sent via email before the movie, customers are told masks are mandatory when outside of your car. Even then, you can’t move from your allotted parking space unless it’s for the restroom or an emergency. There are limited concessions available — no popcorn. And customers mustn’t sit on the roof of the car.

It’s not long into the picture when the fussiness of the modern car starts to become an issue. On-board computers start to panic that their owners have left their keys behind, or left the radio on by mistake. The ensuing beeps, flashes and honks are the drive-in’s equivalent of the wrapper rustler and incessant whisperer. Headlights are accidentally left on during the movie, and accidentally left off as people drive home.

As the film begins, two young girls, who look and act like sisters, decide to get a better view by sticking their heads out of the sunroof, only to later retreat — it’s northern California, after all; the fog has rolled over the mountains, bringing in the evening chill.

What’s left is a feeling of isolation not all that different to being stuck at home — though with a touch of optimism, at least: buying a ticket to tonight’s movie gets you free entry to next year’s county fair, when all of this will surely be behind us.