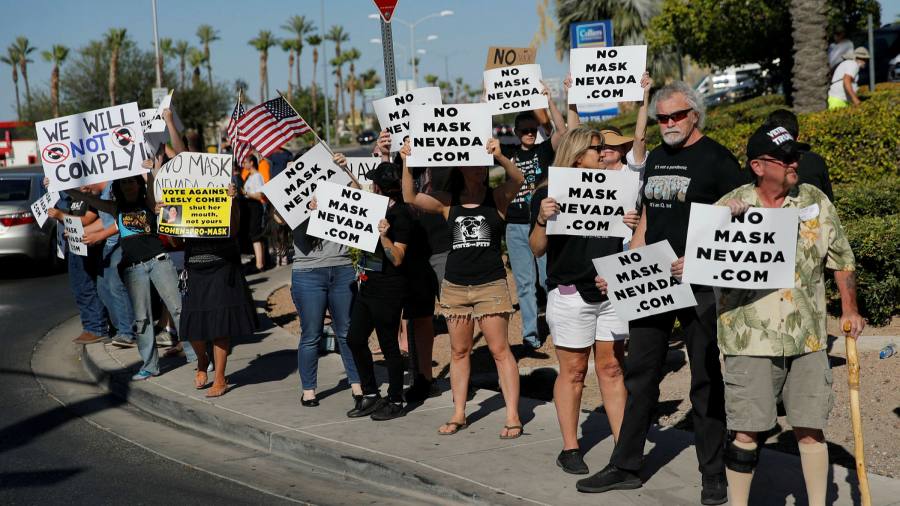 It takes effort to recapture how Ronald Reagan and Margaret Thatcher in the 1980s hastened the demise of the Soviet Union. Images of that triumphal moment are as fresh as yesterday. The atmospherics smell of another era. Yet it is worth the effort.

America and Britain’s poor responses to Covid-19 can be traced partly to post-cold war self-congratulation — the belief that neither had much to learn from the rest of the world. In a few short months a microbe has exposed the underside to Anglo-American hubris. It could take far longer to undo the pandemic’s damage to their brands.

The tale is best captured graphically. With the exception of Sweden, continental Europe succeeded in May in flattening its infection curve. Its countries have been taking measured steps to keep it flat. Most of east Asia had already achieved that in April.

In America the curve was never beaten, yet half the country has given up trying. Britain eventually flattened its curve in June having reached the second-highest mortality rate in the world (America is seventh and climbing). As is often its wont, Britain deployed Churchillian rhetoric to rally the public against Covid-19. In reality, the UK is now throwing caution to the winds on the beaches, on the streets and on the landing grounds.

Corporate brands take years to build but can be broken in short order. The national brands of America and Britain are the product of centuries. Self-belief gives them a greater appetite for risk than found in non-anglophone democracies such as Germany, Spain, France, Japan or Italy. But it is producing worse outcomes. Each of the latter have living memory of defeat, occupation, revolution and failure.

National identity is what separates the US and UK from other English-speaking democracies. Australia and New Zealand, which have been models of competence against Covid-19, are relatively young nations that struggled until recently to shed their “cultural cringe” to mother England. Canada’s self-image is bound up with not being America.

The pandemic record of these three English-speaking democracies belies the notion that “Anglo-Saxon cultures” are too individualistic to stick to social distancing. If New Zealanders and Australians can wear masks, so could Americans and British. Ignoring common sense never used to be an anglophone stereotype. What separates the US and the UK from other democracies is extravagant self-belief. Half a millennium of potted history tells Anglo-Americans they are destined always to be on the winning side. It blinds both to how the rest of the world increasingly views them, which is with sadness and growing mockery.

After pride comes the fall. What is the remedy? Just as humans can learn from their mistakes, nations can recover from episodes of overconfidence. Some scholars have likened America and Britain’s premature relaxation of social distancing to a failure of Stanford University’s marshmallow test. Five-year-olds were offered the choice between one marshmallow now or two marshmallows a few minutes later. Most children chose to eat one now. Follow-up studies showed that kids who resisted temptation proved far more successful in their adult lives. Much the same applies to the fate of our pandemic economies.

Societies that have followed guidelines have returned to semi-normal without triggering new waves of infection. Where outbreaks occur, lockdowns are quickly reimposed. Children have gone back to school in Denmark, Germany and other countries that took early lockdown measures. Some, such as Taiwan, did not have to close their schools in the first place. Britain and the US are acting as though there is a trade-off between lockdown and economic growth. In reality, there is a premium to patience. Public health and economic growth are complementary. The more effective the lockdown, the more confidently you can reopen your economy.

That is what comes from observing other countries. Donald Trump is calling for America’s schools to reopen now. Yet he dismisses the benefits of testing, contact tracing and social distancing — all of which would make it safe to reopen sooner. Boris Johnson’s signalling is little better. British pubs are teeming again. Wearing masks is not routine. Testing remains expensive. Neither leader can resist the marshmallow now. I do not know whether Mr Trump and Mr Johnson are unable to understand best practice, or if they are wilfully ignoring it. The outcome is just as bad.

The US and Britain are abandoning habits that once made them objects of envy. Chief among these was common sense.