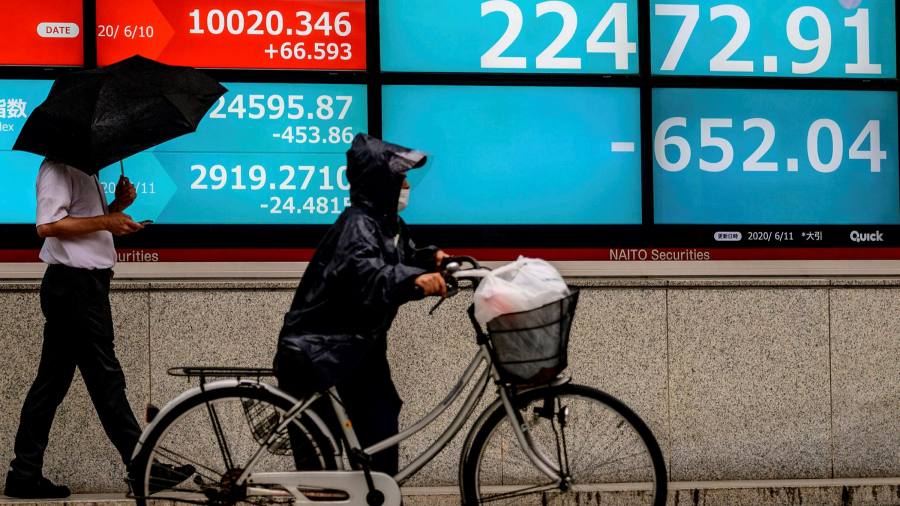 Global stocks fell sharply on Monday after a jump in new coronavirus infections in the US and China stoked investor concerns over the economic impact of the pandemic.

European markets and US futures opened the week with significant declines, following broad losses in Asia.

A wave of volatility has swept through equity markets over the past week as signs of a quickening in the rise of Covid-19 infections threaten hopes for a rapid economic recovery as lockdowns are eased. The S&P 500 tumbled nearly 6 per cent on Thursday before staging a partial recovery the following session.

Monday’s losses came after almost 80 new coronavirus infections were recorded in Beijing over the weekend, many linked to a fresh seafood and vegetable wholesale market. Until the latest outbreak, the city had gone more than 50 days without a new case and the development has prompted concerns over a second wave of infections in the Chinese capital.

“Fragile market sentiment has been challenged further by reports of a fresh outbreak in China over the weekend,” said Lee Hardman, an analyst at MUFG.

The potential for a new wave in China, where the virus originated, has raised the prospect of new lockdowns, which could derail the country’s halting economic recovery. China’s National Bureau of Statistics said on Monday that industrial production in May rose 4.4 per cent year on year, higher than the month before but still below some analysts’ expectations.

Betty Wang, senior China economist at ANZ, said: “The recovery remains quite moderate with a slow improvement in the jobless rate and amid risks of a second wave of coronavirus infections.”

Equity markets — which have staged a powerful rally in recent weeks — have also been unsettled by a jump in US coronavirus cases. Covid-19 infections increased by more than 25,000 over the weekend, with states including Texas and Florida reporting record rises after reopening their economies.

More than 2m people have tested positive for Covid-19 in the US, the most of any country. More than 100,000 have died of the virus.

“At a global level, this talk of ‘second waves’ is misplaced, as daily new cases have been rising steadily since early May,” said Robert Carnell, head of research for Asia-Pacific at ING. “Also, if globally, we are still in wave one, then it is possible that without a vaccine, the big wave is still lying out there somewhere waiting to hit.”

Investors moved into the safety of government bonds, sending their yield lower. The yield on the US 10-year Treasury, viewed by investors as a haven during times of uncertainty, fell 0.041 percentage points to 0.6576 per cent.

Oil prices also fell with Brent crude, the international benchmark, down 3.3 per cent to $37.50 a barrel. US marker West Texas Intermediate was down 4.6 per cent at $34.60.