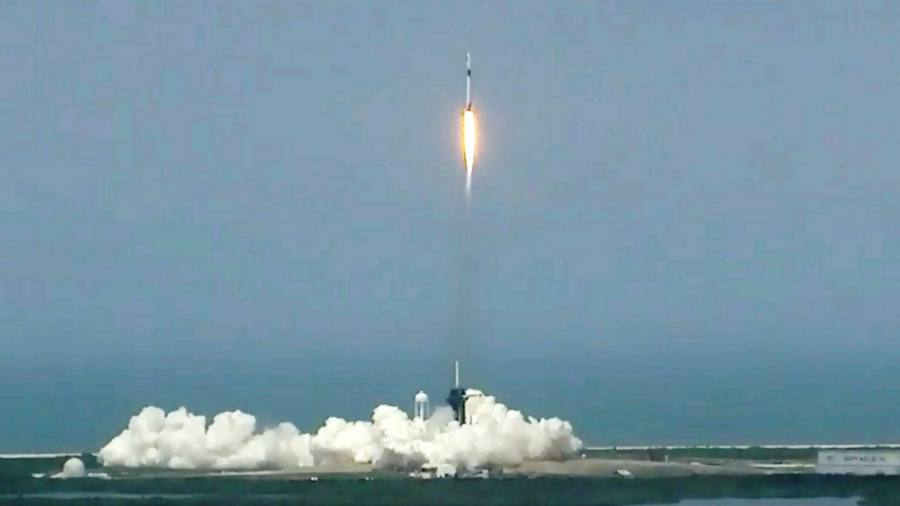 Elon Musk’s SpaceX has become the first private company to launch humans into orbit, after unsettled weather over the Kennedy Space Center in Florida cleared for long enough on Saturday afternoon to allow a second launch attempt to go ahead.

Nasa astronauts Bob Behnken and Doug Hurley became the first to fly in SpaceX’s Crew Dragon capsule, carried on top of one of the company’s Falcon 9 rockets towards a planned rendezvous with the International Space Station.

The launch, at 3.22pm local time, also marked the first time astronauts had been launched into orbit from US soil since the Space Shuttle programme ended in 2011. An earlier attempt on Wednesday was called off because of stormy conditions at launch time.

President Donald Trump and vice-president Mike Pence both made the trip to Florida for a second time in three days to witness the launch, as national attention switched briefly away from protests on the streets of Minneapolis. Presidential historian Douglas Brinkley compared the moment to the 1960s, when the country notched up a series of breakthroughs in space exploration during a period of domestic social upheaval. The SpaceX launch was a “morale boost” for the country after the unrest of recent days, he told CNN.

The Crew Dragon capsule is due to dock with the ISS some 19 hours after launch, where the astronauts will spend up to 119 days before attempting a return to earth for a splashdown landing at sea. If the test is successful, Nasa plans to send paying passengers on the SpaceX craft for the first time on August 30.

The agency was forced to turn to private companies to launch its astronauts into space after its own planned successor to the Space Shuttle was called off by the Obama White House. Since 2011, it has had to buy seats on Russian Soyuz rockets to reach the ISS, dealing a blow to the country’s self-image as the most advanced space power.

SpaceX has now become the first to complete a manned test of a privately developed and operated craft. Boeing, which was also awarded a contract under Nasa’s Commercial Crew programme, suffered technical problems during an unmanned test of its own craft earlier this year.

The use of private spacecraft is expected to bring down the cost of manned space flight as commercial incentives replace the traditional cost-plus development programmes Nasa has relied on in the past. Some experts predict the cost of launching an astronaut into orbit could fall to less than $10m over the next decade, far lower than the price of more than $90m that Nasa has had to pay for its most recent trips on Russian rockets.

The SpaceX launch is seen in the private space industry as an important step in the commercialisation of low earth orbit, the region up to 1,200 kms above the earth where the ISS and most satellites are located. The first customers for private space flight are expected to be other national governments looking to create their own manned space programmes. Space tourism is also expected to become far more common if prices fall as much as some predict.

Jeff Bezos’ Blue Origin and Sir Richard Branson’s Virgin Galactic both hope to begin their own flights for space tourists soon, though for now their companies are only planning brief trips into zero gravity, rather than sending passengers high enough to reach orbit.

Mr Musk and Mr Bezos both also play a key role in the White House’s hopes of putting Americans back on the moon. Their private space companies are among those that have been commissioned to look into building a moon lander as part of the proposed mission. Mr Trump has pushed Nasa to return to the moon before the end of 2024, potentially within a second Trump presidential term, though few space experts believe the timetable is realistic.