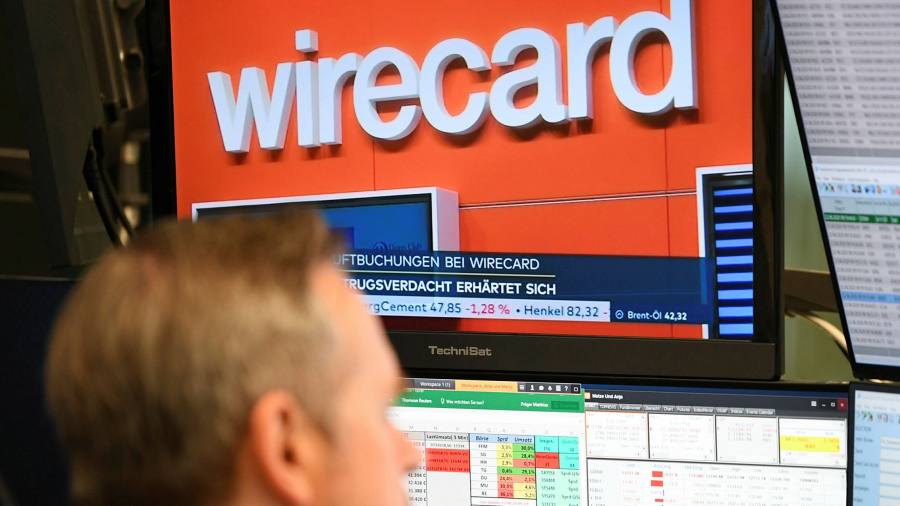 The collapse in Wirecard’s share price has wiped out hundreds of millions of dollars of paper profits for a group of SoftBank executives and an Abu Dhabi sovereign wealth fund, who earlier stood to gain handsomely from an intricate $1bn bet on the German payments company’s stock.

Once one of Europe’s most valuable technology companies, Wirecard is now fighting for survival after last week revealing that forged balance confirmations may have been presented to its auditor EY, leaving a €1.9bn hole in its balance sheet from cash that probably never existed.

Wirecard’s shares have crashed more than 80 per cent over three trading days and could now be wiped out completely, undermining a complicated and controversial trade in the company’s stock that a unit of SoftBank executed last year. That deal was previously set to enrich a select few of the Japanese technology conglomerate’s senior executives as well as Abu Dhabi’s Mubadala fund.

SoftBank Investment Advisers, which manages the group’s $100bn Vision Fund, last year structured a €900m investment in Wirecard through a convertible bond, providing a vital vote of confidence in the Aschheim-based company immediately after a series of reports in the Financial Times raised serious doubts about the validity of its accounting.

At the same time, SoftBank also announced it would pursue a “strategic co-operation agreement” with Wirecard in April 2019, presenting the impression that one of the world’s most powerful technology investors was forging a deep business relationship with the German company and inspiring confidence in its shares.

But the day after SoftBank formally signed the strategic tie-up with Wirecard in September, SBIA cut its exposure to the German payments firm through a sale of new bonds exchangeable for the payments company’s stock.

Bankers at Credit Suisse sold the €900m debt instrument to a broad group of investors, which essentially allowed SBIA to fund its entire investment without putting in a cent of its own money, while also gaining tens of millions of upfront cash profits.

And the strong rally in Wirecard’s shares since the terms of the investment were initially struck in April meant that, on top of this, SBIA retained exposure to shares then worth €450m, while even being able to profit on a further, larger stake up to a certain share price cap.

While Wirecard said it used €340m of the deal’s proceeds to pay down debt, it set aside €200m to buy back stock and further boost its share price. The remainder of the €900m raised was earmarked for investment in what the company called “innovative payment and financial services”.

The so-called “structured equity” trade was the brainchild of Akshay Naheta, a former Deutsche Bank trader and close ally of Rajeev Misra, who also worked at the German bank and now heads the Vision Fund from London.

At the time, a senior SoftBank executive told the Financial Times that the Wirecard trade was inspired by Warren Buffett, who has a record of making highly structured investments in seemingly troubled companies that then benefit from his reputation.

However, the investment was not funded by SoftBank, but rather by individual employees at the Japanese group — including Mr Misra and Mr Naheta — as well as Abu Dhabi’s sovereign wealth fund Mubadala.

“While we took the unproven allegations of financial irregularities seriously, we had no reason to believe there was fraud and we strongly pushed the company to initiate the independent audit that uncovered it,” SoftBank Investment Advisers told the Financial Times on Monday.

Despite the controversy around the investment, there is no suggestion it was unlawful.

On Thursday, Mr Naheta lashed out at Wirecard’s auditors EY.

“I’m totally baffled by the lack of competence and responsibility displayed by E&Y,” he wrote on Twitter. “As an organisation that is meant to protect all stakeholders — creditors and shareholders — in companies, both public and private, they have materially failed in their fiduciary duties.”

Earlier this year, the FT reported that Mr Misra had lined up billions of dollars in funding to expand the SBIA fund through which the Wirecard investment was made, with plans for Mr Naheta to run the investment vehicle from Abu Dhabi and carry out similar complicated trades in publicly listed companies.

But in recent months the plans have been scrapped, with Mr Naheta assigned a new executive role at SoftBank Group, the holding company that sits above the sprawling conglomerate’s various interests.

While the SBIA fund now looks set to miss out on the hundreds of millions of euros profit it could have booked on the Wirecard trade, the financial engineering it carried out last year fully protected its initial €900m investment

Instead, Credit Suisse’s clients are wearing huge losses, with the exchangeable bond the Swiss bank sold to investors quoted at 13 cents on the euro on Monday. Credit Suisse declined to comment.

“We have information indicating that spurious or falsified balance confirmations have been provided in relation to these accounts. Accordingly, we reported these matters to the Wirecard management and supervisory boards. Our audit work is ongoing and we have no further comment at this time.”