Shares in the workplace messaging app Slack tumbled 15 per cent in after-market trading on Thursday as the company revealed that the global shift to working from home had barely lifted its revenue growth rate from before the crisis.

The San Francisco-based group has been seen as one of the main winners from the new dependence on communications and collaboration software to keep companies running. Its latest quarterly earnings came two days after the video conferencing app Zoom reported booming demand, including from corporate customers, raising hopes for Slack’s own performance.

Stewart Butterfield, chief executive, said the more complex nature of the Slack service had made it “a harder lift” for customers to adopt when compared with Zoom, a simple video conferencing app. He claimed, though, that new customers were unlikely to drop the service, and Slack was not expecting to see an increase in its churn rate as more people returned to working in an office.

The Slack messaging app was not primarily designed to help workers connect remotely, but rather to increase collaboration among teams. That has made it a less direct beneficiary of the crisis than Zoom, which this week reported a 169 per cent revenue jump from the year before.

Many on Wall Street had nonetheless been hoping a jump in Slack’s user numbers would “convert to huge gains in revenue in the same way as Zoom”, said Angela Ashenden, an analyst at CCS Insight. The different nature of the services made Slack “a slower burn”, she said. “One of the biggest challenges for Slack is that its growth is slowing, and the market is spooked by that from such a newly public company.” 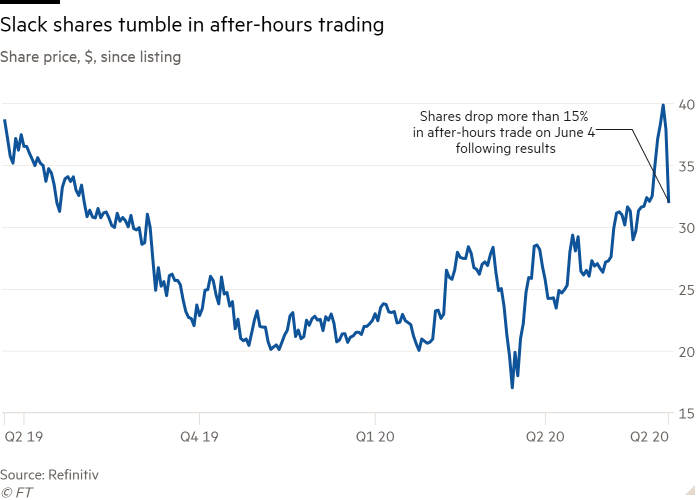 Mr Butterfield said the shift to working from home was of “generational magnitude” in reshaping working practices, changing the outlook for companies such as Slack. He also said the company had picked up a record 12,000 net new paid customers in the latest quarter, taking the total to 122,000.

Microsoft’s Teams has benefited during the crisis partly because of its integration with the company’s video and other communication services, which have been in demand by remote workers. However, the Slack chief executive ruled out the idea of the company creating a rival video service of its own. Its messaging app was designed to be used in conjunction with customers’ existing software, meaning Slack would not win new customers or see other benefits from launching an in-house video service, Mr Butterfield said.

In a sign of how competition has been forcing a realignment in the software world, Slack announced a deepening of its strategic relationship with Amazon, Microsoft’s arch-rival in cloud computing. Amazon will adopt Slack for its own workers and also integrate with applications offered by Amazon Web Services, including its own Chime communications service, the companies said.

Before the latest earnings were announced, Slack’s shares had more than doubled from a mid-March low. Earlier this week they had finally recovered to trade for the first time above their level when the company came to Wall Street with a direct listing a year ago.

Slack reported that revenue rose 50 per cent to $201.7m in the three months to the end of April, a slight increase from 49 per cent growth in the quarter to the end of January. The company forecast revenue of $206m-209m for the second quarter, compared to the $200m analysts have been forecasting. Slack reported a pro forma loss of 2 cents a share in the quarter, compared to the 6 cents analysts had been expecting.