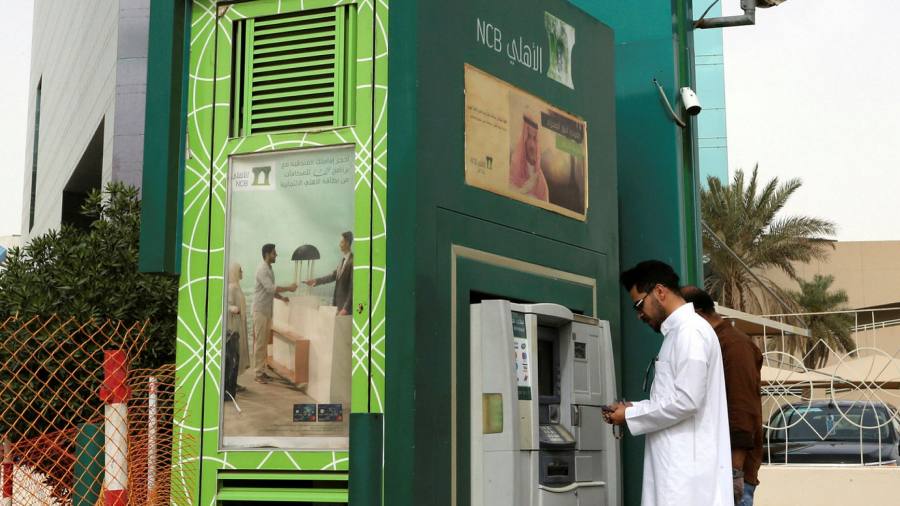 Saudi Arabia’s National Commercial Bank is in talks to acquire Samba Financial Group for up to $15.6bn in a merger that would create the oil-rich Gulf’s third-biggest lender by assets.

NCB, the kingdom’s largest bank with a market value of almost $30bn, said in a statement to the stock market that it had signed an initial agreement with Samba to create a combined entity with almost $214bn in assets. Under the proposed stock deal, it has agreed to pay a premium of between 19.2 per cent and 27.5 per cent for Samba, which is among Saudi Arabia’s top five largest banks.

The merger is a sign that Riyadh is pushing ahead with the consolidation of its banking sector as the kingdom grapples with the twin shocks of the coronavirus pandemic and a slump in oil prices. The IMF forecasts that the economy in the world’s top oil exporter will contract 6.8 per cent this year.

“This is not a Covid-driven deal, these two banks are two of the most profitable and best capitalised in the kingdom,” said a person familiar with the transaction. “This deal first and foremost has a strong commercial logic of having a big-scale player that becomes more profitable. And on top of that there’s a strong strategic dimension.”

Developing the kingdom’s financial sector is a core part of Crown Prince Mohammed bin Salman’s radical plans to reform the economy and modernise the conservative kingdom. NCB, which is majority owned by state entities, has been identified as being a national champion in the financial sector.

Saudi Arabia’s sovereign wealth fund, the Public Investment Fund, is a major shareholder in both lenders, holding a 44 per cent stake in NCB and 23 per cent of Samba. Two of the kingdom’s pension funds also own stakes in both banks, but government entities can only vote on one side of the deal.

If completed, the merger would create the region’s third-biggest lender by assets after Qatar National Bank and First Abu Dhabi Bank in the UAE.

If they agree on final terms, the Saudi banks intend to conclude the reciprocal due diligence process and sign a definitive agreement within a period of four months, NCB said in its bourse filing on Thursday.

Last year NCB abandoned plans to merge with Riyad Bank, without giving a reason. The deal would have created a lender with about $200bn of assets.

Saudi British Bank, an affiliate of HSBC, in June last year completed its acquisition of Alawwal Bank, which was part-owned by Royal Bank of Scotland Group.

The Saudi Arabian Monetary Agency, the kingdom’s central bank, has in recent months unveiled a $27bn support package to help banks and the private sector cope with the impact of coronavirus on the economy.