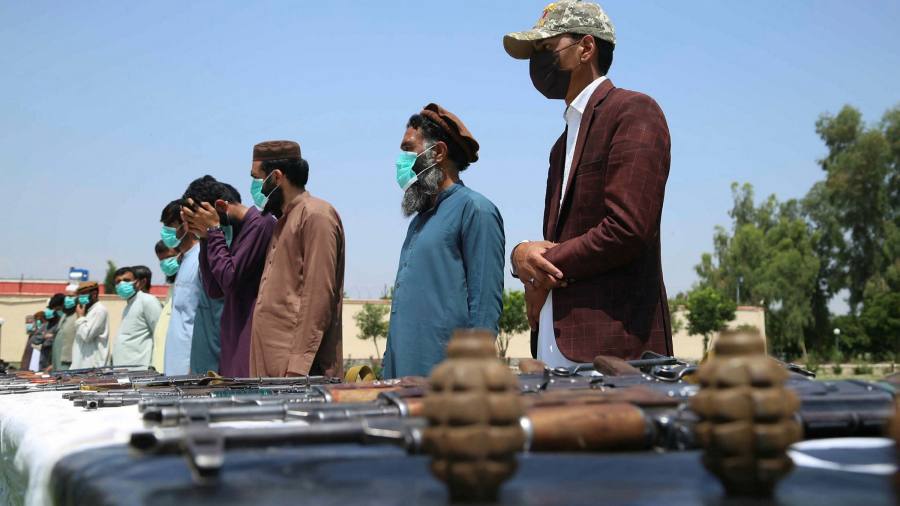 The White House has denied a report that Donald Trump was briefed on a Russian plot to pay militants a bounty to kill US soldiers in Afghanistan.

The allegations, contained in a New York Times report, said US intelligence officials concluded months ago that Russian operatives offered Taliban-linked militants money to target Nato troops in the country, including American and British forces.

It said the intelligence was briefed to Mr Trump and that his National Security Council discussed the problem at an inter-agency meeting in late March, but that British counterparts were told only this week.

“While the White House does not routinely comment on alleged intelligence or internal deliberations, the CIA Director, National Security Advisor, and the Chief of Staff can all confirm that neither the President nor the vice-president were briefed on the alleged Russian bounty intelligence,” White House press secretary Kayleigh McEnany said in a statement on Saturday.

But Ms McEnany stopped short of denying the report about the alleged Russian operation itself, which the NYT said was conducted by an arm of the GRU, Russia’s military intelligence unit, that may have been aimed at destabilising peace talks held last year in a bid to undermine American interests.

“This does not speak to the merit of the alleged intelligence but to the inaccuracy of the New York Times story erroneously suggesting that President Trump was briefed on this matter,” said Ms McEnany.

The Russian foreign ministry denied the claims on Saturday, describing them as “another piece of fake news” and an invention of the American intelligence community. It said US intelligence agencies were riled by a new diplomatic outreach between Moscow and the Taliban.

The CIA and the Pentagon declined to comment. The British embassy in Washington did not immediately answer a request for comment.

US officials spent more than a year negotiating a peace deal between Washington and the Taliban, which was signed in February but has yet to be fully implemented. The Taliban committed to halt violence against US forces and Mr Trump has made US troop withdrawal from Afghanistan, site of America’s longest-running war, one of the key platforms of his foreign policy.

The peace deal foresaw withdrawing all US troops within 14 months of signing the February deal, along with Nato’s 39,000 troops. But the pace of withdrawal remains unclear, and the peace deal has snagged on talks due between the Taliban and the Kabul government.

Michael McCaul, the top Republican on the Democrat-controlled House foreign affairs committee, said the reports, if true, “would only deepen” his grave concerns about Russian president Vladimir Putin’s regime and its impact on global affairs. He cited its invasion of Ukraine, propping up dictators around the world — a reference to Moscow’s support for regimes in Syria and Venezuela — and interfering in both US and European elections.

“If accurate, the Administration must take swift and serious action to hold the Putin regime accountable,” Rep McCaul said of the report in a statement, adding that he had already reached out to the administration.

Mr Trump has frequently been accused of failing to stand up to Russia. In 2018 he broke ranks with his own intelligence community’s assessment that Moscow interfered in the 2016 presidential election by appearing to accept Mr Putin’s denial of any interference.