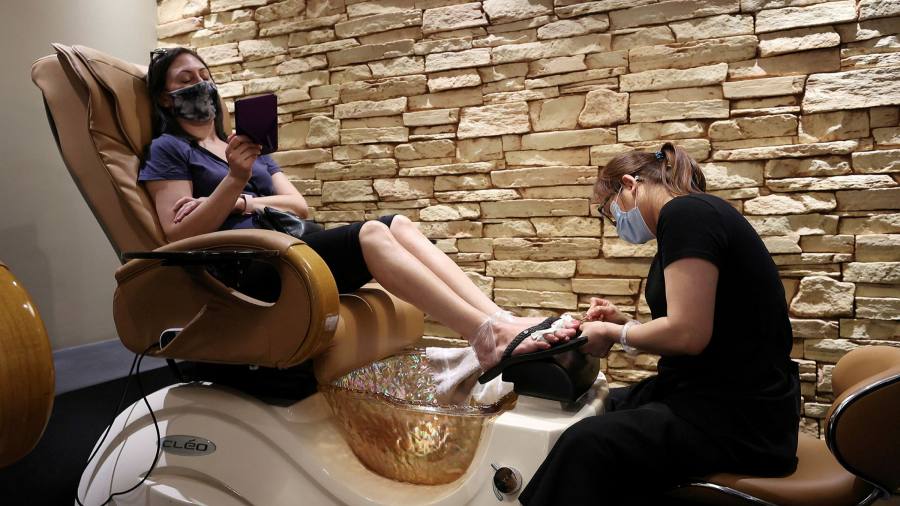 So far, so V. The subtext to UK chancellor Rishi Sunak’s latest £30bn package to protect jobs was that he is gambling on a pretty rapid economic recovery. His measures were certainly bold – and at any other time would seem extraordinary. But a sluggish recovery will require further swift action, to prevent too many people falling through cracks which Covid-19 has brutally exposed.

In previous recessions, those who lost their jobs could trade down to work in coffee shops. This time, low-skilled sectors have been wiped out. This crisis has laid bare the raw underbelly of an economy built on consumption. It is impossible to know how many of the 9m jobs supported by the Treasury’s furlough scheme will vanish when it expires at the end of October. The chancellor, perversely, must be hoping that in November, many of the bonuses he is offering to companies which take back employees will be “deadweight” payments, because normal business has resumed.

You can’t trap people in zombie jobs forever. Their skills fade and they lose the chance to move on to something different. Mr Sunak has recognised, however, that 16 to 24-year-olds are at particular risk of becoming a blighted “Covid generation”. The Treasury’s new “kickstart” scheme will cover the wages of up to 350,000 of them, for six months.

It’s a good idea: a similar scheme in the 2008 financial crisis had a substantial and positive impact on participants’ subsequent chances of finding permanent employment. Today’s version is three times bigger, and will need concerted efforts to set up rapidly. Kathleen Henehan of the Resolution Foundation says that the 2008 scheme took seven months to establish, partly because of the need to prove that the job placements were new and genuine.

Nevertheless, the kickstart project offers an opportunity to get to grips with the long tail of poorly skilled and poorly paid workers which has been a persistent stain on UK society. Successive governments have paid more attention to higher education than to the vocational alternatives. More than half of young people do not take a degree. Across the nation, about 15 per cent of adults are functionally illiterate and 20 per cent are functionally innumerate. Before the crisis, many hopped bleakly between low-paid, insecure jobs in retail and hospitality. But Covid-19 has left nowhere to hide.

If some good is to come of this, it will be in forcing us to think more creatively about what we mean by “skills” and “training”. These are routinely touted as the answer to low productivity and deprivation. But the UK is much better at helping graduates amass letters after their names than working out how to engage the girl who hated school. More than half of workers in UK hospitality, construction and retail don’t have A Levels. Yet many have practical skills and common sense: these qualities matter in a world where advances in artificial intelligence will soon make EQ as important as IQ. And too many parents shun the University Technical Colleges which connect teenagers to the reality of working life.

As part of Mr Sunak’s plan, businesses will be paid to take on apprentices. There has been a decades-long battle to wrench the system round to apprenticeships, fought by professional bodies of lawyers, accountants, nurses and other groups which feared dilution of their power.

Yet in Germany, where apprenticeships are notably longer, vocational routes are given equal status. In England, you can set up as a builder, plumber — or indeed a training provider — almost overnight. In Germany, there are structured training programmes and rigorous criteria. The government must keep its nerve and revive further education colleges as a highway to opportunity, not a place where families fear their children will be shunted into the sidings.

Mr Sunak delivered his summer statement with his trademark combination of hope and honesty. The shadow over his plans is that the economy cannot recover until people feel it is safe to return to normal. At the Bank of England, chief economist Andy Haldane says that experimental data suggest that consumer spending is back to about nine tenths of what it was a year ago. But other indicators suggest that the recovery may not be V-shaped; and Britain may be lagging behind some other rich countries.

The problem is not a cash shortage but fear of the virus, and desire to do the right thing. Seemingly arbitrary rules haven’t helped. You can go to the cinema or sit for hours on an aircraft but not yet in a theatre. You can get your hair done but not your nails until Monday. It’s possible that the male-dominated Treasury did not realise, before announcing a belated opening for the beauty industry, that it is worth almost as much as car manufacturing. Uncertainty over schools and universities returning adds to the fear.

The chancellor can hone his plans: his next statement is due in the autumn, but he has already piled up budgets. He will probably regard it as a success that he has been accused both of not doing enough, and doing too much. His “eat out to help out” vouchers were more deft than they appeared: a sensible way to lure shoppers back to deserted lunchtime high streets. The chief risk remains that 2m people will topple off the cliff edge into joblessness as furloughs end. That would not only dent confidence but dent the exchequer, since employment taxes account for about two-fifths of government revenue. As former chancellor George Osborne liked to accuse his predecessor Gordon Brown of having failed to fix the roof while the sun was shining, in 2020 Mr Sunak is gambling that we will not look back and find out that he was handing round canapés while the roof was caving in.