The pitfalls from the rise in concentration across US stocks became apparent on Tuesday, when a drop among the five biggest companies erased the gains of an otherwise solid day for the broader market.

More than 200 companies in the S&P 500 index advanced at least 1 per cent for the day and nearly three-quarters of the benchmark closed in positive territory. Despite those gains, the index rose just 0.2 per cent, dragged down by the handful of mega-cap stocks at the top of the market.

Apple, Microsoft, Amazon, Alphabet and Facebook — the largest companies in the S&P 500 — all fell, led by Amazon, which slid 1.8 per cent.

The five stocks hold greater sway over the market than during the tech boom of 2000, representing more than a fifth of the blue-chip index — much higher than the 18 per cent peak share of Microsoft, Cisco, General Electric, Intel and ExxonMobil two decades ago. 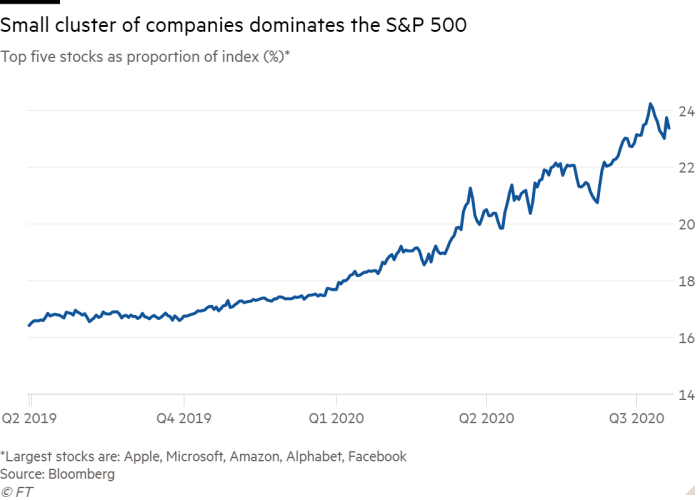 This dominance of a small cluster of companies has begun to unnerve investors. “The concentration concerns me,” said Lee Ferridge, head of macro strategy for North America at State Street Global Markets. “I look at these stocks and wonder how high they can go.”

The five mega-caps have all outperformed the broader market this year as investors have rushed to the safety of large, growth-oriented companies with revenue from online businesses through the pandemic. Amazon, the best performer of the group, is up 70 per cent this year.

The two largest, Apple and Microsoft, fall within the tech sector and have helped fuel its strong performance since the year began. Technology is the biggest sector in the S&P 500 and has gained 15 per cent this year while the broader index is flat.

“It is a top-heavy market,” said Howard Silverblatt, senior index analyst at S&P Dow Jones Indices, which runs the S&P 500.

Microsoft and Apple together represent more than 11 per cent of the S&P 500 — a level of concentration that has not been seen in nearly four decades. In 1982, IBM and AT&T made up a similar proportion of the benchmark, Mr Silverblatt noted.

Some analysts say fears of concentration are overplayed. Jonathan Golub, chief US equity strategist for Credit Suisse, noted that the top five companies captured 14 per cent of the benchmark’s profits — a bigger contribution, relative to market cap, than in 2000 — and were delivering strong earnings growth.

Still, some warn that any turn in tech stocks could weigh heavily on the broader market. One catalyst could be greater regulation for large tech groups that dominate the industries they serve.

A tougher regulatory environment would be an “existential” threat to big tech groups, said Todd Jablonski, chief investment officer for Principal Portfolio Strategies. But he added that for now, the prospect of a determined crackdown seemed remote, as there was no “co-ordinated plan [among policymakers] to execute on a regulatory agenda”.

The result is “there is no better business model than mega-cap tech”, he said. “Cloud computing, media streaming, and the delivery of [consumer] goods are tailor-made models for a life with Covid-19.”