President Donald Trump and his top officials clashed with Democratic leaders in Congress over new stimulus measures to prop up the struggling US economy, as both sides warned that an agreement remained distant.

“As of now we’re very far apart,” Steven Mnuchin, the US Treasury secretary, told reporters on Wednesday morning, suggesting that lawmakers should consider a short-term extension of expiring jobless benefits for millions of Americans to allow time for negotiations.

While the White House and Congress agreed rapidly on an initial $3tn burst of stimulus at the beginning of the coronavirus crisis in March and April, they have struggled to coalesce around a plan for further fiscal support, even after a new surge of infections has rattled some states in recent weeks. House Democrats have passed a bill outlining another $3tn in spending, a plan that Republicans rejected as expensive and poorly targeted.

After weeks of internal tensions, Senate Republicans this week proposed to inject $1tn more in government aid into the economy with the backing of the White House. Their plan was dismissed by Democrats as woefully insufficient.

Negotiations between senior White House officials and congressional leaders intensified this week, as millions of Americans face the expiration of $600 a week in emergency unemployment benefits at the end of this week.

“The attitude from Republicans has been one of condescension and disrespect for America’s working families,” Nancy Pelosi, the Democratic House speaker, told her fellow lawmakers in a letter on Tuesday night.

The biggest sticking point in the talks is the fate of the emergency unemployment benefits, which Democrats want to extend until January. Republicans have offered to cut from $600 a week to $200 a week until September and then calibrate them to replace 70 per cent of lost wages in order to encourage people to return to work.

Another big source of tension is Democrats’ call for more than $900bn in aid to state and local governments. The Republican proposal calls for none.

“The Republicans have unveiled a proposal that would only prolong the suffering for millions of workers and families across America,” Ms Pelosi said in her letter. She even compared reconciling the two stimulus plans to the impossible task of mating “a giraffe and a flamingo” in one of the negotiating sessions with Trump administration officials, according to Politico. 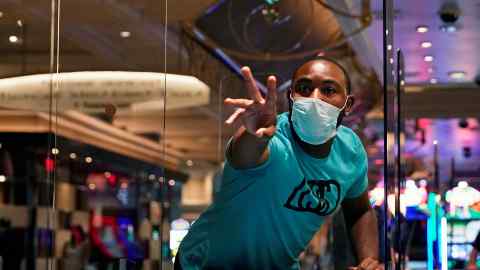 The fate of the stimulus talks is being closely watched by many economists, including at the Federal Reserve, since it could be pivotal to the trajectory of the US recovery as it suffers from a slowdown owing to new waves of infections across the country.

Failure to reach an agreement, or a compromise on a very limited package, could deliver a serious economic setback and plunge the US into a more severe downturn, while a compromise on a substantive package could boost the rebound.

One area where both Republicans and Democrats have agreed is on the need to send a new round of cheques worth up to $1,200 to US individuals — and possibly extend a federal moratorium on evictions for people who cannot pay their rent.