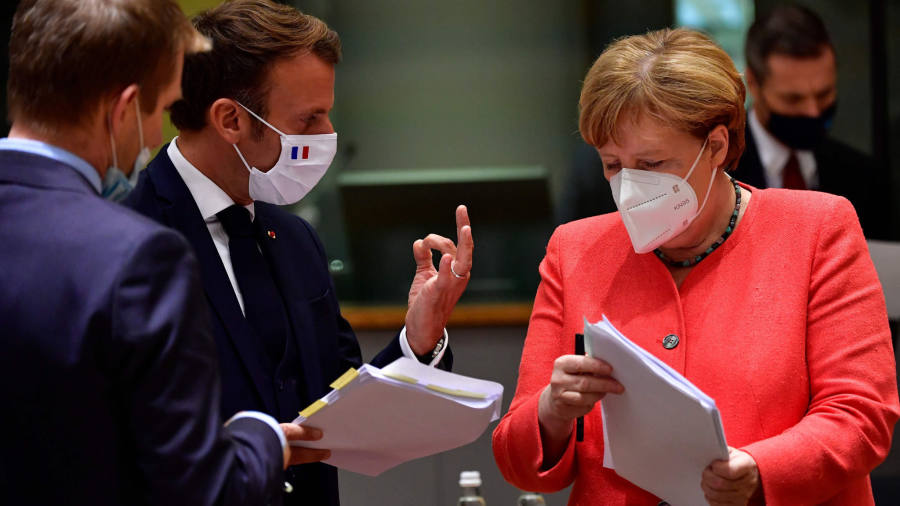 The EU’s agreement on a €750bn recovery fund coupled with a new seven-year €1.074tn budget is a landmark moment in European integration. For the first time, the EU will be able to run a federal deficit to respond to an economic shock. It will raise commonly-issued debt and channel a large part of it in grants to countries most in need of a rebound from the coronavirus economic slump.

The fund is supposed to be temporary. Proposed new EU taxes, starting with one on non-recycled plastic waste, are unlikely to be enough to repay €750bn, let alone finance a permanent facility. It falls well short of fiscal union or a true Hamiltonian moment. Yet in just a few months the EU has embraced emergency fiscal transfers. They will help counter strains in the single market by allowing all governments to support workers and businesses through the recovery. More importantly, they will help underpin monetary union. In terms of market perceptions about the long-term viability of the euro, this deal is a game-changer.

After strong opposition from the “Frugal Four” of the Netherlands, Austria, Sweden and Denmark, the fund’s grant element was scaled back from €500bn to €390bn, which amounts to 3 per cent of EU gross domestic product. But the pot to be allocated to national capitals was preserved, so the fund retains its redistributive character. Spain and Italy could receive about 5 per cent of their GDP over three years.

The money will be allocated without the kind of onerous supervision that poisoned relations between the EU and Greece during its debt crisis. Governments will be expected to draw up their own recovery plans including growth-enhancing measures. If one capital questions another’s commitment to reforms, it can delay disbursements for up to three months and take the issue to EU leaders for debate. It is a recipe for endless arguments at EU summits but at least it is not the national veto over spending plans that the Netherlands had demanded.

The deal provides for a large and timely stimulus but it has come at cost to other parts of the budget which will harm the EU in the longer term. To accommodate the Frugal Four’s insistence on less grant funding, leaders agreed to slash top-up money for research and the green transition which are normally priorities for northern governments. The Frugal Four were also promised much bigger rebates on their budget contributions, a pernicious mechanism that dates back to Margaret Thatcher and has done much to poison discussions about the EU’s budget. By one calculation, France will now have to pay an extra €15bn into the budget because of these increased rebates.

The deal was also bought at the expense of ambiguity on the question of linking EU funds with the rule of law. Leaders agreed a country could be found in breach by a qualified majority vote but the precise design of this mechanism needs the unanimous approval of all EU governments.

Four days of ill-tempered negotiations have revealed the deep divisions in the EU — between north and south and east and west — which too often stymie its common purpose and constrain its capacity for action. But just when the EU seemed almost ungovernable, it pulled off a momentous deal. It is a vindication of Emmanuel Macron’s call for EU boldness. It is testament to the enduring importance of the Franco-German partnership, a necessary if insufficient precondition for progress. Above all it is a tribute to German chancellor Angela Merkel’s recognition of the gravity of the crisis and of the need for a rapid and decisive response.