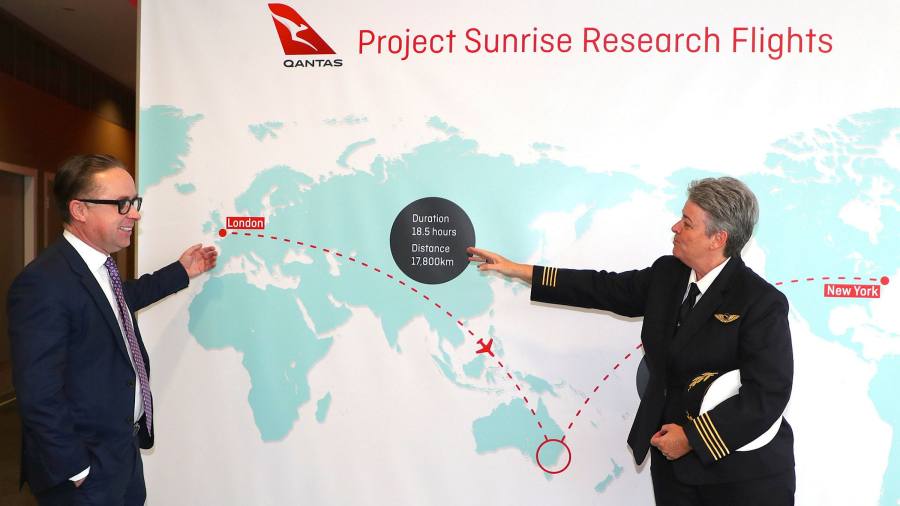 Qantas Airways has shelved plans to launch the longest direct flights in the world and will review its fleet due to the collapse of international travel as a result of the coronavirus outbreak.

Alan Joyce, Qantas chief executive, said on Tuesday the airline was on track to reduce its cash burn rate to A$40m a week by the end of June, which would enable it to last out the pandemic that has grounded most of its flights.

But a full recovery in international travel could take years, he said, which meant the carrier needed to overhaul its operations.

The decision to suspend indefinitely its “Project Sunrise” plan to fly direct from Sydney and Melbourne to European cities and New York is a blow for Qantas, which has invested significant resources in ultra-long-haul travel. It is also disappointing for Airbus, which won the contract to supply modified aircraft for the routes.

“We will be putting Project Sunrise on hold,” said Mr Joyce. “The time is not right now given the impact that Covid-19 has had on world travel. We certainly won’t be ordering aircraft for that this year.”

Qantas had intended to order 12 Airbus A350-1000 aircraft before the end of March to operate the world’s longest commercial direct flights, including the so-called kangaroo route between Australia and the UK. The carrier recently sealed a long-delayed industrial relations agreement with pilots to enable it to begin flying the routes.

Peter Harbison, chairman emeritus of CAPA — Centre for Aviation, a market intelligence group — said the economics of Project Sunrise and ultra-long-haul operations in general may have gone out the window for a long time due to Covid-19.

“Where a little token social separation might work for an hour’s domestic flight, the risks in sitting in the same aircraft for these ultra-long-haul commercial flights would require strenuous health and safety precautions that we haven’t yet worked out,” he said.

Mr Joyce said he was conducting an international fleet review due to the lack of clarity over when a full recovery would happen, and flagged the early retirement of some aircraft.

He also said Qantas would consider selling its 30 per cent stake in lossmaking subsidiary Jetstar Pacific, a low-cost carrier it established with Vietnamese Airlines in 2007.