The number of companies with rock-bottom credit ratings has exceeded the peak of the 2008 financial crisis, fuelled by the demise of debt-laden, private equity-led buyouts.

The total number of companies on the bottom five rungs of Moody’s’ credit ratings ladder, along with those at risk of a downgrade from the rung above, has grown by 213 to 412, marking a more than 40 per cent increase from the depths of the last financial crisis.

Two-thirds of those companies in the lowest reaches of the creditworthiness spectrum — 273 — are backed by private equity groups, suggesting that Wall Street deal makers have laden borrowers with more debt than they can handle.

The rush of downgrades is seen as a harbinger of stress to come, with an increasing number of companies expected to be unable to service their debts as the crisis deepens.

“We fully expect an increase in defaults,” said Chris Padgett, head of leveraged finance at Moody’s, who added that the scale of the deterioration in credit depended on how long the economic and social shutdown lasted. “We’re still in the middle of it . . . we could easily see a default rate similar to the financial crisis.” 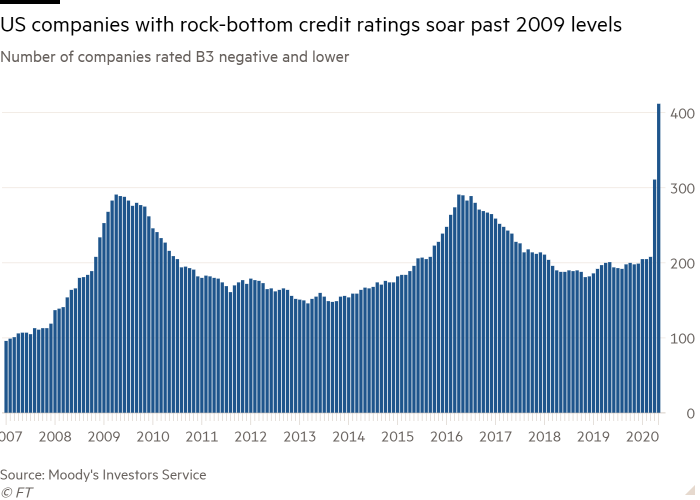 A Moody’s 21-point scale descends from a high point of Aaa to a low of C, typically assigned to companies in default with little prospect of recovery of principal or interest.

There are several notches for each rating band in-between, and companies are considered to be below investment-grade — or “subject to substantial credit risk” — when they reach Ba1, 11 rungs from the bottom. Default is thought to be a more imminent risk once borrowers slip down to Caa1, five from the bottom.

Ms Padgett noted that debt markets entered the current downturn already in worse shape than in previous cycles, with an increasing number of lower rated issuers following a spate of buyouts that left borrowers carrying large amounts of debt compared with their operating profits.

She added that while some companies in sectors such as retail and hospitality were particularly vulnerable because of the nature of social distancing, other companies were at risk simply because they were the product of such aggressively leveraged buyouts.

“They didn’t necessarily have to be in the eye of the storm, but they didn’t have the right balance sheet going into the crisis,” she said.

Downgrades could spell trouble for investors exposed to vehicles known as collateralised loan obligations, which bundle debt from riskier companies to back payments on new bonds with varying exposure to the default of the underlying issuers.

These vehicles have led the expansion of credit for PE-backed takeovers in the leveraged loan market, which has exploded to about $1.2tn outstanding as investors starved of income have been happy to take greater risks.

CLOs typically have triggers on the amount of lower rated loans they can own before repayments are diverted away from investors in the riskier slices of the CLO to pay back investors higher up the pecking order.