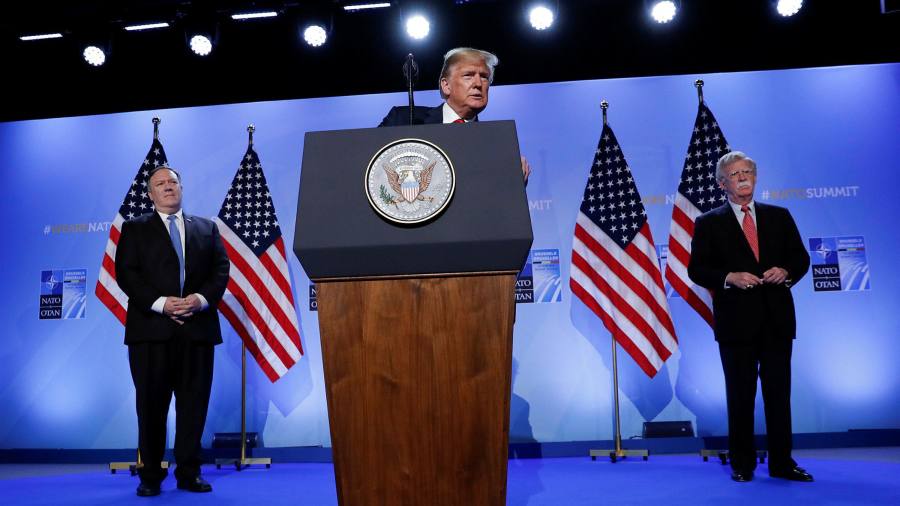 Mike Pompeo, the US secretary of state, has hit out at John Bolton, calling his former colleague a “traitor” and accusing Donald’s Trump’s ex-national security adviser of “lies” in a new memoir.

“John Bolton is spreading a number of lies, fully-spun half-truths and outright falsehoods,” Mr Pompeo said about The Room Where It Happened, Mr Bolton’s book that is scheduled to be released next Tuesday.

In a statement headlined “I was in the room too”, Mr Pompeo said it was “both sad and dangerous that John Bolton’s final public role is that of a traitor who damaged America by violating his sacred trust with its people”.

Mr Bolton, a foreign policy hawk who departed the administration on bad terms with the president, has been slammed by Mr Trump and his supporters after parts of the book were published this week. The president has called the man who served as his national security adviser for 17 months a “sick puppy”.

The Trump administration is trying to block distribution of Mr Bolton’s book. The justice department on Wednesday filed for an emergency restraining order on publication, in a case that will be heard on Friday.

In the book, a copy of which has been obtained by the Financial Times, Mr Bolton writes that Mr Trump was easily manipulated by foreign leaders, including Russian President Vladimir Putin and North Korean dictator Kim Jong Un.

Mr Bolton recalls one incident when Kim Yong Chol, a North Korean official who made an unprecedented visit to the White House, presented Mr Trump with his first letter from Kim Jong Un.

At the time, Mr Trump bragged about the letter to reporters. Mr Bolton says that it was “pure puffery”, adding it was “written probably by some clerk in North Korea’s agitprop bureau, but Trump loved it”.

An advocate of regime change, Mr Bolton writes that Mr Trump was desperate to reach a denuclearisation deal with Mr Kim, but came away from their first summit in Singapore with nothing.

The president told Moon Jae-in, his South Korean counterpart, that the meeting with Mr Kim had been “phenomenal”. But Mr Bolton says that “Singapore had not been ‘phenomenal’ unless you were a North Korean”.

At one point, when preparations for the Singapore summit were going badly, Mr Bolton recalls in his book that Mr Trump suggested he might abandon the summit. “He recounted how with the women he had dated, he never liked to have them break up with him,” he writes, adding: “He always wanted to be the one doing the breaking up.”

Mr Bolton also recounts a serious of contentious international summits that Mr Trump attended, including the G7 in Canada and a Nato meeting in Brussels. He says Mr Trump was impatient at such events and “didn’t really like” Justin Trudeau, the Canadian prime minister, and French President Emmanuel Macron.

“He tolerated them, mockingly crossing swords with them in meetings,” Mr Bolton writes.

Mr Bolton also describes a visit to London, during which Mr Trump embarrassed former prime minister Theresa May by criticising her approach to Brexit.

Mr Bolton, a Brexit supporter, writes that “Brussels was the new George III: a remote . . . unaccountable, oppressive machine that a majority of British voters rejected in 2016”.

He believes the Trump administration should have done more to help the Brexiters but that aside from himself and the president, “almost no one in the administration seemed to care”.