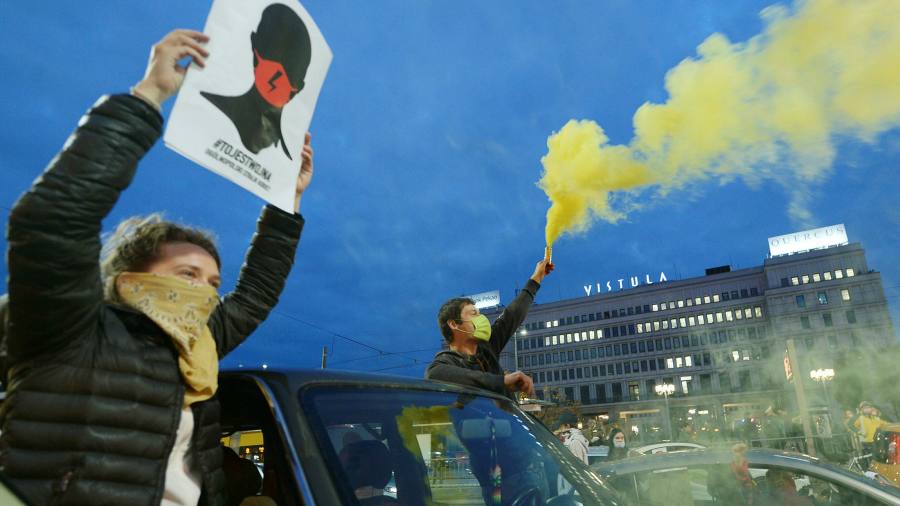 Thousands of Poles took to the streets across the country on Monday for the fifth day of protests against a court ruling that paves the way for an almost total ban on abortion.

Carrying placards with messages such as “You have blood on your hands” and “Fight the virus, not women”, crowds of mainly young protesters blocked roads and roundabouts, bringing parts of several cities, including the capital Warsaw, Krakow, Wroclaw and Szczecin, to a standstill.

“Every woman should have a choice, and it’s just outrageous that one person, or even five, should have the right to decide for all of us,” said Patrycja, who had come to the protest in central Warsaw with her father, holding a placard reading “I am not an incubator.”

“I actually cried when I heard the ruling. I cannot imagine that I or my child would not have the right to decide about their child. It’s tragic.”

The protests were ignited last week after Poland’s Constitutional Tribunal ruled that a 1993 law allowing abortions in cases of severe foetal disabilities was unconstitutional, paving the way for a dramatic tightening of Poland’s abortion laws, which were already among the strictest in the EU.

Once the ruling comes into force, terminations will be allowed only in cases of rape, incest or when the mother’s health or life is under threat. Such cases accounted for just 2.4 per cent of the 1,100 legal abortions that took place in Polish hospitals in 2019.

Since coming to power in 2015, the conservative-nationalist Law and Justice party (PiS) has made promoting traditional, Catholic values a central plank of its political platform.

Over the past 18 months, the party has ratcheted up its rhetoric against LGBT rights movement, and backed away from a previous attempt to tighten Poland’s abortion laws in 2016 only after huge street protests.

Patryk Jaki, an MEP from the ruling camp who has a child with Down syndrome, said that under the existing rules there was a chance of “healthy children” being aborted because “there is rarely 100 per cent certainty” about a foetus’s condition.

“Both healthy and disabled children, apart from their duties, give a lot of joy and build family strength. And through that, a strong Poland,” he wrote on Twitter.

However, women’s rights groups say that the court ruling means that women would be forced to give birth to babies with severe and lethal conditions which have no chance of survival.

Others, such as Iwona Hartwich, an opposition MP with a disabled child, who lead a campaign for greater support for disabled people and their families, accuse PiS of failing the disabled. “[PiS] just promises and does not live up to those promises,” she wrote in an article on Sunday.

As well as inflaming political tensions, the ruling has led to an outpouring of anger against the Catholic church. Over the weekend, pro-abortion slogans and even phone numbers for abortion helplines were daubed on churches, and some services were disrupted by protesters, an almost unprecedented occurrence in what remains one of Europe’s most Catholic countries.

In central Warsaw on Monday night, as protests continued despite a ban on public gatherings introduced to stem the spread of the coronavirus pandemic, groups of nationalists and women’s rights protesters had to be separated by police after a tense stand-off and fights outside a church.

Nearby, the air filled with the blare of car horns and sirens as protesters blocked streets with cars of simply by sitting or lying down on the tarmac.

“I hope it will have an effect, but it seems to me that our government is spitting in our faces anyway, so I don’t know if it will work,” said Claudia, who joined the march through central Warsaw. “But we have to fight for our rights.”