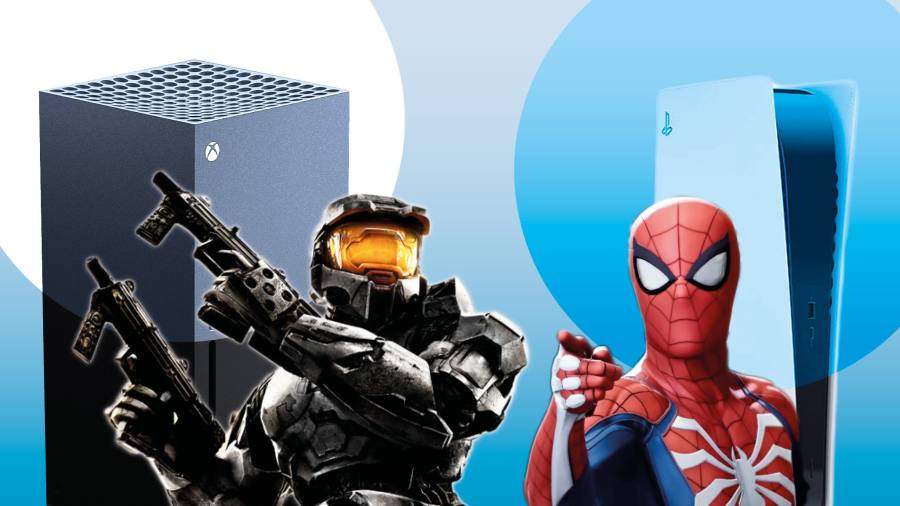 The much-hyped unveiling of the PlayStation 5 last week finally allowed images of Sony’s next-generation games console to be set alongside those of Microsoft’s new Xbox Series X, and for gamer humour to do its worst.

Microsoft’s device, some decided, looked like the kind of granite monolith that might serve as the headquarters of a telemarketing company. Sony’s machine, meanwhile, resembled the offices of a bank trying far too hard to look cool. The jokes and their use of edifice fit the narrative of two corporations planting self-defining new fortresses on the landscape and rallying, once again, for war.

Such a drumbeat is nothing new. Consoles, which have moved from a child’s distraction to the entry point for a $45bn segment of the global entertainment industry, have always lent themselves to metaphors of mortal conflict. When the latest Microsoft and Sony machines officially launch later this year, it will mark the fourth occasion that the two companies have faced off with new devices in almost 20 years of rivalry.

The pre-launch sparring invites speculation and a suspicion that this time must, surely, be different. Will this round finally knock out one of the players? Will some hardware gimmickry, like virtual reality, outshine the games as the principal deciding factor? Are alternative technologies, such as the game-streaming services promised by Google’s Stadia, now moving fast enough to make this the very last console war as we know it?

Analysts — both professional and amateur — are debating these before either company has even announced the prices of their new machines. The damage is thought to come probably in between $400-$500 for the PS5 and a little more for the Series X.

Sony comes into this fight with the larger fan base. The PlayStation 4 has shifted 106m units since its launch in 2013, outselling the Xbox One in a ratio of roughly two to one. But analysis of the hardware suggests that Microsoft’s new machine may be the more powerful.

The question of which platform will arrive with more exclusive, differentiating games is also hotly disputed. Sony’s online event last week featured a parade of the new PS5-only titles — led by the latest incarnation of Spider-Man — that it hopes will compel people to choose its console. The X Series, meanwhile, led with the sixth generation of its Halo series.

The 2020 round of console wars feels qualitatively different from its predecessors in two ways. This one is being launched into what will be Covid-19’s first Christmas. Consumers’ spending decisions are unlikely to follow traditional patterns and they may look more favourably than ever on the escapism of games, broadening the potential customer base. Months of lockdown and fundamental threats to live events, cinema, sport, concerts and other real-life entertainment have triggered speculation that, with some creative dealmaking and partnerships, the consoles could ultimately step in as all-purpose portals.

For the companies behind the consoles, the difference is even greater. With each stage of their evolution, these products have risen in both financial and symbolic importance to their creators. Analysts say games consoles have become progressively clearer barometers of corporate thinking on strategy and risk and their views of the future.

Sony and Microsoft began designing the latest machines in about 2016, with a remit to ensure they remained relevant until at least 2026. But that was before American rapper Travis Scott drew 12m viewers to a concert in April held entirely within the video game Fortnite. The event opened a thrilling line of speculation on what might ultimately be sold or delivered within the games themselves.

The third big company in this business, Nintendo, has always been a games maker. But during the past 20 years, executives at both Sony and Microsoft say, consoles have become more central elements of their respective companies’ idea of what they are and how they want to be positioned as games converge with other forms of entertainment. The May 2019 announcement that the two companies would explore collaboration on cloud gaming was, say analysts, one of the more eye-catching clues that this war is being fought with a very different calculus to the ones that came before.

This time, both companies appear to be pitching game portfolios that appeal across wider spectra of age, gender and expected hours spent gaming. At least two generations of machines ago, Sony invested heavily in its own games studios, giving itself overwhelming superiority in exclusive titles. Between 2018 and 2019, Microsoft acquired six independent studios in a bid to replicate that. Sony bought into music and movies in the late 1980s in a long-term bet on vertical integration that is only just now making sense. It is perfectly conceivable, say bankers, that console makers bent on winning this latest war become even broader consolidators of content production while the industry is in flux.

TVs, laptops, cars and even phones often do not reveal much about what is going on behind the scenes of their producers. But, more than any predecessors, the PS5 and Series X tell you what Microsoft and Sony are thinking when they look into our homes and try to imagine what we are thinking.