It is almost five years since Hillary Clinton sent her $15bn tweet.

Locked in a bruising battle with Bernie Sanders for the Democratic party’s US presidential nomination, Mrs Clinton wiped billions of dollars off the value of America’s drugmakers in late September 2015 by vowing to take on the “outrageous” pricing of certain medicines.

The 89-character warning helped to usher in a period during which the threat of a root-and-branch reform of drug pricing has hung over the US pharmaceuticals industry.

But as America’s politicians struggle to manage the country’s worst public health emergency in decades, drugmakers have seized on the coronavirus pandemic as a rare opportunity to recast the industry’s reputation.

“We went from having been a political piñata in January to a recognition, at least in the minds of many policymakers, that this is an industry that we must support,” said Jeremy Levin, chairman of the industry association BIO and chief executive of Ovid Therapeutics.

Mr Levin pointed to the hundreds of companies that have started work on Covid-19 vaccines and antivirals, proving the industry was committed to action while the US government has been slow.

Wall Street’s verdict is clear: the industry is a winner from the crisis.

The S&P 500 pharmaceuticals, biotech and life sciences index has outperformed the broader S&P 500 index this year, while the Nasdaq biotech index has done the same. Among the biggest winners are those businesses directly involved in developing a potential treatment or vaccine. 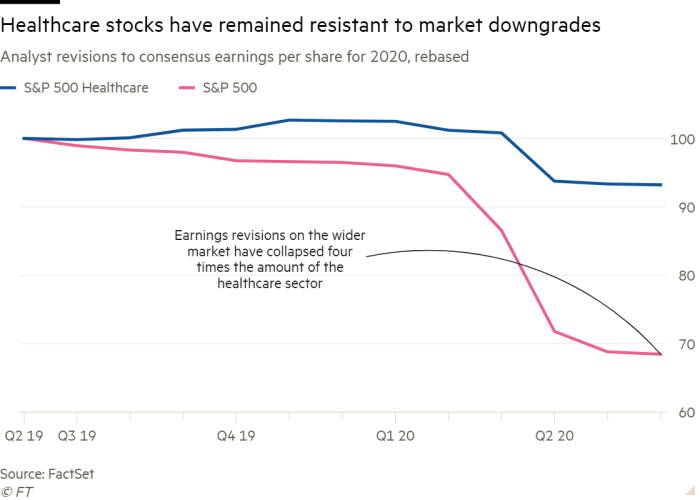 Shares in the California-based biotech group Gilead Sciences, which was at the centre of a political firestorm five years ago over a $1,000-a-day hepatitis C drug, are up 18 per cent after it became the first company to win emergency approval for a Covid-19 treatment, its antiviral remdesivir.

The stock of Moderna, a Boston-headquartered biotech, has fared even better, more than doubling after the group broke ground by getting a potential vaccine into human trials.

Nor is it just the likes of Gilead and Moderna that are now hot properties on Wall Street.

With Mr Sanders abandoning his second tilt at the White House and Donald Trump failing to follow through on his promise to protect patients from large out of pocket costs, there is rising confidence among investors that the danger to the industry’s profits from Washington has, for now at least, subsided.

How companies price their vaccines and drugs will be closely scrutinised

Alex Gold, who runs the global healthcare fund at Fidelity International, has lifted his exposure to pharma companies. Positive press for drugmakers means the “immediate short-term risk” of an overhaul of legislation on drug pricing has dissipated, he added.

If some fund managers are simply hoovering up pharma stocks as the political threat recedes, others believe the pandemic could yet herald a more far-reaching change in which US pharma companies swap what has sometimes been near pariah status for that of vital national champions.

Companies are certainly alive to the possibility.

Johnson & Johnson, the largest healthcare company and one caught up in legal battles over the opioid crisis, has, for example, promised that its vaccine, if successful, will be produced on a “not-for-profit basis”.

John Bowler, manager of Schroders global healthcare fund, said that companies appeared to see tackling the pandemic as part of a “national service”, as well as a chance to showcase the benefits the industry can bring to the US.

“The industry is doing its best to use the investment in vaccines and treatments and helping local community health systems as a means to show the positive value an innovative pharma and biotech industry can bring to society,” he said.

Wall Street has also welcomed the fact that many companies are reducing their financial risk by taking government support to develop vaccines before trials show that they work.

While the public health crisis unleashed by Covid-19 has been a boon for pharma companies, investors say the subsequent recession has done little harm to the sector’s investment credentials.

Jim Paulsen, chief investment strategist at The Leuthold Group, an independent investment research firm, said the sector was home to many “steady eddies”, or companies that produce medicines and products that consumers cannot do without.

At the same time, the sector remains fertile hunting ground for companies promising high-octane growth, with “biting edge innovative research and development”, according to Mr Paulsen.

Within Wall Street’s universe of biotechs, those that have shone brightest in the pandemic are companies with recently-launched treatments that promise rapid expansion. Vertex, a maker of a treatment for cystic fibrosis, and Seattle Genetics, which won earlier-than-expected approval for its new breast cancer drug, have outperformed.

Not every company has emerged unscathed.

The lockdowns imposed to contain the virus are likely to have hit sales of drugs that need a doctor to administer them, while the delay in non-essential surgeries has hurt others including Smith & Nephew. Last week the London-listed maker of medical devices said that a drop in the number of elective surgeries had dented revenues, and its shares are down 14 per cent this year.

Despite these pockets of pain in the sector, Emily Roland, co-chief investment strategist at John Hancock Investment Management, said that since December far fewer pharma companies had cut their earnings forecasts compared with the whole of the S&P 500. And even with the blistering rally in some stocks, Ms Roland said valuations were “attractive”, with healthcare trading at a forward price/earnings ratio of 16 times, the second lowest after financials.

If the pandemic has cast the industry in a more benevolent light to politicians and the public, sustaining that and its potential benefits will be far from straightforward.

The economic repercussions of the crisis are likely to make politicians more sensitive both to large drug bills funded by taxpayers, including the US government-backed Medicaid and Medicare healthcare programmes, and to the pain of uninsured patients.

According to a West Health and Gallup poll published last month, nine out of 10 Americans are worried that the industry will use the pandemic to raise drug prices, with two-thirds of the concerned identifying as Democrats.

Martyn Hole, investment director at Capital Group, a US investment management firm, said many pharma companies had so far focused on promoting the “greater good”. But “a fight about equitable distribution of the first vaccines may lie ahead”, he cautioned. “How companies price their vaccines and drugs will be closely scrutinised.”

If I start hearing rumours that there’s something happening [politically] that could affect the space, I may change my views

The first round in the fight erupted last week when Gilead, which has given away more than a million doses of remdesivir, announced its pricing plan for the drug.

The $2,340 it intends to charge governments for a five-day course drew immediate fire from advocacy groups for being too expensive. Gilead insisted the price was “well below” what it considers to be the drug’s benefits.

With the US presidential election just months away, the interplay of the battle for the White House and the pricing of Covid-19 treatments could yet prove toxic for the industry. Polls give Democratic presidential candidate Joe Biden a double-digit lead over Mr Trump.

Many companies have not yet said how they plan to price potential treatments or vaccines. But mis-steps will see them burst back into the Twitter feeds of politicians, shaking the new-found optimism of investors.

Max Gokhman, head of asset allocation at Pacific Life Fund Advisors, said he had been overweight healthcare and researching the sector far more closely, including interviewing those on the front lines of the Covid-19 crisis such as hospital managers.

“If I start hearing very well-grounded rumours that there’s something happening [politically] that could affect the space, I may change my views,” he said. “It is 2020.”

How is coronavirus taking its toll on markets, business, and our everyday lives and workplaces? Stay briefed with our coronavirus newsletter.