Carmakers need to take radical steps to lower the price of electric vehicles by cutting costs across offices, dealerships and suppliers, according to the chief executive of Peugeot owner PSA.

Carlos Tavares said bridging the gap between the cost of developing electric vehicles and selling them at a profit, which is currently only possible through subsidies, must be the first priority for carmakers.

“Affordability will be the challenge for the next five years in terms of costs,” he told the Financial Times. “Those breakthroughs need to come from real estate, distribution costs, sourcing all the components of cost structure will have to be combined to bring this affordability.”

Carmakers and consumers in the EU benefit from about €12,000 in subsidies for each electric car through incentives and other measures, he said.

“This is the gap that we need to close if we want to offer this to the biggest possible number of citizens, which means all sorts of cost reduction needs to be addressed to face this challenge,” Mr Tavares said.

PSA, which moved its headquarters from the Champs-Elysées to the outskirts of Paris to save money several years ago, intends to make even more radical moves by scaling back an office network vacated during the pandemic as staff worked from home.

“We are going to shrink our real estate footprint,” Mr Tavares said. “This will represent a benefit for employees. They will spend less money on transportation to go back and forth, and will have a better work-life balance.” PSA would maintain office spaces for teams to meet when necessary, he added

This change would enable the company to maintain its profitability, while ramping up sales of battery and hybrid vehicles to meet new emissions rules.

Mr Tavares’ comments come the day after PSA bucked the industry-wide coronavirus malaise to post a profit for the first six months of the year. It booked a net profit of €595m for the half, across a sector where most major players expect to make losses.

Like all carmakers operating in Europe or China, PSA is boosting its electric vehicle capabilities in expectation of a demand boom later into the decade.

The company on Tuesday unveiled a new platform that will be the base for all its models from 2025 onwards. This will underpin vehicles that can travel up to 650km on a single charge. 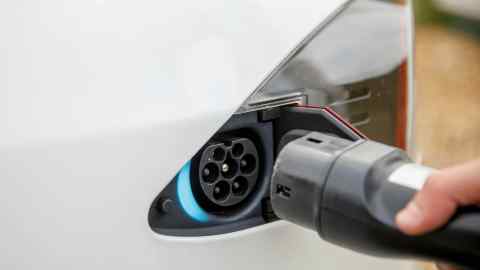 PSA’s pending merger with Fiat Chrysler, which will create the world’s third-largest carmaker by revenues, may result in the Italian-American brand shifting its vehicles on to PSA’s systems. This would be similar to the move by Opel-Vauxhall after PSA’s 2017 takeover.

“As we are two companies coming together, the assets of the two families will be available,” he said, adding that electrification of FCA’s largely North American vehicle line-up would depend on the speed of regulations in the US.

The FCA merger was agreed in December but faces close scrutiny from European competition authorities.

Although Mr Tavares has said he will be watching the cash position of the newly merged group closely, he said it was “not the right moment” to discuss FCA’s planned €5.5bn special dividend to shareholders in order to equalise the value of the two groups.

He added: “I would be arrogant if I was going to predict the future right now. The only thing we can do is to make our companies more agile, more robust and more resilient.”