Natural gas pollution at the world’s most prolific oilfield will halve in the coming months, providing an environmental upside to the worst crash in the price of crude in decades.

As tumbling demand forces producers to shut in wells across the US, analysts at Rystad Energy estimate the amount of gas flared — where drillers burn off the less valuable gas found alongside the oil — in the Permian Basin will fall from 600m cubic feet a day at the beginning of the year to below 300m cubic feet in the second half.

The drop-off is equivalent to the amount of gas required to heat half of all homes in Texas.

“In the second quarter we will definitely see a massive decline,” said Artem Abramov, head of shale research at Rystad. “More or less all fracking activities are on hold. Where there is still activity going on it is marginal.”

Flaring occurs where gas is recovered as a byproduct of oil drilling. Often a lack of infrastructure makes finding a market for the gas uneconomical, so the easiest option is to set it alight.

But the practice is highly polluting. Burning the gas emits carbon dioxide into the atmosphere. And where equipment is not up to scratch, it can also lead to methane — which traps far more heat than CO2 — being vented directly into the air. 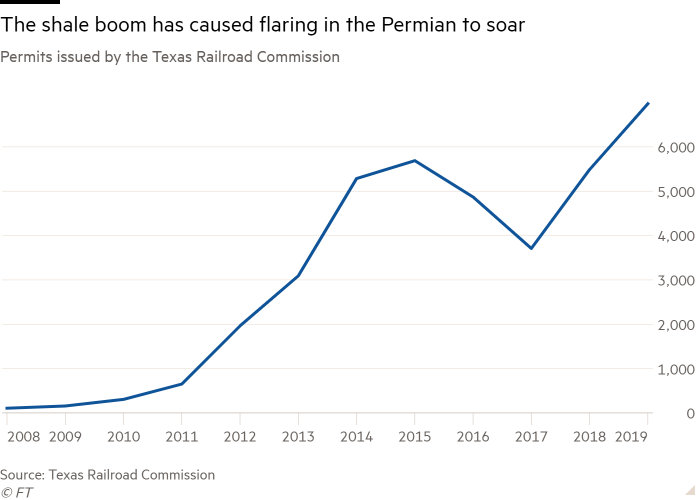 The shale boom of the past decade has caused US oil production to soar, allowing Donald Trump to boast of “energy independence”. Output surpassed 13m barrels a day in 2019, with the Permian accounting for more than a third of this.

But with the growth in production has come a rise in flaring. The Texas Railroad Commission, which regulates the practice in much of the Permian, issued almost 7,000 licences last year — more than 20 times the figure a decade earlier. Among the basin’s biggest flarers on an absolute basis are ExxonMobil-owned XTO Energy, Diamondback E&P and Encana Oil and Gas, according to the regulator.

However, smaller, private equity-backed companies, eager to make quick returns, tend to be the worst offenders, analysts said. The Railroad Commission lists small-time producers including Continental Trend Resources, Siltstone Resources and Mammoth Exploration — which only produce a few hundred barrels of oil a day between them — as having the worst record for flaring relative to output.

“Typically, companies that flare are undercapitalised,” said Taku Ide, an analyst at the Rocky Mountain Institute, an environmental group. “Companies that have reputational risks will put in takeaway capacity and design systems that minimise venting and flaring.”

Measures introduced to stem the spread of coronavirus, locking down populations and restricting travel, have caused oil demand and price to plummet. In April, US benchmark crude prices traded in negative territory, meaning producers were, in effect, paying to have supply taken off their hands. While prices have now rallied slightly, West Texas Intermediate, the US marker, remains down by about half since January.

The price crash triggered a sharp fall in drilling activity — and with it flaring, reducing emissions levels. But analysts were split over whether the environmental effects would be lasting.

Improved infrastructure should lead to reduced levels of flaring when production picks back up, according to Mr Abramov. But Colin Leydon, a director at the Environmental Defense Fund, said any benefits were likely to be shortlived.

“I don’t think there is any doubt that flaring is decreasing in the short term,” Mr Leydon said. “But if and when prices recover, there’s no reason to expect it won’t go back up. There has been no change in the underlying dynamics.”

As with the drop in global greenhouse gases from lower industry and transport emissions during the lockdown, he said, “nobody expects it to hold”.