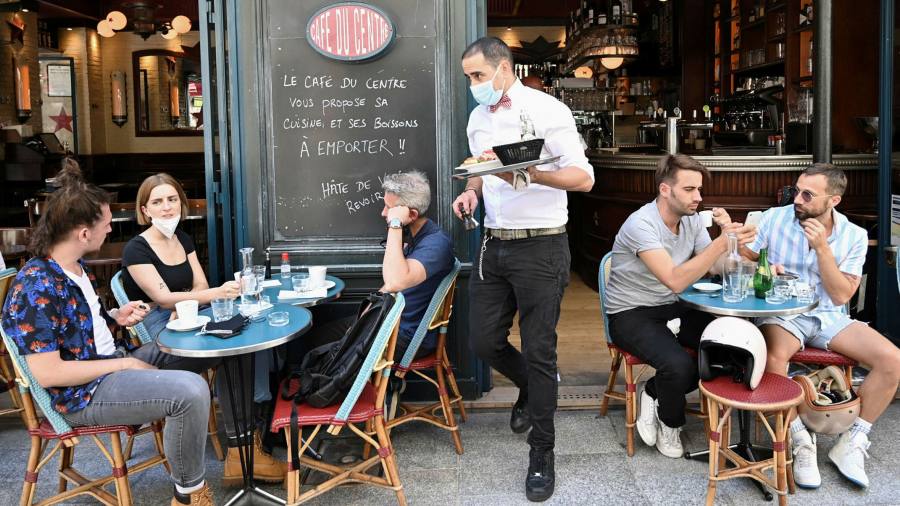 Right now, Paris is a giant street party. Sidewalk café tables spill on to streets where makeshift patios and parasols replace the now-blocked cars. When France began its first phase in the easing of the coronavirus lockdown on May 11, cafés, bars and restaurants threw open their doors, creating newly-zoned outdoor spaces.

Since the first days of déconfinement, Parisians have embraced with gusto a return to normal life that interprets liberally the official guidelines of social distancing and wearing masks. Judging by the festive outdoor hubbub, the feeling of risk has dissipated. At 5 Pailles, a trendy brunch spot in the 10th arrondissement, a densely packed line snakes around the corner on weekends. Bengisu Gunes, a partner in the restaurant, says business has never been better: “It’s like a placebo effect,” she says of the desire to come out again. “Or maybe it’s the French culture — a little revolutionary.” Meanwhile in Britain, where restaurants and pubs reopened on July 4, three-fifths of Britons still don’t feel comfortable dining out, according to an Office for National Statistics survey.

While the bise, the traditional French double-cheek kiss, is still avoided, other pre-Covid-19 practices have come right back. The offices of one large communications agency that employs hundreds of people is already fully staffed, says a vice-president who asked not to be named. Early days of one-way staircases and social distancing quickly gave way to old habits of sitting side by side in open space layouts, he says.

France has suffered the third-highest total of Covid-19 deaths in Europe, and sixth in the world. But it has been averaging only about 500 new infections a day for the past month and last week the government confirmed the end of the health state of emergency. With the warm weather and the start of the summer holidays, the French easing of lockdown has felt like a sigh of relief.

Many Parisians feel they deserve this release. According to the Oxford Covid-19 government stringency index, in Europe, France ranks second only to Italy in the intensity of lockdown measures. More than 915,000 fines were issued in the first six weeks of confinement. But initial mixed messages about the necessity of masks created mistrust, leading to a general sense of having been infantilised by draconian measures.

Although the state of emergency is over, restrictions on movement and gatherings remain in place. Many Parisians believe they have sacrificed enough personal liberty already. As Erwan Heurtel, a Paris mergers and acquisitions lawyer, says about his own practice — at a time when global deal making has dropped to its lowest level in a decade — “optimism is the rule now!”

The cheery mood contrasts with what is likely to await in the autumn. The OECD predicts that France’s economy will be among the hardest hit and the European Commission last week further slashed growth forecasts for France, Italy and Spain.

Until now, the French have enjoyed a protective bubble, with up to 50 per cent of workers benefiting from the government’s generous job support scheme, compared with just 21.7 per cent in Germany. But the scheme ends in September and coronavirus-related job losses are expected to be between 700,000 and 1m. Flagship companies are already announcing big cuts — 5,000 at Airbus and 7,500 at Air France — but even more insidious are the thousands of smaller-scale job cuts taking place all over the country.

President Emmanuel Macron warned last week that the rentrée, the country’s ritual return to work and school in September, “will be very hard”. An editorial in the right-leaning daily Le Figaro went further, saying it would be “apocalyptic”. Other French media take a less-damning view, but the reality is chastening. The pandemic led Mr Macron to pause controversial pension and labour reform plans that prompted national strikes and gilets jaunes protests. But now the president has asked the new prime minister, Jean Castex, a right-leaning technocrat, to prioritise pushing the changes through.

France’s summer renaissance is delicious and festive and has been a personal — guilty — pleasure. It will most likely be shortlived. But meanwhile, optimism is the rule!