The Covid-19 pandemic has triggered a bumper crop of corporate share sales as distressed companies look to shore up their balance sheets and opportunists tap the market to expand or snap up cheap deals.

Globally, 201 companies have issued equity valued at $50m or more since March 1, generating more than $67bn in total, according to data from Dealogic. The most active sector was healthcare, in which 68 companies issued $18.5bn-worth of shares, and the busiest region was the US, where 104 of the companies raised fresh equity.

UK catering group Compass raised the most — $2.4bn — after its sales were decimated by the impact of the pandemic, followed by Southwest Airlines, which raised $2.3bn.

“The issuance market has been very vibrant. We initially saw companies coming to market for liquidity calls and we’re now seeing people on the front foot being more opportunistic as stock prices have recovered,” said Tom Johnson, head of equity capital markets for Emea at Barclays.

As the pandemic took hold and financial markets were upended, sectors including leisure, travel and retail were plunged into crisis.

Some of the worst affected turned to their shareholders to stay afloat: early movers at the start of April included UK high street retailer WHSmith, which issued $204m in new equity, and cruise line operator Carnival, which issued $575m in shares as part of a $6.25bn rescue package.

As the initial panic began to subside, others, in the healthcare sector especially, took advantage of the slide in asset prices and raised cash to fund expansions. 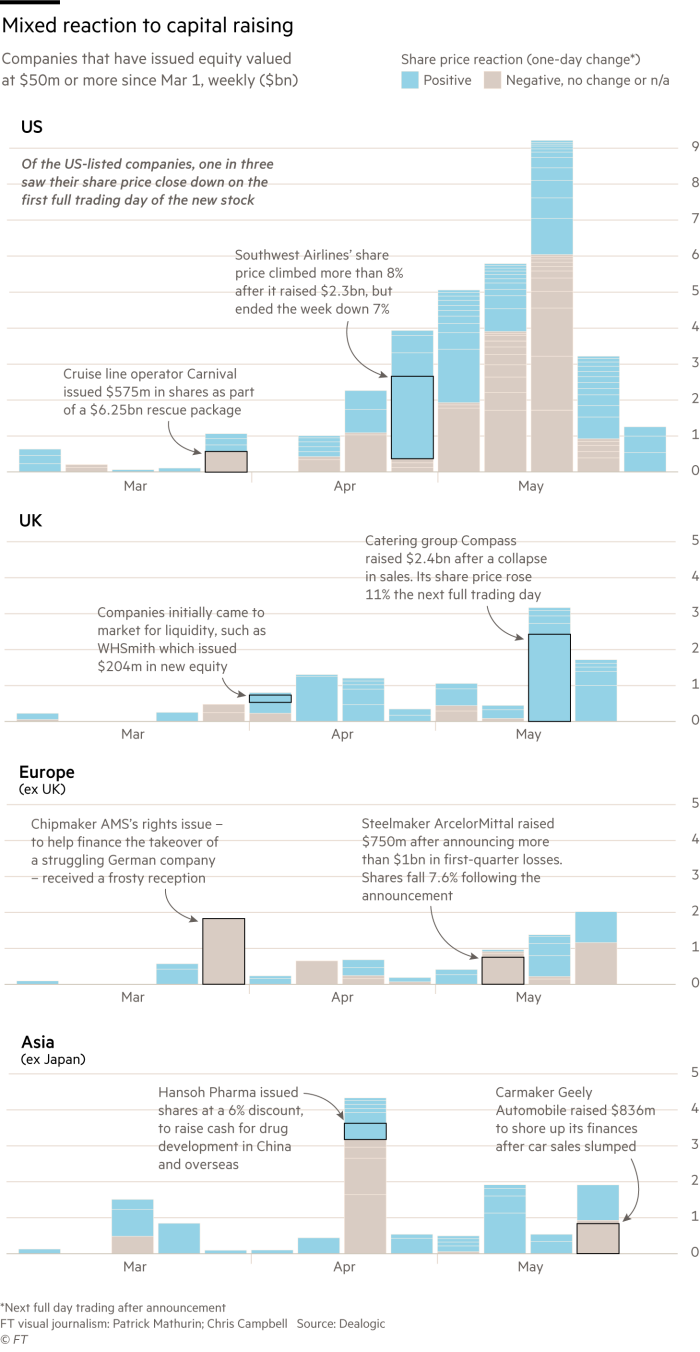 Fabian de Smet, global head of equity syndicate at Berenberg, said companies had raised an “incredible” amount in the circumstances, and investors had been “very supportive”. About 40 per cent of the proceeds have been raised by healthy companies, which understood that “in each crisis there is an opportunity”.

Finding cash quickly has been easier for some than others. In the UK, a host of companies have taken advantage of the so-called “cash box” placing, which allows them to bypass pre-emption requirements and rapidly issue up to 20 per cent of their existing share capital.

Elsewhere in Europe, where the cash box is not an option, some distressed companies had turned to government support schemes and the bond market, said Julian Stanier, a partner at Pinsent Masons who specialises in corporate finance.

Many US companies have chosen to issue convertible bonds alongside equity, which can be exchanged for stock if certain conditions are met.

These can be a cheaper option for companies unable to borrow at high interest rates. In April, the amount raised monthly in US convertible bonds reached its highest point since May 2008.

Compared to 2008, banks’ balance sheets are “in much better shape” and “liquidity is the main source of concern” for struggling companies, said a Berenberg note last month. It added that many of the companies hit by the pandemic did not need to raise sums large enough for a rights issue — a slower process that requires the publication of a prospectus.

But one-off equity raises will not be enough for those worst affected, such as airlines, the note added: as in 2008, “we can expect the size of deals to reach into the billions quite quickly once the rights issue tap is open”.